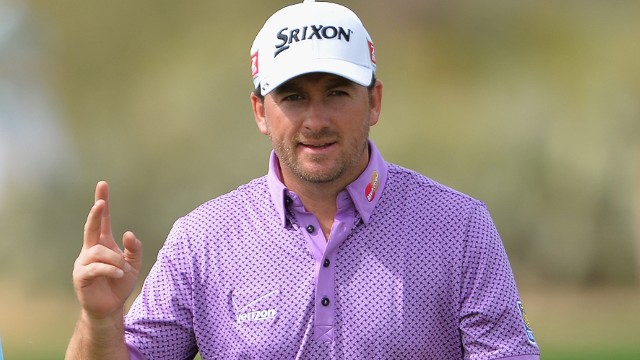 (CNN) -- Things might be a bit frosty between Graeme McDowell and Gary Woodland in Lake Nona for a little while.

The 2010 U.S. Open champion from Northern Ireland lives on the same Florida street as his American counterpart, they often practice together, and they flew out to the Arizona desert together.

But that didn't stop McDowell staging a dramatic comeback to win their opening round encounter at the WGC Accenture World Match Play.

Woodland was four up at one stage, and three holes up with three to play, before a string of errors opened the door for McDowell.

Read: Stenson - How to lose and win a fortune

And the 34-year-old needed no second invitation, winning the final three holes, then the first extra hole, to take his place in the second round.

"I thought it was over. You're not coming back from three down against a guy that's playing as well as him. Yeah, I'm still going to try to hit my shots. But it required a mistake from him to give me half a sniff, even.

"I'm surprised to be sitting here, having won. Yeah, I hit a couple of quality shots down the last couple of holes, but he had mistakes, as well. It's a brutal format.

That's what you call experiencing every emotion today. What a player @GaryWoodland is. Got lucky to beat him. I'm good in the 19th though!

English duo Ian Poulter and Luke Donald -- both former winners of the event -- were two high-profile casualties in Arizona, dumped out by two men over ten years their junior -- Rickie Fowler and Matteo Manassero.

Poulter, who claimed the title in 2010 and is regarded as one of the finest match players in the game due to his Ryder Cup exploits for Europe, trailed early to Fowler, from California, and failed to recover, losing 2&1.

The 38-year-old was widely credited with sparking the fight back that led to the 'Miracle of Medinah' when Europe recovered from a 10-6 deficit to the United States to win the 2012 Ryder Cup in Chicago.

But after slumping to a first round defeat he Tweeted: "Disappointed with my performance today do not deserve to move on. Congrats to Rickie Fowler."

Fowler, who has suffered a frustrating start to his 2014 season, told the tournament's official website his victory could kick-start his campaign.

Disappointed with my performance today do not deserve to move on. Congrats to @RickieFowlerPGA.

"It feels like a big win after those missed cuts," Fowler said. "It was nice to be the underdog. I had nothing to lose."

Donald, who assumed the WGC crown from Poulter in 2011, was on the end of a comprehensive defeat, losing 6&5 to Manassero, from Italy.

The 20-year-old seized the initiative early on in the piece and ensured the match didn't go beyond the 14th hole.

Despite his bruising victory, Donald was still pleased with aspects of his game, tweeting: "Manny played great today and deserved to win, my game is close, excited for the next 3 weeks."

Top seed and world No. 3 Henrik Stenson, from Sweden, trailed Kiradech Aphibarnrat of Thailand with five holes to play but ended up winning on the 17th hole.

Three-time major winner Rory McIlroy safely made it through to the next round after beating American Boo Weekley to make it into the last 32.

Bubba Watson, who won the Northern Trust Open on Sunday, safely moved into the next round, defeating Mikko Ilonen of Finland, while last year's champion -- Matt Kuchar -- also progressed by beating Bernd Wiesberger.