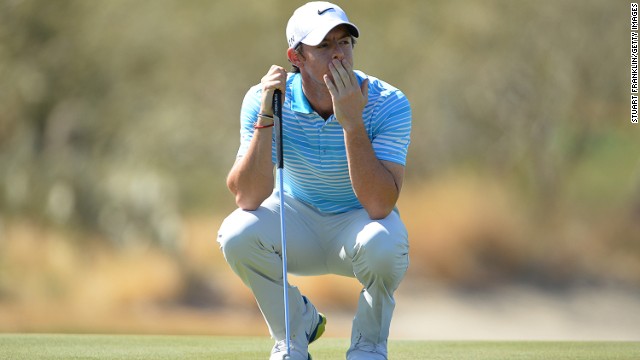 (CNN) -- The big names just keep on falling in the desert.

Rory McIlroy, Justin Rose and Henrik Stenson all departed the WGC World Match Play in Arizona on Thursday, meaning all four top seeds are now out.

A surge late in his back nine put McIlroy, a three-time major winner, into pole position to win his contest with Harris English on the 16th hole, but English bounced back immediately to win the 17th.

The pair halved the final hole but a wayward drive from McIlroy on the first playoff hole plunged him into trouble he couldn't extricate himself from, as English booked a tie against fellow American Jim Furyk.

"He played really solid today and didn't really do much wrong, didn't really give me anything," McIlroy told the tournament's official website about his battle with the 24-year-old from Georgia.

"I don't feel in any way disappointed leaving so early because I feel like my game is there. I'm looking forward to the next couple of weeks."

Stenson, who won both the Fed Ex Cup and the Race to Dubai in a stellar 2013, was ousted from the tournament by 2010 British Open champion Louis Oosthuizen.

The Swede trailed from the very first hole and never recovered, eventually falling to a 4&3 defeat, his South African opponent booking a third round clash with 2012 U.S. Open champion Webb Simpson, who beat compatriot Brandt Snedeker.

Justin Rose, the reigning U.S. Open champion, battled all the way with South African Ernie Els before succumbing on the second playoff hole after the veteran pulled off an incredible shot from the lip of a bunker.

Disappointing not to advance today but @Harris_English was very solid. Positives to take from the last 2 days. Looking forward to the Honda!

"It was one of those once-in-a-lifetime shots, really," Els told the tournament's official website after setting up a meeting with US PGA champion Jason Dufner.

"I caught it a smidgen thin, and it just came out perfectly. It hit the bank and just trickled over to about four feet. It was an impossible shot, but it was obviously the right one at the time."

Awesome match with Rory today..a grind until the very end. Such a genuine guy and fierce competitor. Very fortunate to be moving on!

For the second day in a row Graeme McDowell fought back from a perilous position to book his place in the next round.

The Northern Irishman was two down with four to play but ended up beating Hideki Matsuyama of Japan on the 18th green. "I thought I was dead and buried both days," McDowell said.

He will now face American Hunter Mahan, who he famously beat in the 2010 Ryder Cup singles at Celtic Manor in Wales to secure the trophy for Europe.

In two days I have not struck a tee shot whilst ahead in the match!!! Only stood on 4 tee boxes at all square and 3 of those were the first!

And Bubba Watson, who is just weeks away from the defense of his Masters crown, defeated Jonas Blixt of Sweden to progress to a match against France's Victor Dubuisson.