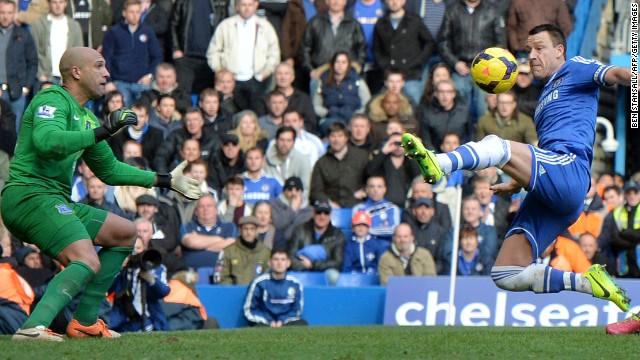 (CNN) -- After being humbled by Manchester City in the FA Cup and drawing against West Bromwich Albion in the English Premier League, Chelsea could hardly afford to drop points against Everton on Saturday.

And it was the man who has been dubbed 'Mr. Chelsea,' the returning John Terry, who struck deep in injury time following a free kick from another Chelsea veteran, Frank Lampard.

Both were re-introduced to the starting lineup by manager Jose Mourinho against a stubborn Everton side chasing a European spot and the 1-0 victory temporarily increased Chelsea's lead atop the table to four points over Arsenal.

The Gunners, however, once again cut the deficit to one point by later easing past Sunderland 4-1 and Man City stayed within three points of Chelsea -- with a game in hand -- courtesy of a 1-0 win over Stoke City.

Vintage Chelsea it wasn't, but the result was all that mattered to Chelsea skipper Terry.

"We made it difficult but they are a very good side and are playing well under (Everton manager Roberto) Martinez," Terry, sidelined the previous three games with a muscle injury, told BT Sport. "It was a tough game today. We're delighted with the win and three points."

He felt the free kick -- given when Chelsea midfielder Ramires went down -- shouldn't have been given by referee Lee Probert.

"It was one of those situations where players were trying to buy too many free kicks," Martinez told BT Sport. "You need a strong referee. The second half is a very, very tough game for referee.

"You can see they are trying to get a dead ball situation because they couldn't get any joy from open play. You can see the reaction and way he loses his footing, it's not because of contact. He is looking for the free kick."

For more than 90 minutes, Everton indeed kept Chelsea at bay.

Everton had the better of play in the first half, with Petr Cech saving from Leon Osman and Kevin Mirallas scuffing his shot when in a good position at the edge of the box.

Chelsea could only go one way -- up -- and keeper Tim Howard foiled Lampard, Eden Hazard and Branislav Ivanovic before Terry's winner.

"Great ball from Lamps," said Terry. "I just managed to get a touch on it and I think it came off Howard in the end as well."

Olivier Giroud, benched against Bayern Munich in favor of the inexperienced Yaya Sanogo, started and scored twice for Arsenal.

Arsene Wenger, though, left record signing Mesut Ozil out of the squad after he missed a penalty against Bayern and was criticized on the pitch by teammate Mathieu Flamini on Wednesday for not doing enough defensively.

Pitfalls of the premier football leagues

Dressing for success on football field

City toiled against Stoke City at home, getting the lone goal from midfielder Yaya Toure in the 70th minute.

"Teams come here to defend and try to get a draw," City manager Manuel Pellegrini told the club website. "We cannot win by three or four goals every match."

Next up for City is Sunderland in the League Cup final on March 2.

West Ham further eased its relegation worries by beating Southampton 3-1 for a fourth straight victory, Hull added to Cardiff's woes by thrashing the Welsh side 4-0 in Wales and Felix Magath earned a point in his managerial debut for last-place Fulham, with the Cottagers tying West Brom 1-1.

Wayne Rooney, who signed a lucrative contract extension with Manchester United on Friday, celebrated with a goal in United's 2-0 win at Crystal Palace.

"He's a really important player," United manager David Moyes told Sky Sports. "You think about the amount of clubs who wanted to sign him. Wayne is one of the top players, he shows it week in, week out.

"We never had any intention of letting him go. Wayne has been great since day one."

Yet United still trails Liverpool by eight points in the race for the final Champions League spot.

Liverpool hosts Swansea on Sunday while Tottenham, in fifth and three points behind the Reds, visits Norwich.