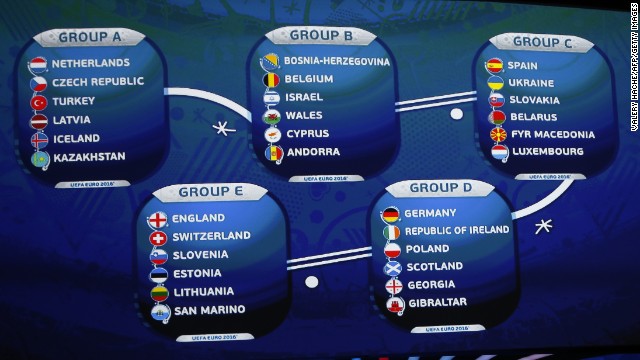 The Euro 2016 qualifying draw was held in Nice, France on Sunday.
STORY HIGHLIGHTS

(CNN) -- With more teams than ever playing at football's Euro 2016, the chances of a powerhouse not qualifying are even slimmer than before. But the expanded field -- from 16 to 24 -- means there could be a few debutants in France in two years.

Sunday's qualifying draw didn't produce a group of death, and the likes of two-time reigning champions Spain, the consistent Germans and always dangerous Italy shouldn't be sweating it out come the end of qualifying.

Spain landed in a group with Ukraine, Luxembourg, Belarus, Macedonia and Slovakia -- and of the latter quintet, only Ukraine features in the top 50 in the FIFA world rankings.

Gibraltar, population 30,000 and about to embark on its first qualifying campaign, drew the mighty Germans along with Ireland, Poland, Scotland and Georgia.

England was paired with, among others, Switzerland -- the nation England boss Roy Hodgson used to guide.

As host, France is guaranteed a berth in the tournament but will be placed in a group where it will essentially play friendlies. In this case, Les Bleus can look forward to facing Cristiano Ronaldo's Portugal.

"Now we know the 10 games we have to play," France coach Didier Deschamps was quoted as saying by UEFA. "It's pretty good to play a team like Portugal, as they will be prestigious matches."

UEFA president Michel Platini said Germany and England were two of the three member associations who opposed increasing the Euro 2016 field but the Frenchman wasn't fussed. He didn't name the other member association against the move.

"In any democracy, when the vast majority are in favor, you go forward with it even if England or Germany aren't for it," he told reporters this week. "The five or six biggest teams don't have much to worry about, but for the others it will be very competitive.

In another change, teams contesting two matches in one qualifying round will either play on a Thursday and Sunday, Friday and Monday or Saturday and Tuesday as part of UEFA's "week of football" initiative.

Currently, international matches are mostly played on Fridays and Tuesdays.

"It was a political decision," Platini, a former European footballer of the year, said. "We took it to try and promote the football of national teams.

"Clubs play on almost every day of the week and as a result, international football has been pushed out of the limelight and we would like to see it take that limelight again."

Qualifying starts in September, two months after the World Cup in Brazil concludes.