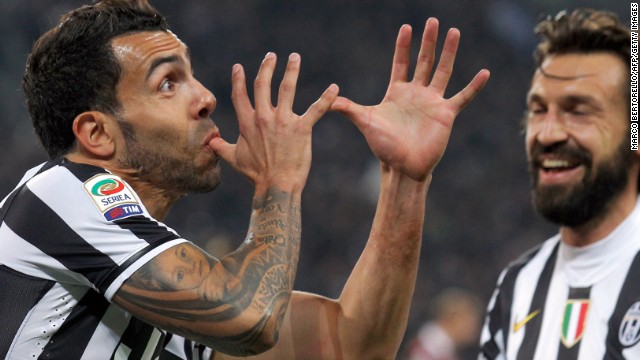 (CNN) -- With Torino pushing for a Champions League spot in Italy's Serie A, the Derby della Mole promised to be interesting. Torino hadn't beaten Juventus for about 20 years but has been a surprise package this season and possesses two of the league's top strikers in Alessio Circi and Ciro Immobile.

A striker did shine Sunday, although it was Juventus' Carlos Tevez.

Tevez scored the only goal in the first half and Juventus restored its nine-point advantage over Roma atop the division with a 1-0 win.

Juventus mostly stifled Torino as it extended its unbeaten spell in Serie A to 17 games, though the visitor felt it should have gotten a penalty late in the game.

Tevez's effort in the 30th minute put the Argentine tied first in the league scoring charts with the injured Giuseppe Rossi and what a goal it was.

He controlled a low, fiercely struck pass, turned and scored on a half volley from outside the box.

"It's one of the few times Torino were able to play against us with no pressure, thanks to the great campaign they are having," Juventus keeper Gianluigi Buffon said in comments posted on the Football Italia website. "It was a real derby, quite an English style one with the referee letting the action run.

"Compliments to Torino, as their performance made it really difficult for us. In a complicated and balanced encounter like this, the difference is made by those moments of magic from a champion. We've got several and today Carlos was decisive."

Veteran Italian international Andrea Pirlo celebrated with Tevez and Pirlo was involved in the penalty claim in the 80th minute. Omar El Kaddouri went down and Torino thought he was tripped but the referee allowed play to continue.

'Bayern relentless' was the headline used by the Bundesliga's website after it crushed Hannover 96 4-0 and that about sums it up. Bayern registered a 14th straight win in the Bundesliga, hasn't lost in the league in 47 matches and blanked Arsenal in the Champions League on Wednesday.

Thomas Muller and Thiago Alcantara gave the reigning European champion a 2-0 lead at the break and Muller and Mario Mandzukic added strikes in the second half.

"It took a while before we found our rhythm," Bayern manager Pep Guardiola told the club website. "We played very well once we'd scored. It was a chance to extend our lead over our rivals -- and my lads have done just that."

In more good news for Bayern, inspirational midfielder Bastian Schweinsteiger made his first start since sustaining an ankle injury in November and played more than 70 minutes.

"It felt good to be back in the starting lineup and not to have any problems," he said. "I'm feeling much better and my fitness is improving too."

Not accustomed to competing in the knockout stages of the Champions League, maybe Atletico Madrid's 1-0 win at AC Milan last Wednesday took its toll.

An unusually sluggish Atletico conceded three goals in the first half and lost 3-0 at relegation threatened Osasuna to miss a chance to join Real Madrid on 63 points atop Spain's La Liga.

"It was a good match for them in the first 25 minutes," Atletico manager Diego Simeone told his club's website. "In the second half we lifted the team level and at least played the game. You can lose and would rather lose like we did in the second half."

It was a fine weekend for Real Madrid, given Barcelona also lost Saturday and remained on 60 points.

Atletico hosts Real Madrid next week and current world player of the year Cristiano Ronaldo is expected to feature for Los Blancos after serving his three-game ban.