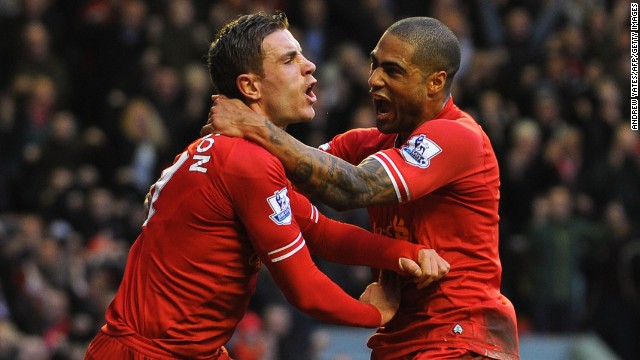 (CNN) -- Newcastle wasn't the opposition but there was another seven-goal classic at Anfield.

Jordan Henderson scored deep in the second half to give Liverpool a 4-3 win over Swansea City, rekindling memories of the Reds' victories over Newcastle by the same score in 1996 and 1997.

Liverpool manager Brendan Rodgers wasn't afraid to say this month that his men were title contenders and with the offense flowing, his team trails Chelsea by a mere four points atop the standings.

Daniel Sturridge -- second behind only teammate Luis Suarez in league scoring -- netted for an eighth straight Premier League outing to close in on Dutchman Ruud van Nistelrooy's record of 10.

"It was an important win for us," Rodgers told Sky Sports. "We certainly weren't at our best today but the offensive part of our game, which is very strong, came out on top again.

"It's an outstanding result for us and the game typified the character of this team."

Liverpool looked set to cruise when Henderson and Sturridge gave Liverpool a 2-0 lead within 20 minutes.

But Swansea, under newish boss Garry Monk, didn't cave in.

Jonjo Shelvey began a comeback against his former club and Wilfried Bony made it 2-2 in the 27th minute.

After Sturridge and Bony traded goals -- the latter's second came via the penalty spot -- Henderson settled the affair in the 74th minute when he scored on his own rebound.

A rejuvenated Henderson has been another bright spot for Rodgers this season but the defense is a worry. Defender Martin Skrtel particularly struggled Sunday, giving away the penalty when he clashed with Bony.

Liverpool has conceded 35 goals, the most of any team in the top seven.

"As always as a coach, you'll analyze where you can be better, and we're looking to improve (on defense) for next week," said Rodgers.

The top four all won this weekend but fifth-place Tottenham suffered a blow in its chase for a Champions League spot, losing 1-0 at relegation threatened Norwich City.

Loic Remy scored in second-half injury time to give Newcastle a 1-0 win against Aston Villa at home, leaving Villa, like Norwich, four points above the relegation zone.