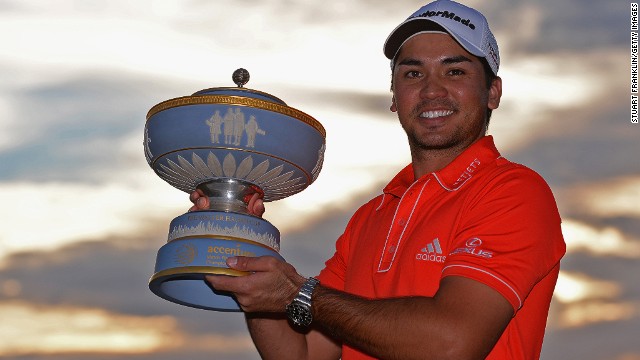 (CNN) -- They were miraculous escape shots even the late, great Seve Ballesteros would have been proud of.

Twice during sudden death on the extra playoff holes of a titanic WGC World Match Play final, Frenchman Victor Dubuisson looked as if he were about to hand the trophy to his opponent on a plate.

And twice Australia's Jason Day could only smile and shake his head as Dubuisson channeled the spirit of Spain's golfing maverick to extricate himself from the bushes of the Arizona desert.

But the 23-year-old's luck couldn't hold and finally, on the fifth extra hole, Day sealed the biggest victory of his career to date.

Read: Stenson on how to lose a fortune

"At that time, you're just thinking, 'Do I need to just hand him the trophy now after those two shots?'" Day told the tournament's official website of Dubuisson's second ridiculous escape shot.

"I kept shaking my head because there was a couple of times there where I thought he was absolutely dead -- the tournament was mine," Day said.

But he should have known better. Dubuisson took care of South Africa's Ernie Els in the semifinal, played early on Sunday, and went into the final aiming to become the first Frenchman to win a PGA Tour title.

Day, who toppled America's Rickie Fowler in his semi, was three up after nine holes before his French opponent started clawing his way back into the final and made a vital downhill putt on the 17th to reduce the gap to just one.

Needing to win the final hole to force sudden death Dubuisson held his nerve to make a short putt after an exquisite shot from a greenside bunker.

Then the fireworks truly began.

Having flown his approach shot over the back of the first extra hole, his ball landed in cacti bushes and looked to be unplayable.

But Dubuisson hovered above the foliage before pulling off a miraculous shot that dribbled to within four feet of the hole, to extend the match.

At the next hole Dubuisson again missed the green, his ball resting against the root of a small bush. Once again he dazzled the gallery with an improvised shot that allowed him to halve the hole.

It doesn't matter who wins, Victor Dubuisson is my new hero!! #magic

"I walked over there and it was in a tree, a flower tree of some sort, in this little crevice. I mean, it looked absolutely dead," Day said. "I'm like, 'Yes.' I hit 8-iron into 20 feet. There was so much pressure on him. And he does it again."

"Those two shots were amazing," Dubuisson said. "I just played it like I had nothing to lose."

Finally, at the fifth extra hole and with light in the Arizona desert fading, Dubuisson succumbed, missing a long putt for birdie, as Day sank his from three feet.

Those may be the two best escape shots I've ever seen. Allez Victor. #rydercup2014

"The biggest thing was, 'How much do I want to win?" I kept saying that to myself. Last night, I kept visualizing myself with the trophy. I'm glad I could finish it off. But it was a close one."

Day pocketed a cool $1.53 million for his victory and, remarkably, never trailed once during the final 53 holes he played in the tournament.

"I'm disappointed because I made some terrible shots," Dubuisson said after his defeat, adding of those two Seve-like escapes: "Those two shots were amazing," Dubuisson said. "I just played it like I had nothing to lose."