Meyers took over the "Late Night" chair from former "Saturday Night Live" alum Jimmy Fallon, who arguably had a great run as that show's host as he crafted now-pop culture favorites like "Slow-jamming the News" and "The History of Rap."

So how did Meyers do with his debut? The reviews are in, and they range from "meh" to middling.

The Daily Beast, which thought Meyers got "off to a rocky start on 'Late Night,'" noted that the newcomer "had a few missions to accomplish when we ran into him on Monday night."

From 'Saturday Night' to 'Late Night' 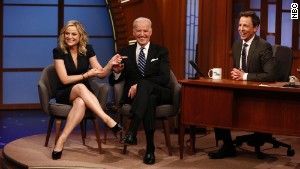 "He had to prove that Fallon's reign isn't a fluke, that late night really can be a home for the affable and good-natured," the Daily Beast's Kevin Fallon wrote. "And, most importantly, he had to show that the acute and observant brand of humor he displayed for 12 and a half years on 'Saturday Night Live,' many of those years spent as head writer and host of 'Weekend Update,' translates to the late-night talk show format."

Fallon (we are assuming no relation to Jimmy) said it was "mission only sort of accomplished."

Jimmy Fallon's debut on "The Tonight Show" last week was as big as his personality. It featured a performance by the band U2 and plenty of laughs with guest Will Smith and some of Fallon's famous friends, including Stephen Colbert and Tina Fey. Meyers also got a little help from his friend Amy Poehler, who was one of his first guests along with Vice President Joe Biden. Poehler, and Meyer's former "SNL" castmate, Fred Armisen was also part of the show as the leader of "Late Night's" band.

Meyers even paid homage to Fallon in the form of a letter he wrote to his predecessor, and which he read during the opening of the show. So many nods to his "SNL" past seemed to make sense to The Los Angeles Times, which observed that Meyers' "monologue was reminiscent in style and cadence to his 'Weekend Update' segments, full of rapid-fire one-liners about the day's headlines."

"Though he lacked the giddy enthusiasm that marked Fallon's first 'Tonight' outing last week, Meyers frequently acknowledged the show as a work in progress, noting that a monologue joke about UPS had bombed with the studio audience and making fun of his low-budget graphics," the L.A. Times' Meredith Blake wrote.

Entertainment Weekly's Darren Franich gave the debut a grade of "B."

Music critic Ken Tucker was impressed, tweeting, "Jeez, @sethmeyers @LateNightSeth makes eye contact, subtly refers to cards, responds to what guests say ... he's, like, an actual TALK show host!" Others, too, seem willing to give Meyers some time to find his footing.

Michael Starr of the New York Post wrote that Meyers "eventually found his sea legs and drove his new 12:35 p.m. show to a solid, if unspectacular, debut. ... He's charming with a certain 'aw shucks' demeanor that doesn't seem forced or contrived, and he'll have plenty of time to grow into his new role as a late-night host," Starr said.