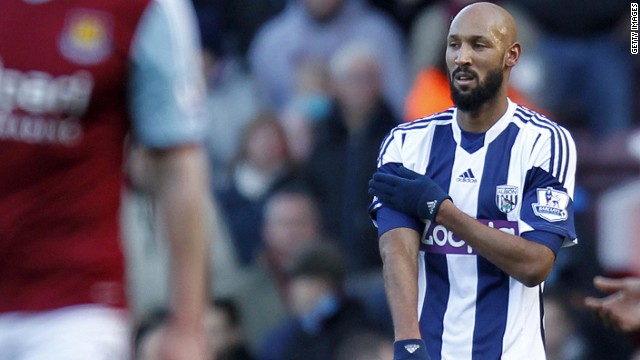 Nicolas Anelka has been handed a five-game ban by the English Football Association.
STORY HIGHLIGHTS

(CNN) -- French soccer star Nicolas Anelka has been given a five-match ban and fined £80,000 ($130,000) by the English Football Association (FA) for making a "quenelle" gesture in a game last year.

The West Bromwich Albion striker was charged by the FA on January 21 after making the gesture in an English Premier League match against West Ham United on December 28.

The "quenelle" which involves pointing a straightened arm downwards while touching the shoulder of that arm with the other hand, is believed by some to be a Nazi salute in reverse and has been linked with anti-Semitism in Anelka's homeland.

"We did not find that Nicolas Anelka is an anti-Semite or that he intended to express or promote anti-Semitism by his use of the quenelle," the Regulatory Commission said in a statement.

In addition to the ban and fine, Anelka has been ordered to undertake a "compulsory education course," the FA said.

The 34-year-old, who denied the charges and asked for a personal hearing, commented on Twitter after the match that the gesture was "a dedication" to the French comedian Dieudonne M'Bala M'Bala before adding: "I am neither racist nor anti-Semitic."

Known as Dieudonne, he has popularized the "quenelle" gesture in France and faces investigation by the Paris prosecutor's office for his controversial stand-up routine.

During a performance, he said of a prominent Jewish journalist: "Me, you see, when I hear Patrick Cohen speak, I think to myself: 'Gas chambers ... too bad (they no longer exist)."

Anelka has seven days to appeal the decision.

The Independent Regulatory Commission stated it will reveal how it arrived at its decision "in due course."