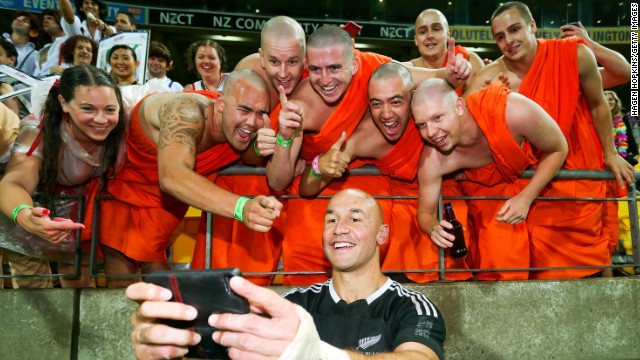 New Zealand captain D.J. Forbes celebrates with fans dressed as the Dalai Lama after his team won the final of the Wellington Sevens in February 2014. 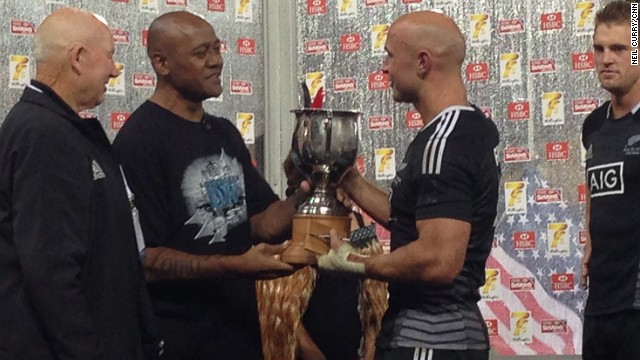 Forbes was presented the trophy by New Zealand rugby legend Jonah Lomu, who was an ambassador for the HSBC Sevens World Series event. 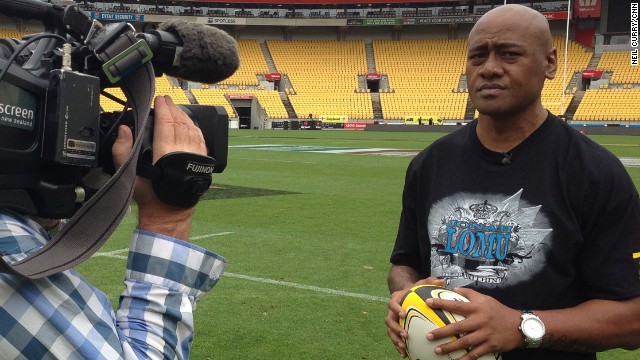 Lomu, who played in Wellington at the end of his domestic career, also presented the February edition of CNN's Rugby Sevens Worldwide show. 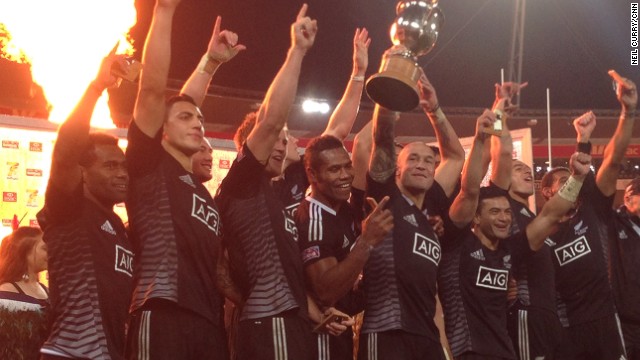 The All Blacks' victory in the final against South Africa was greeted by the usual fireworks at such events. 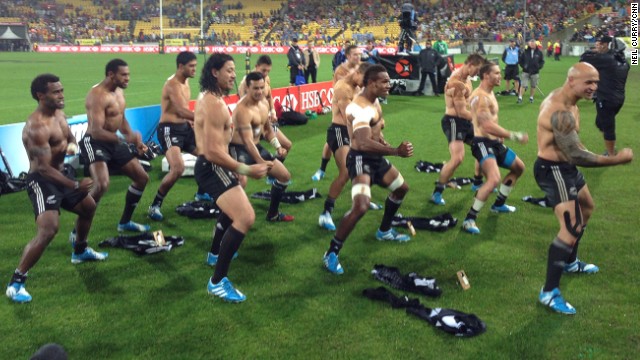 The Kiwi team treated the crowd to a trademark "Haka" -- a traditional Maori war dance. 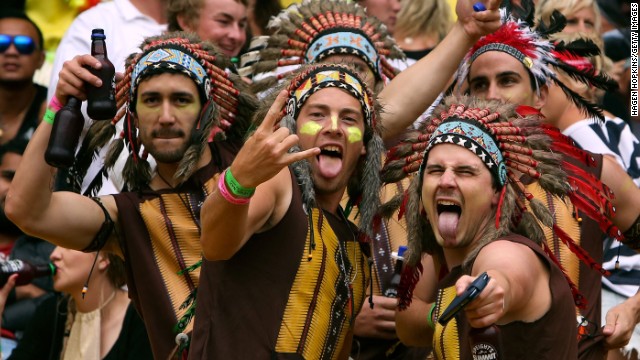 Sevens tournaments are known for their party atmosphere, and the New Zealand leg of the nine-city series was no exception. 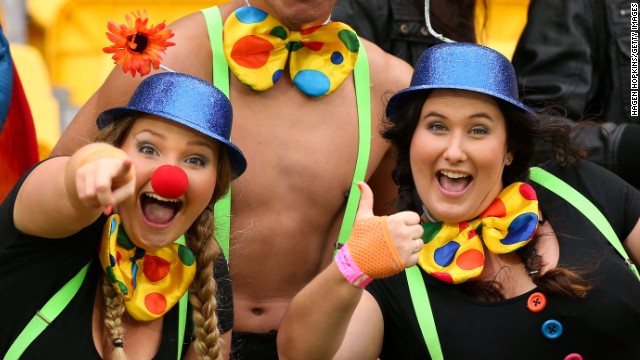 It is traditional for sevens fans to turn up in all manner of fancy dress. 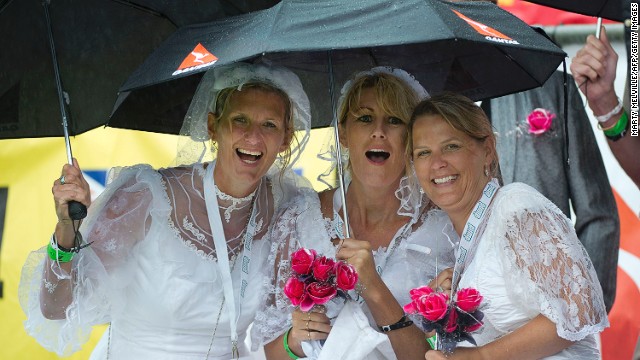 (CNN) -- The Dalai Lama bows in deference to the great man. He's joined by 20 other Dalai Lamas, assorted superheroes and a young woman dressed as a fish tank.

They lend their voices along with thousands more in a resonating chorus of "Jonah, Jonah!"

As the giant former New Zealand rugby star ambles around the perimeter of the stadium, the final of the Wellington Sevens tournament is being fought out between the host team and South Africa.

But the game is almost won and the action on the field is momentarily forgotten as 30,000 spectators, bedecked in an array of outlandish and inventive fancy dress costumes, welcome back one of their own.

In their eyes there's no such thing as a former All Black. Once an All Black always an All Black. But there are All Blacks and then there's Jonah Lomu.

He became a global sporting phenomenon after his heroics at the 1995 World Cup, scoring four tries in a bulldozing semifinal performance against England that caught the attention of NFL talent scouts and made him a hero in his homeland.

As well as presenting February's edition of CNN's Rugby Sevens Worldwide, Lomu was also presenting the Wellington Cup to the winners of the tournament. It's one of the goals which eluded him as a player in a sevens career which encompassed victory at the Commonwealth Games, World Cup and Sevens World Series.

Born in Auckland, where he made his name as a rugby player, Lomu moved south to the capital for the final years of his domestic career before a kidney transplant halted his playing days -- though he would later recover health and continue with overseas clubs.

During the final moments of the game at the Westpac Stadium, he stands at the touchline bellowing advice: "Numbers boys. Numbers!"

His mind is on the pitch. The call of "numbers" means wherever you are on the pitch, you look up and count the opposition players from the outside in -- 1, 2, 3 -- to help you determine which player to line up to tackle.

In a fast-flowing game such as sevens, it's a simple way of ensuring the New Zealand defense is solid.

The swirling wind and rain which accompanied much of this tournament are far from unfamiliar to Wellingtonians. But the South Africans, who beat New Zealand in the previous final in Las Vegas, fail to cope with the conditions and a Kiwi side which has bounced back from a first-round defeat by Fiji.

When the All Blacks walk onto the pitch for their warmup, the crowd roars.

When they return to the dressing room it's as a human phalanx, each man's arms upon the shoulders of the man in front, the sublime leading the sublime in a display of togetherness behind their inspirational captain D.J. Forbes, whose shaved head gleams beneath the floodlights.

When the players run out onto the pitch for the game itself, the noise levels step up several more decibels.

And when the foghorn sounds for the end of the final game, it's the signal for cheering, dancing and fist-pumping as diverse groups of peacocks, cavemen and women, bunches of human bananas and assorted other fruit share the joy of victory.

The winners' podium is hastily assembled. Brooms are required to sweep water off the platform.

Lomu waits to hand out condolences to the South Africans, and then a great grin spreads across his face as he embraces Captain Forbes and hands him the cup.

The pyrotechnics which have become ubiquitous at sporting events of this nature backlight the celebrations, but as the New Zealand team descends the steps there's an extra treat for the crowd. The entire team whips off their shirts to unveil an abs-fest of the highest quality and unleash the traditional Maori war dance, the Haka.

Watching it unfold is a grinning Jonah Lomu. "Nice one boys!" he shouts before joining them in more hugs and handshakes.

Wellington could not have written a better script for the homecoming of its favorite adopted son.