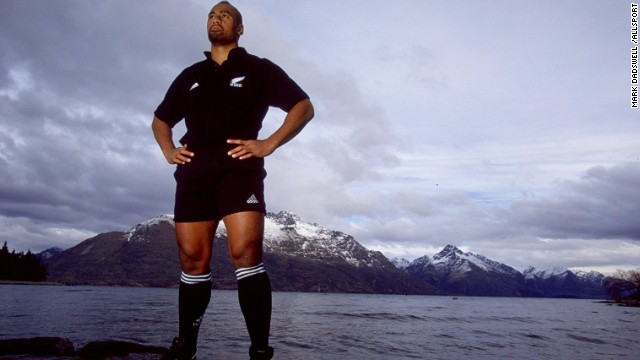 New Zealand's Jonah Lomu is arguably the best known rugby player of all time and one who has enjoyed the greatest stature in the game over the past two decades. 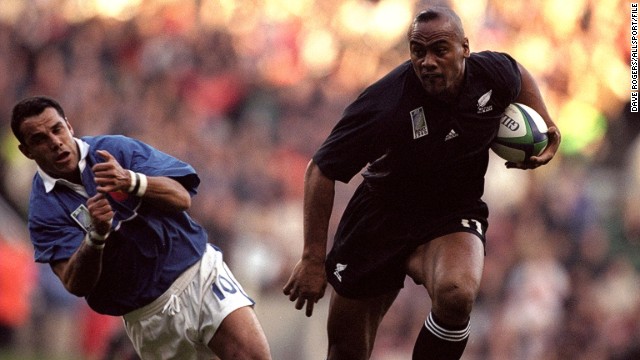 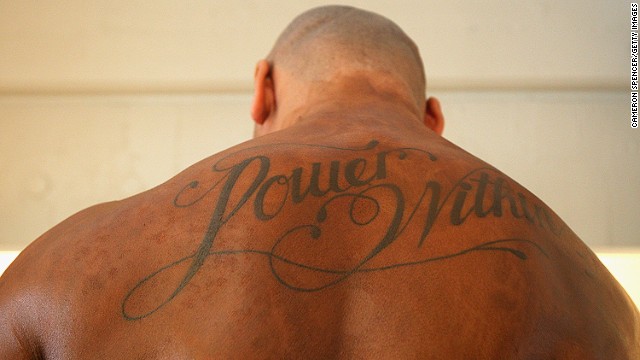 Lomu made his international debut in 1994. At 1.96 meters tall and weighing 260 lbs, the Kiwi was unlike any other winger who had played rugby before. Sadly, his career was cut short by a kidney disorder which required a transplant in 2004 and regular dialysis treatment. 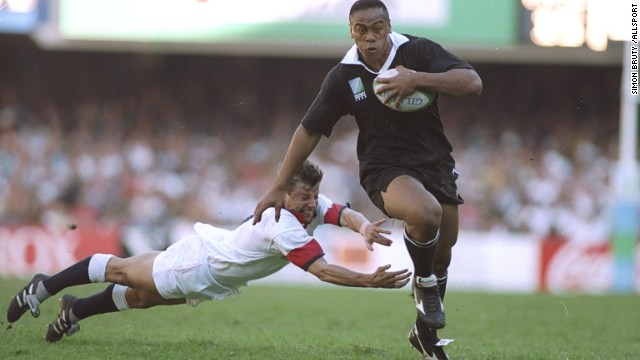 Lomu burst onto the scene at the 1995 World Cup, scoring four tries against England in the semifinals. Here, a desperate Rob Andrew fails in a last-ditch attempt to tackle the big man. 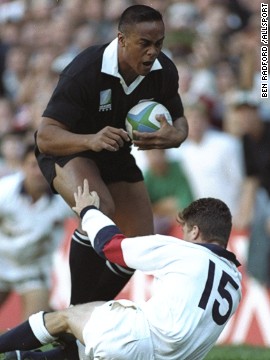 This picture of full-back Mike Catt being trampled over by Lomu summed up the helplessness of England's players in the face of the warrior All Black. New Zealand won the game 45-29 but lost to South Africa in the final. 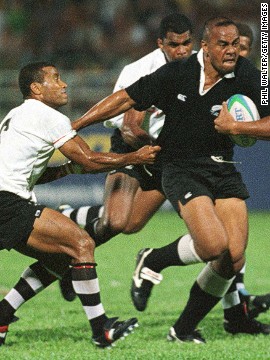 Lomu in action during the 1998 Commonwealth Games against Fiji, where not even the great Waisale Serevi (left) can stop him. New Zealand would go on to take the gold medal, and Lomu is a passionate advocate of sevens: "The greatest thing I love about it is the camaraderie that the players have among all the nations ... that come together to make this beautiful game." 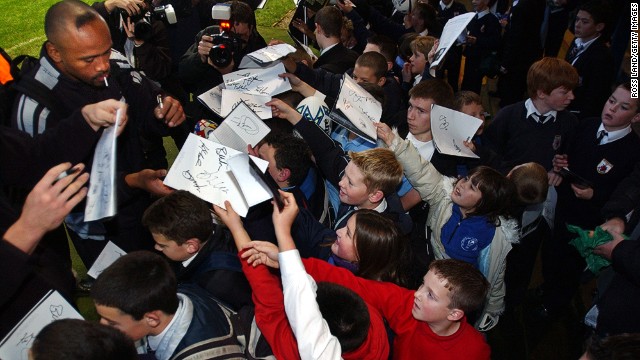 Lomu's fame spread far and wide, with his popularity transcending the sport. 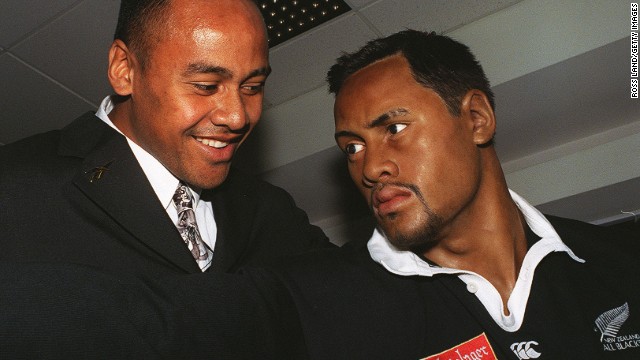 In 1997, Lomu was honored by Madame Tussauds in London, which created a life-size waxwork doll. 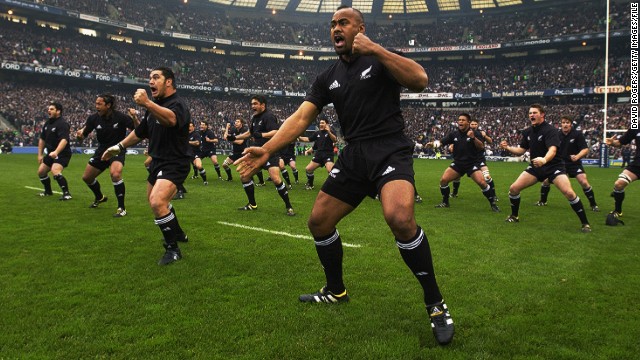 Lomu doing the haka with his New Zealand teammates at Twickenham in 2002. "When I chucked on my All Black shirt, for me, it was like armor, getting ready to go into battle," Lomu told CNN. 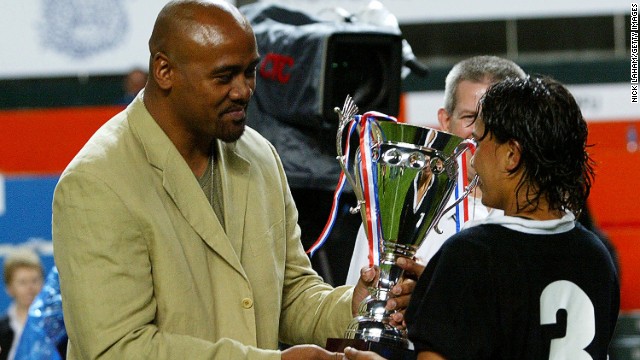 Lomu's last international match was in late 2002, but after his kidney transplant he played club rugby sporadically until 2010. Here Lomu presents Annie Brown of New Zealand with the Women's Rugby Sevens trophy during the 2004 Hong Kong Sevens. 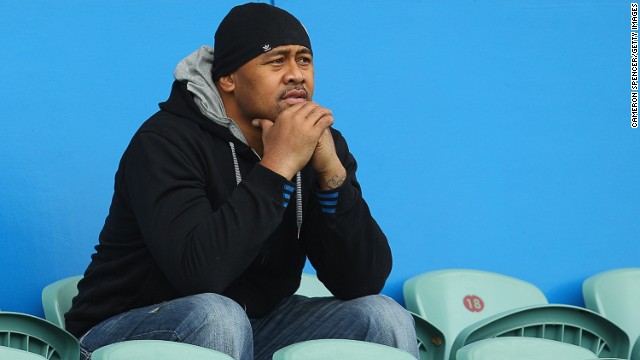 In an updated version of his autobiography published in 2013, Lomu revealed he was close to death after his kidney began to fail in 2011. His doctors said he was lucky to pull through and he is currently on the waiting list for a new transplant. 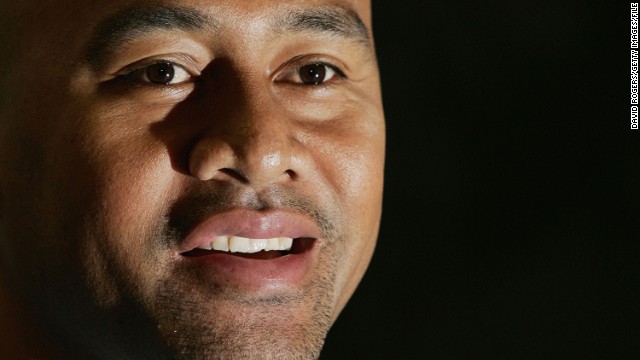 Despite his ongoing medical travails, Lomu retains a admirably positive outlook on life. It's all thanks to rugby, he says. "The reason why I think I can cope with my medical condition (is because of) the things I've learned through rugby and the desires and beliefs that I was given through playing the game."
HIDE CAPTION
Man mountain
Heavyweight star
Massive talent
Semifinal spectacular
Trampling over English pride
Sevens success
Rugby's first global star
Waxing physical
Readying for battle
Rugby ambassador
Battles off the pitch
Fighting spirit
<<
<

(CNN) -- Many have matched his size, some his speed, but no-one ever combined the two to such devastating effect on a rugby field as Jonah Lomu.

The former All Blacks winger became the sport's first global superstar when he burst onto the international scene at the 1995 Rugby World Cup and now, almost two decades on, his appeal shows no sign of slowing down.

In his capacity as ambassador for the recent HSBC Sevens World Series tournament in Wellington, Lomu was given a hero's welcome at the New Zealand capital's Westpac Stadium.

It's a reception he's got used to wherever he goes, but the cries are particularly heartfelt at a ground where he represented both the provincial side Wellington and the Hurricanes in Super 12 from 2000-2003.

"The greatest thing I love about sevens is the camaraderie that the players have among all the nations. But at the same time the fans make what sevens is all about," Lomu tells CNN's Rugby Sevens Worldwide show.

"It's exactly how the game should be played -- fair play but at the same time speed, skill, pace: everything that needs to be done," he adds.

"You see it in the crowd as well -- they need a bit of stamina (too) because it's two days of partying hard. There's a lot of celebrating going on but it's absolutely beautiful to be a player on the pitch or a former player in the stands watching your favorite team."

Lomu-graphy: Life and times of a rugby giant

Lomu's international career began at the Hong Kong Sevens in 1994 before gaining his first full cap against France later that year to become the youngest player (19 years, 45 days) to wear the prestigious All Blacks jersey since the start of that century.

"When I chucked on my All Black shirt, for me, it was like armor, getting ready to go into battle," he says. "When you get the opportunity to pull it on it is absolutely something special."

Lomu famously trampled all over England's pride (and Mike Catt's body) in the semifinals, running in four tries -- inducing insult then praise from Will Carling after the game.

"He's a freak and the sooner he goes away the better," the shell-shocked England captain said following his team's 45-29 defeat.

"He's very balanced, has that incredible power and anyone coming on to the ball like he did is almost impossible to stop. He's an amazing athlete."

Rugby's current fastest player, American Carlin Isles, who reportedly runs the 100 meters in 10.13 seconds, says speeding down the wing feels like flying. But from Lomu -- who has a best of 10.80 seconds over the same distance -- comes a more earthy assessment.

"I don't know what other people are thinking of when they're running down the sidelines, but all I think about is there is one destination that I need to get to and that's the try line," Lomu says.

"Whoever or whatever is in front of me, I either go around it or over it, or if not create something for my teammates."

From 1994-2002, Lomu ran in a total of 37 tries in 63 appearances for New Zealand in an international career interrupted and eventually prematurely curtailed by a life-threatening kidney condition.

The 38-year-old has suffered from nephrotic syndrome, a rare kidney disorder, since 1995. He nearly died in 2011 when a transplanted organ received in 2004 started to fail.

"My bloodstream was septic and the doctors were starting to think the worst: that my kidney had failed and my body was in total meltdown," Lomu, who on the waiting list for a new transplant, revealed last year.

He has been able to deal with his health problems by drawing on his experiences on the rugby field.

"The reason why I think I can cope with my medical condition (is because of) the things that I've learned through rugby -- the desires and beliefs that I was given through playing the game," Lomu says.

Lomu still requires regular dialysis but isn't one to complain, preferring to focus on the positives.

"Medically, I'm as good as I can be. Traveling around the world is always difficult because of the medical treatment that I need, but I've got a great wife (Nadene) who organizes it all. The family that I have gives me the will to get up in the morning ... especially my two boys (Brayley and Dhyreille) -- that's always a reason to get up."

Another incentive has been promoting sevens in Wellington and around the world as the the abbreviated version of rugby union gears up for its Olympic debut at Rio in 2016.

"When you're talking about the changing dimensions of the game, sevens is where it's at," he says.

"The nations that couldn't match the bigger nations at the 15-man game, they can definitely do this and get in there and compete with the best nations ... or even knock them over, as the Kenyan team has shown us."

This time around, the east Africans didn't fair so well, but still managed a notable win over Scotland, the sport's inventors back in 1883, in the final of the Bowl competition last month.

"The biggest thing for sevens is making sure it grows in the way it should grow and people keep enjoying it," Lomu says.

"But the beauty is that it can only get better.

"When you've got 142 countries playing the game, that's awesome to see. And this is the next level."