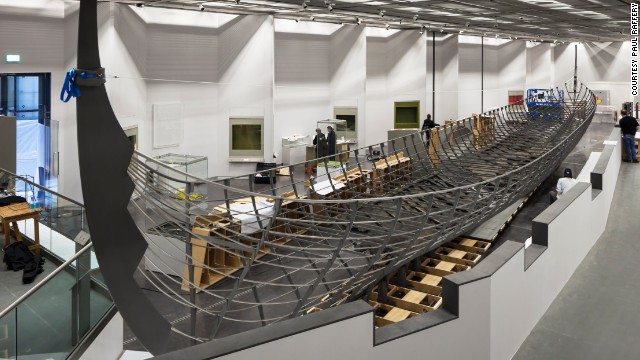 At 37 meters long, the Roskilde 6 is the biggest Viking ship ever discovered. It is on display at the British Museum in London. 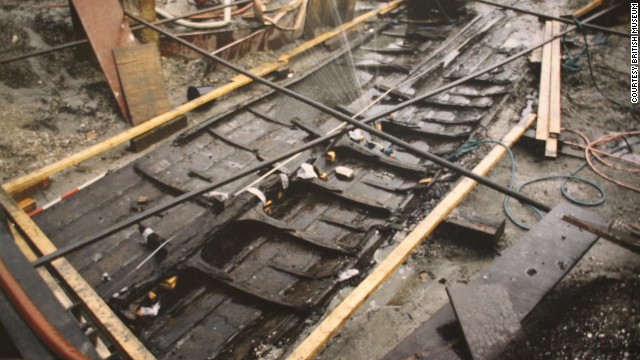 Dating back to 1025, the historic vessel was found in Denmark's Roskilde Fjord during excavation around the city's Viking Museum. 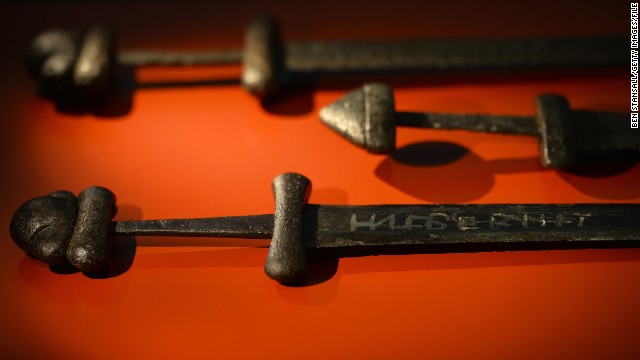 The London exhibition features hundreds of ancient artifacts, including these hefty swords found in Russia which date back to around 1000 AD. 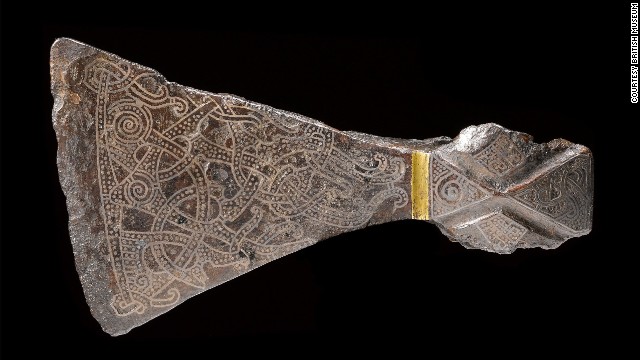 "We have this idea in our heads of invincible warriors -- they always won, they always died in battle, they never gave in, they never surrendered. But that wasn't quite the case," says exhibition curator Thomas Williams. 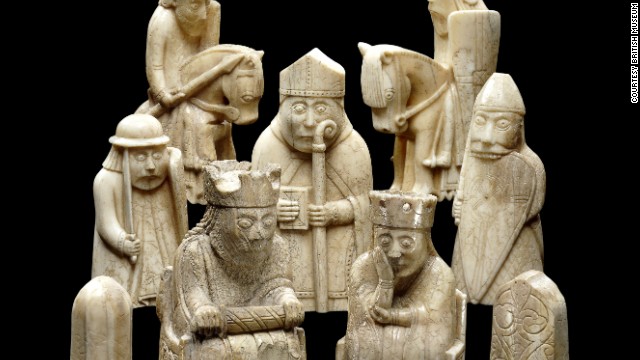 These delicate chess pieces give an insight into a more thoughtful Viking, rather than the stereotypical image of barbaric warrior. 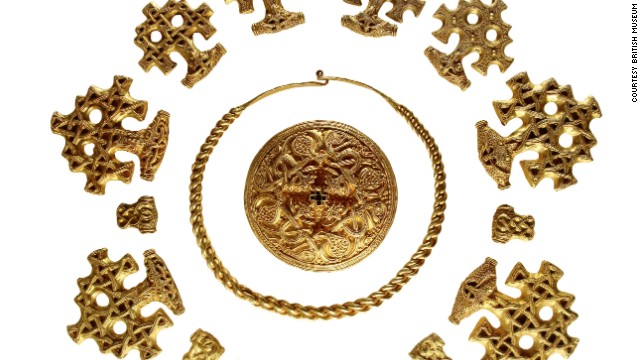 Vikings also enjoyed the finer things in life -- like ostentatious jewelery. These elegant decorative pieces were probably made in Denmark in the late 10th century. 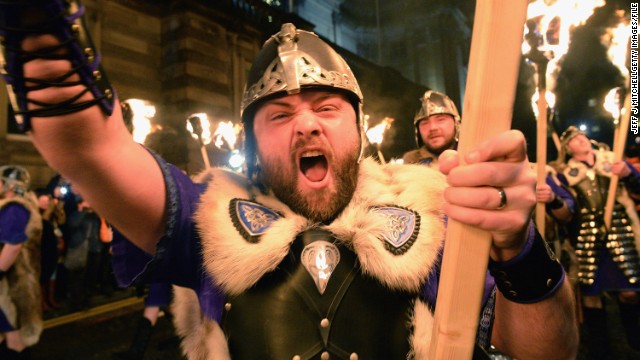 Were the Vikings really as brutish as we imagine? "It was a very male culture of drinking and gaming," says Williams. "We've got dice, a horn, a bucket used for serving beer, and serving platters -- very much a culture centered around feasting and male bonding." 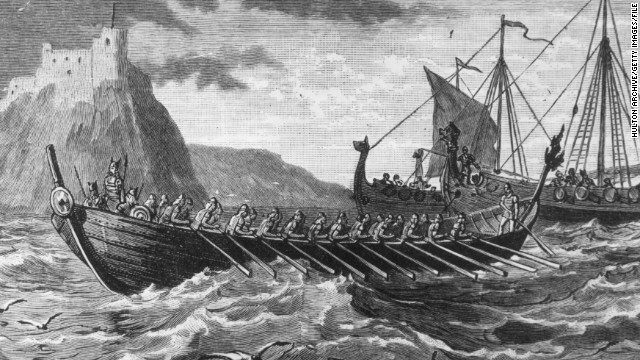 "What defines the Viking period is the superiority of naval technology, coupled with this strange desire to explore the world and do sometimes appalling, but sometimes quite amazing things," says Williams. 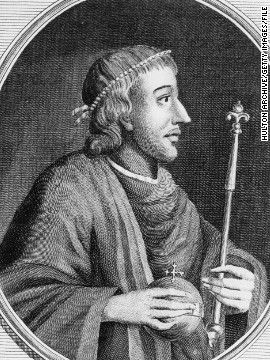 Did Roskilde 6 belong to King Cnut the Great? Historians seem to think so. Given the huge size of the vessel, it was likely used as a royal warship.
HIDE CAPTION
Roskilde 6
Discovery
Live by the sword
Awesome axe
War games
Golden age
Myth and legend
Martime masters
King Cnut's pride and joy?
<<
<

(CNN) -- There are ghosts at the British Museum.

Hulking, hairy, bloodthirsty warriors grunting in unison as they row the biggest warship of its kind the world has ever known.

Can the gallery curator see them, or am I the only one? He laughs -- a little nervously: "Yes, you do get a sense of them."

Looming before us is Roskilde 6, the largest Viking ship ever discovered, carefully reconstructed after 1,000 years languishing beneath the waves. At 37 meters long it's double the size of the boat Christopher Columbus sailed to America.

Ghost armies or not, it is a sight to behold. The ship's fearsome metal frame seemingly rises from a watery netherworld on a mission to conquer the globe -- once and for all. 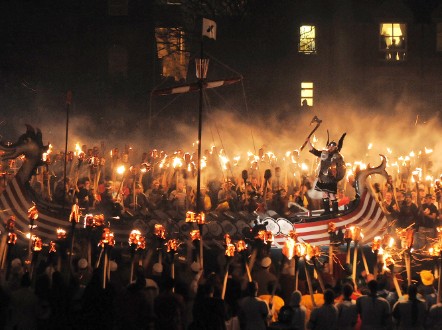 Built around 1025, it is the crown jewel in the museum's major new exhibition exploring the Viking age, and it sails on an invisible wave past glass cases of ancient jewels, swords and skeletons.

"It's huge. And you can't stress that enough. Even by the standards of written descriptions of big Viking ships, this is massive," says curator Thomas Williams -- who, with his thick beard and carefully twirled mustache, resembles something of the modern-day Norseman.

Even by the standards of written descriptions of big Viking ships, this is massive
Thomas Williams, curator

If you saw this vessel on the horizon -- with its elaborate carvings, animal head prow, and single sail billowing in the wind -- it would have signaled serious trouble was on the way.

"To see this coming up the River Thames would have meant domination by a political elite," says Williams. "It would have struck terror into people.

"I suppose in many ways it's psychological warfare as much as anything else. You're demonstrating your power through the sheer scale and awesomeness of this ship. And of course we've got this one, but we don't know how many there might have been. Dozens, hundreds of ships ... it's frightening stuff."

It's perhaps fitting that the boat was discovered in Denmark's Roskilde Fjord by workers renovating the city's Viking Museum in 1997.

Almost a quarter of the original timber remained, and it now lines the heart of the recreated metal structure on display in London. 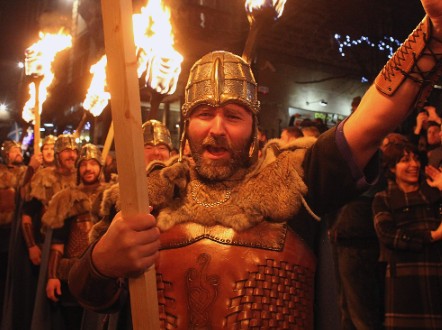 Only a person of enormous wealth and power could have built a boat like this, with historians pointing to North Sea ruler at the time, Cnut the Great, a man described as: "Exceptionally tall and strong, and the handsomest of men, except for his nose."

Long and sleek (the boat, not Cnut's nose), it was designed for speed, featuring low sides so men could leap quickly onto land.

"This is really a troop carrier," says Williams. "An amphibious landing craft to get lots of men across the sea as fast as possible."

You're demonstrating your power through the sheer scale and awesomeness of this ship
Thomas Williams, curator

But who were the Vikings, really?

"The way the Vikings are traditionally presented, in Britain at least, is as marauders, as these terrible people who come from overseas, kill all the monks, steal your stuff, steal your wife, and off they go again," Williams says.

"But from a Scandinavian perspective it's a much more varied picture. Those people who disappear over the horizon to raid a monastery don't reflect the whole of Scandinavian society in that moment -- that's just what we see from the accounts of monks writing during the Viking age."

That said, being seen as a warrior was a key part of being a Viking man.

Much like a Hell's Angel biker might adorn himself in tattoos to intimidate others, a Viking might file down his teeth into a horrific snarl -- as one skull on display demonstrated. 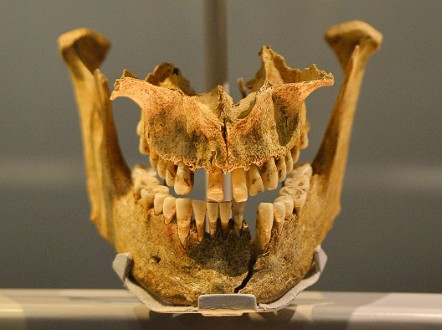 It would have been excruciatingly painful to file down these teeth.
Getty Images

"But it's also saying, 'I am marking myself out as somebody who is beyond the social norm.' And people who identified as being full-time Vikings were not the norm."

But of course the Vikings were not simply beefed-up bruisers. They were superior seafarers; the first people to reach four continents, arriving in America long before Christopher Columbus.

"All of these things are quite inspiring. They still capture our imaginations today."