The long goodbye: Why funerals are big deals in Ghana

(CNN) -- Funerals in Ghana are not only an occasion to mourn. They are also an opportunity to celebrate the life of the dearly departed.

Hardly ever a somber, low-key affair, Ghanaian funerals are a social event attended by a large number of mourners, which could reach hundreds -- the more, the better.

"That means the person was very friendly, very charitable, was good to socialize, was having a good communication with the people within the society," says Jamima, a family friend who attends the funeral of the 70-year-old Joanna Boafo in the town of Kumasi.

Ghanaians may spend as much money on funerals as on weddings, sometimes even more.

I think if she is anywhere, if my mother is anywhere right now, she will be very happy
Richard Boafo

That includes the obligatory giant, colorful billboards that announce funeral arrangements. The billboards, which may cost from nearly $600 to $3,000, are placed at strategic spots for everybody to see, often dotting the cities' skylines.

Most funerals are held on the weekends, most frequently on Saturdays. Mourners, usually dressed in black or black and red traditional funeral clothing, may travel to other towns or villages, and in turn they expect the bereaved families to provide food, drinks, music and dance.

The extravagance also extends to the caskets. 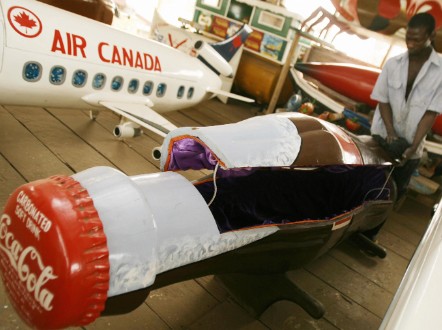 A Ghanaian worker crafts a coffin that looks like a bottle of cola.

Coffins have become a statement in Ghana. They are usually brightly colored and elaborate. They may have fanciful shapes that resemble the dead's favorite objects, or represent their profession.

Thus, a carpenter may have a coffin shaped like a hammer, or a shoe for a shoemaker. There are also caskets shaped like Coca-Cola bottles and airplanes.

Ghanaians revere the dead so much that funerals are at the heart of Ghanaians' social life.

Lavish spending on funerals has invited criticism from political and religious leaders.

"We are investing in the dead rather than the living ... and that is bad," legislator Alban Bagbin once said. 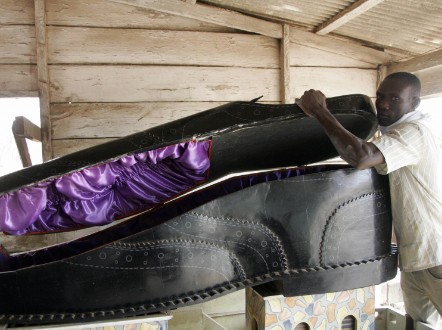 ''Kicking the bucket' with a nice brogue.

Funeral rites also involve some official crying by mourners, as well as praying. The Boafos, like many grieving Ghanaian families, hold a church service for Joanna as well.

But the rest of the funeral ritual is purely party time.

"I think she would be very happy," says Richard, son of Joanna, as mourners are dancing and having a good time. "I think if she is anywhere, if my mother is anywhere right now, she will be very happy."

Yenni Kwok contributed to this report.