Why punk icon Vivienne Westwood shaved her head (hint: it's not for fashion) 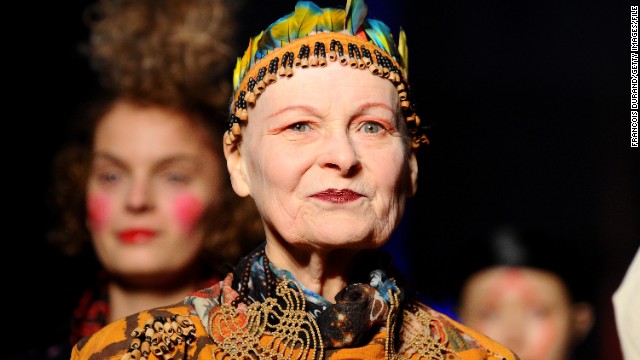 British fashion designer Vivienne Westwood has shaved off her trademark fiery red hair -- not for style, but to draw attention to climate change. 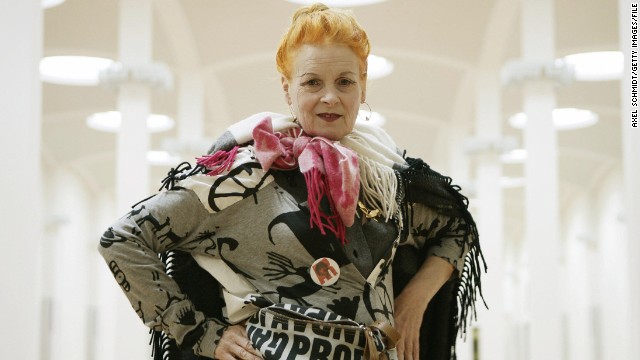 The 72-year-old 'grandmother of punk fashion' said she also wants to scale back her clothing business, due to concerns over environmental sustainability. 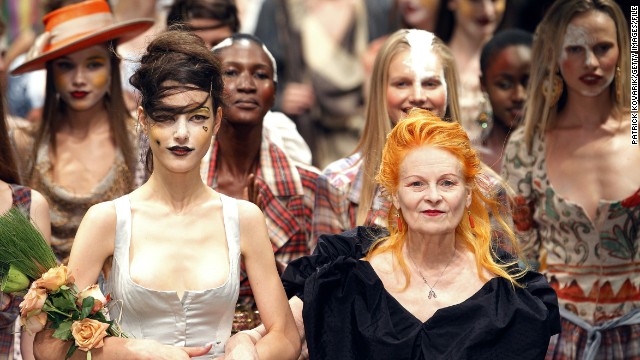 "I've got too much product," she said at London's annual Women of the World Festival. "I'm trying to completely reduce the scale of operation. I'm concentrating on quality, not quantity." 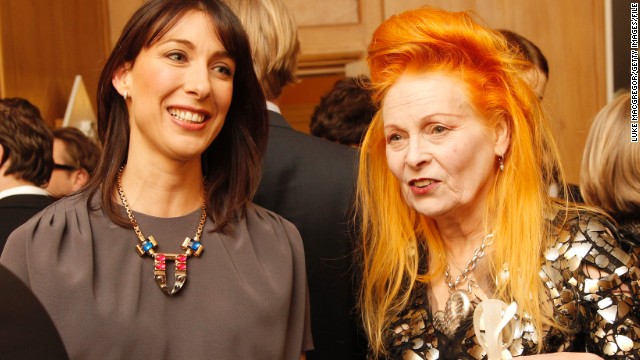 Since helping to forge Britain's punk look in the 1970s, Westwood has become one of the country's most prestigious designers, pictured here with the country's first lady, Samantha Cameron. 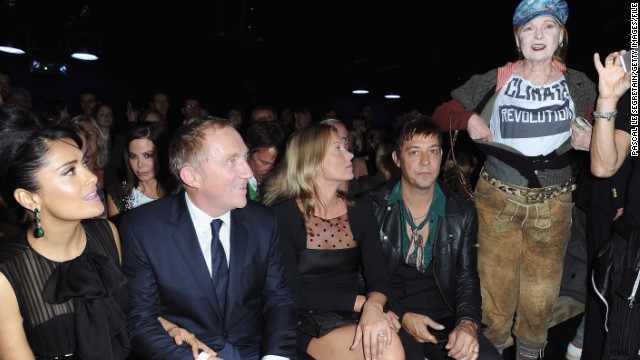 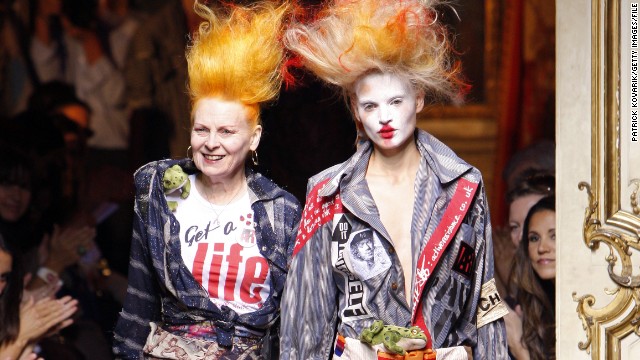 In a career spanning four decades, Westwood has become one of the UK's most distinguished designers, receiving an Order of the British Empire from Queen Elizabeth II in 1992. She caused a stir at the time, twirling for photographers without wearing underwear beneath her skirt. 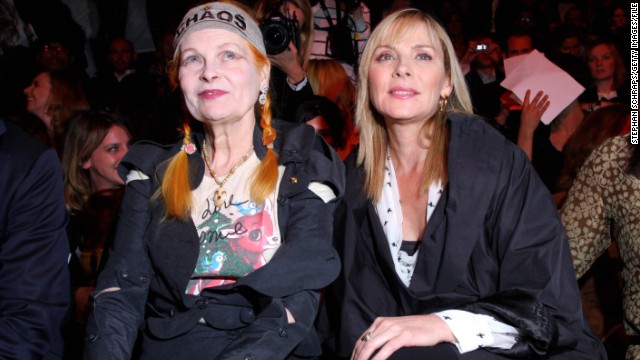 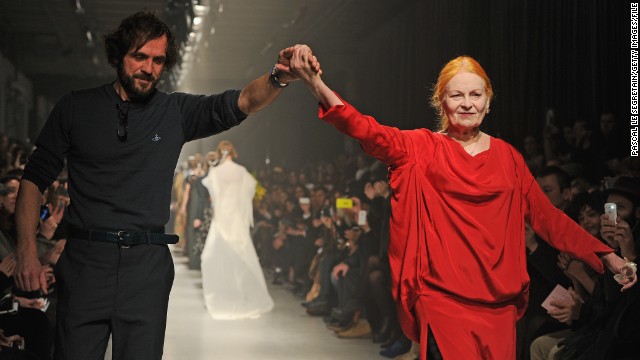 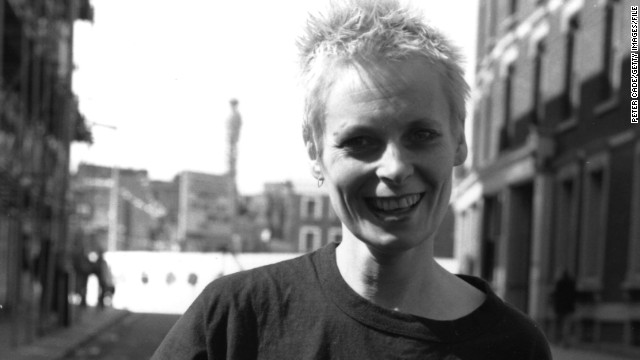 "I think it's not good to just go to a supermarket and come back with bags and bags of cheap t-shirts," said Westwood, pictured here in 1977. "All this consumption is not a real choice."
HIDE CAPTION
Eco warrior?
Westwood's world
Quality vs quantity
Political points
Front row seats
Hair raiser
Star power
Fashion forward
Punk rock
Rebel with a cause
<<
<

(CNN) -- Vivienne Westwood is as bald as a baby, the faintest hint of downy white hair sprouting across her naked scalp.

Straining forward in her chair, the 72-year-old "grandmother of punk fashion" appears both vulnerable and fierce. Fragile and yet fearless.

"The world was so mismanaged and we hated the older generation because they weren't doing anything about it," she says about forging Britain's punk aesthetic with then-boyfriend and Sex Pistols manager Malcolm McLaren in the 1970s.

"I don't hate the older people now -- I'm one of them. But I've been trying to do something to change things all my life."

'God Save the Queen'

Decades after the couple started their radical new clothes shop in an area of London called "World's End" -- displaying ripped t-shirts, rubber curtains, and even a live rat in a cage -- Westwood has become one of Britain's most prestigious fashion designers.

This is the woman who, after receiving an award from Queen Elizabeth II in 1992, famously twirled around for photographers -- without wearing any underwear under her skirt.

The provocative lady is still there, though a little more frail-looking these days, speaking at London's annual Women of the World Festival.

"Buy less, choose well, make it last," she tells a crowd of hundreds -- mostly women -- patiently listening to a lecture that meanders into climate change, banks, and social responsibility.

Westwood appears almost reluctant to talk about the "superficial" fashion industry she has conquered in a career spanning four decades.

"We face mass extinction," she says. "It's being hidden from us because our rulers still pursue their own vested interest, they've been trained to think that the people do not understand what's good for them."

Her trademark head of fiery red hair has been shaved off, not for style -- but to draw attention to climate change.

Westwood says she now plans to downsize her hugely successful clothing empire, in a bid to promote environmental sustainability.

"I've got too much product," she says. "I'm trying to completely reduce the scale of operation. I'm concentrating on quality, not quantity."

What about those people who can't afford her designer clothes?

"It is difficult for people. But I think it's not good to just go to a supermarket and come back with bags and bags of cheap t-shirts."

"All this consumption is not a real choice."

Born in Derbyshire, in north west England, during World War Two, Westwood's mother was a weaver in a cotton mill, while her father came from a family of shoemakers.

As a teenager in the 1950s, she would alter her school uniform into fashionable pencil skirts. Later, she worked as a teacher.

But it was through meeting Sex Pistols manager Malcolm McLaren in the 1960s -- who became the father of her son Joseph Ferdinand Corré in 1966 -- that she really embraced punk rock.

The couple's south west London shop -- which at various times was named "Let it Rock," "Sex," and "Seditionaries - Clothes for Heroes" -- sold everything from rubber fetish gear to pirate outfits. 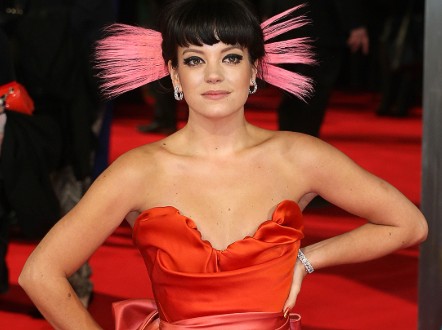 "The country was a morass of beige and cream Bri-Nylon and their shop was an oasis," said Marco Pirroni of band Adam and the Ants.

"It took great liberalism and bravery to wear rubber in the street. If you shopped there, you didn't go anywhere else."

Cast your eye across the most glamorous red carpet events in the world today and you'll likely to see a Westwood design -- be it Lily Allen's princess dress at the BAFTAs or Pharrell Williams' cowboy hat at the Oscars.

Regardless of her huge success, Westwood still talks of fighting the establishment. "I used my fashion as a platform to talk politics," she says.

"When you're a fashion designer you sort of design in a capsule. This is how you want people to be, like they are at the moment, but better."