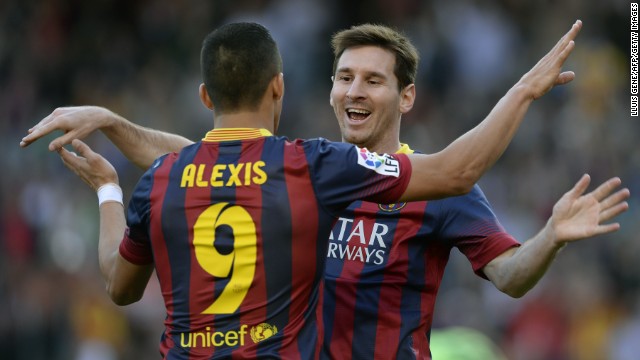 Lionel Messi and Alexis Sanchez were both on target in Barcelona's win over Osasuna.
STORY HIGHLIGHTS

(CNN) -- Perhaps the most frightening statistic attached to Lionel Messi is the fact that he's only 26.

Another day, another record broken.

It is the sixth consecutive season in which he has scored 30 goals -- not bad for a man who has been accused of not reaching the exorbitant levels which he has set in years past.

His 25th hat-trick for Barcelona ensured his side moved to win four points of league leader Real Madrid ahead of "El Clasico" next weekend.

Osasuna simply had no answer to Barcelona's attacking prowess as the home side thrashed its lowly opponent.

Alexis Sanchez, Andres Iniesta, Cristian Tello and Pedro were all on target at Camp Nou.

Messi's first hat-trick since the Champions League win over Ajax in September 2013 could scarcely have come at a better time for Barca.

"I think we can beat Real Madrid in the Bernabeu and that would put us right in the fight for La Liga," Sanchez told Canal Plus.

"Both teams will see themselves as favorites, they are the two biggest clubs in the world and it will be a great game. We are going to the Bernabeu with only the intention of winning."

Meanwhile, in Italy, AC Milan fell to a third consecutive league defeat which all but ends its chances of qualifying for European competition next season.

Milan, 12th, was beaten 4-2 by Parma with Antonio Cassano scoring twice on a painful afternoon for the Rossoneri.

The game couldn't have started much worse for Milan, which lost goalkeeper Christian Abbiati inside the opening nine minutes.

Abbiati was adjudged to have brought down Ezequiel Schelotto and was promptly dismissed before Cassano slotted away the penalty.

Cassano added a second after the interval but Milan rallied and Adil Rami headed home Kaka's corner to give the home side hope.

And when Mario Balotelli equalized with 14 minutes remaining from the penalty spot, the comeback looked on for Clarence Seedorf's side.

Jonathan Biabiany's diving header in the fifth minute of stoppage time sealed the win and condemned Milan to yet more misery.

Milan, which was dumped out of the Champions League by Atletico Madrid last week, is now 11 points behind Parma, which sits in the first Europa League spot.

Genoa gave the league leader a fierce fight before going down 1-0 -- a result which leaves Juventus 17 points clear at the top of Serie A.

In France, Monaco kept up the pressure on league leader Paris Saint-Germain with a 3-2 win at Lyon.

Valere Germain, James Rodriguez and Dimitar Berbatov got the goals for Monaco, which sits second in the table.

Jimmy Briand scored twice for Lyon which finishes the weekend in fifth place.

PSG gained a 2-0 win over Saint Etienne in the day's late game courtesy of two goals from Zlatan Ibrahimovic.

In the day's early game, Montpellier drew 1-1 with Bordeaux.