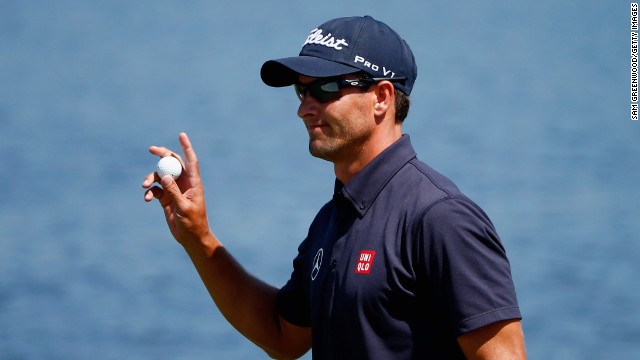 Masters champion Adam Scott tied the course record with an opening round of 62.
STORY HIGHLIGHTS

Well, on this occasion it was the sick golfer who came out on top on the opening day of the Arnold Palmer Invitational at Bay Hill, Orlando.

Adam Scott, who had been suffering with flu-like symptoms, tied the course record Thursday after carding a 10-under 62 to move into a three-shot lead.

"It takes your mind off (golf)," Scott told reporters after being asked about feeling under the weather.

"The expectations lower, slows you down and almost takes your mind off what's going on, because you're not even feeling human sometimes.

"I went out there today just trying to get the ball around. (I feel) pretty ordinary."

Scott, the reigning Masters champion, may have felt ordinary but his golf was anything but as he produced a magical first round.

The Australian hit two eagles and seven birdies on his first appearance at the tournament since missing the cut in 2009.

"It's maybe a little surprising," added Scott after being asked about his impressive start.

"I don't know where it came from, but the putter certainly got hot today.

"But I like the changes they've made since the times I have not been here. And today was just one of those days where the hole was a bit like a bucket."

Japan's Ryo Ishikawa and American John Merrick share second place after both finishing with rounds of 65.

World No.1 Tiger Woods is absent from the tournament he has won for the past two years with a back problem.