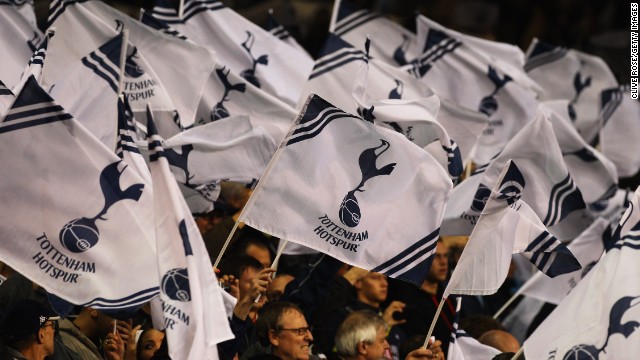 Tottenham has a large contingent of Jewish supporters.
STORY HIGHLIGHTS

(CNN) -- The ugly specter of anti-Semitism in football has raised its face again after a man was arrested at an English Premier League game.

Police confirmed that a 57-year-old man was arrested and charged on "suspicion of a racially aggravated offense" at Sunday's match between Tottenham Hotspur and Southampton.

Tottenham's fanbase has a large Jewish contingent, and they originally called themselves "Yid Army" in response to anti-Semitic abuse from rival supporters, but the offense did not relate to the "Y-word."

The club has often experienced abuse by its London rivals but this incident was unusual given the lack of animosity between Tottenham and Southampton.

The latest incident involved anti-Semitic abuse and the man, who was sitting in the visitors' section at Tottenham's White Hart Lane, was reported by two Southampton supporters to police.

A statement from the London Metropolitan Police read: "During the Tottenham vs. Southampton match at White Hart Lane on March 23, officers in the stadium received a complaint regarding the behavior of a man sat in an area reserved for away supporters.

"The complaint was made by two people sat in the same area of the stadium.

"Officers arrested the man, aged 57, on suspicion of a racially aggravated offense under section five of the Public Order Act.

"He was taken into custody and subsequently bailed until May 19, pending further investigation."

Tottenham regards itself as being proactive in its fight against racism and told CNN in a statement that "anti-Semitism in any form is wholly unacceptable and we support all efforts to kick it out of the game."

Last year the English Football Association had warned football fans that they would face criminal prosecution if they continued to chant the Y-word, which has been deemed anti-Semitic even as a segment of Tottenham fans claim they're using the word in defiance of anti-Semitism.

Earlier this month, charges were dropped against three Spurs fans who were accused of using the word "yid" while at a Tottenham game.

The Community Security Trust, which monitors incidents of anti-Semitism in the United Kingdom, has been outspoken in its fight against the problem.

"In recent years anti-Semitism in football has been an increasingly important issue," a spokesman told CNN.

"CST and other Jewish organizations have worked closely with the FA and Kick it Out to try and deal with the problem and we will keep doing so.

"Racism should have no place in football and that includes anti-Semitism."

A spokesman for Southampton told CNN: "As the Metropolitan Police have confirmed, this is an ongoing investigation and as such we are unable to comment at this time."

The incident comes weeks after former West Bromwich Albion striker Nicolas Anelka was fined £80,000 ($130,000) by the English Football Association after making the "quenelle" gesture during a match in December.

Anelka, who has since left the club, was widely criticized for the gesture -- -- which involves pointing a straightened arm downwards while touching the shoulder of that arm with the other hand -- after scoring against West Ham.

The gesture, which he said was dedicated to his comedian friend Dieudonne M'Bala M'Bala -- who uses it as part of his act -- is believed by some to be a Nazi salute in reverse and has been linked with anti-Semitism in Anelka's homeland, France.

Both charges were proved, said the commission, but it added it did not believe Anelka to be anti-Semitic.

Read: Home of football at odds over tackling racist abuse