Part of complete coverage on
CNN Labs
SHARE THIS 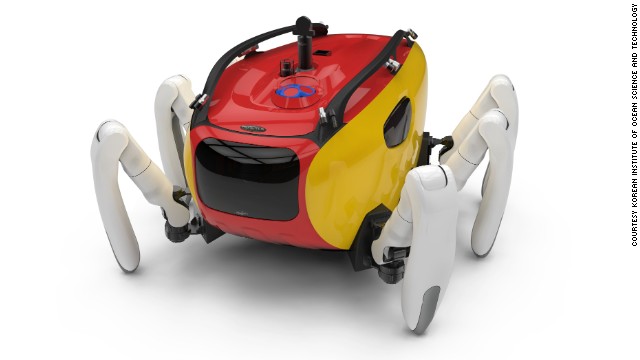 The Crabster CR200 is an underwater exploration vehicle developed by the Korean Institute of Ocean Science and Technology. 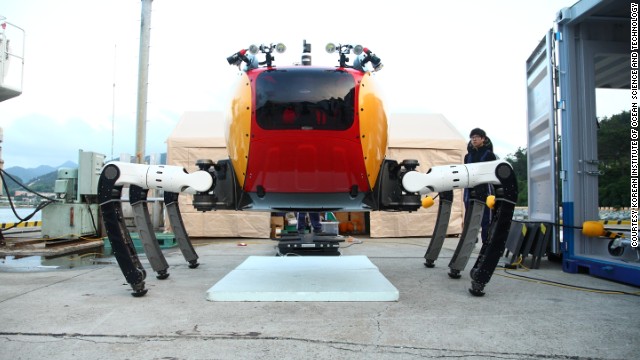 It weighs more than half a ton, and moves along the sea floor at a leisurely 10 cm/second. 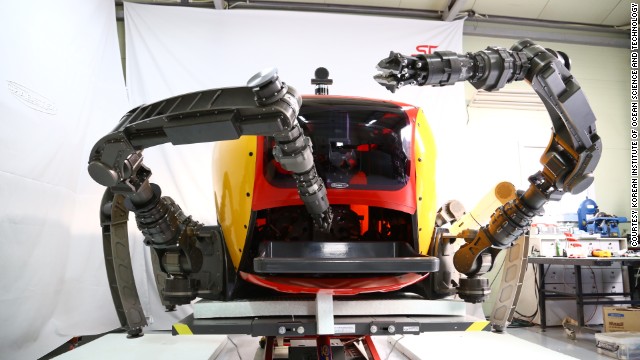 The Crabster's multi-jointed, six-axis front legs allow it to manipulate objects, and store them in the front compartment. 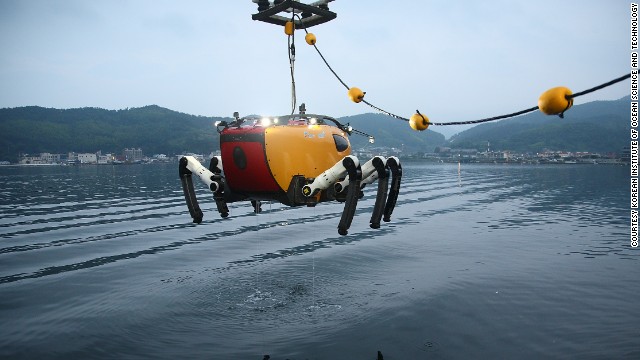 Its maiden voyage will come in May 2014, in the Yellow Sea. "The mission will be excavation of ancient artifacts by cooperating with marine archaeologists," said lead researcher Bong Huan Jun. "CR200 will do precise seafloor mapping of the turbid area with acoustic equipment. We will also try a number of possibilities of CR200's role for underwater excavation." 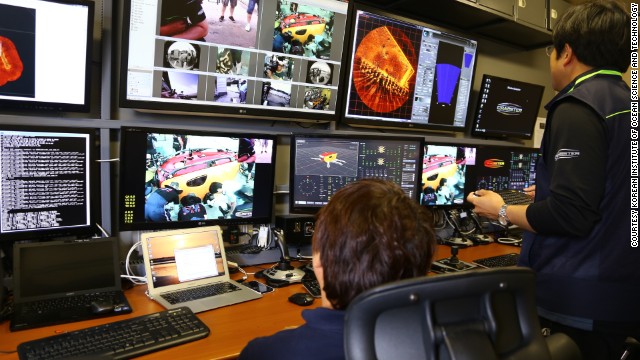 It is deployed using a tether and controlled remotely. 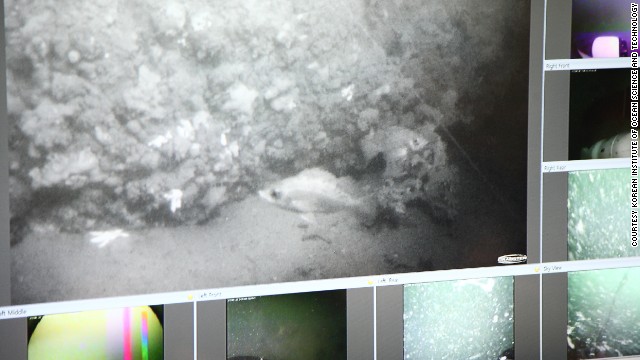 It navigates using video cameras, but also has sonar capabilities for murky waters. 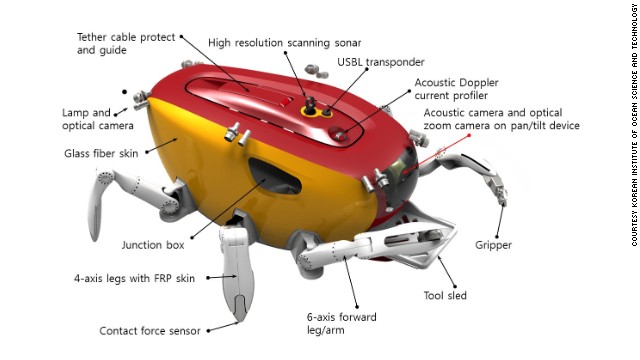 It underwent its first underwater tests in June 2013 in Geoje, South Korea. 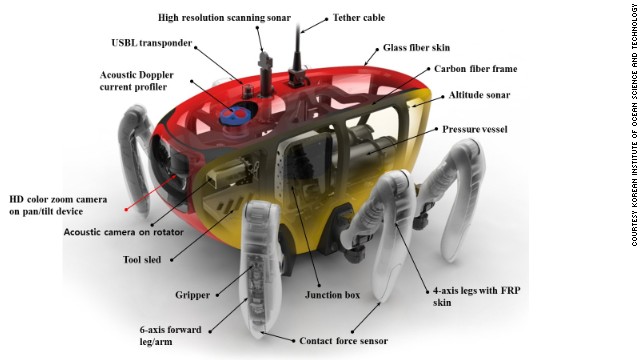 CNN Labs explores the latest innovations around the world to showcase cutting-edge designs and groundbreaking research in science and technology.

(CNN) -- Monsters of the deep will have a man-made horror to contend with, as the Crabster CR200 is released into the oceans. Weighing over half a ton, the six-legged, crustacean-inspired robot is intended for the most dangerous undersea exploration.

Developed by the Korean Institute of Ocean Science and Technology (KIOST), the Crabster offers a solution to a longstanding problem. While propeller-driven craft do not work well in fierce tides, and divers are limited to calm, relatively shallow seas, the new machine mimics the design of crabs and lobsters that live in stormy waters but are still able to control their movements.

The Crabster is 2.4m long, 2.4m wide and 1.3m tall -- rising to 1.8m when it stands up. Including payload it weighs around 650 kg, and its six legs contain 30 motors, giving the remote pilot ample control and dexterity. As the Crabster creeps along the ocean floor, it can adapt its posture to different current or pressure conditions, to a depth of around 200 meters. Using sonar, it scans the landscape for objects of interest, and can relay images through onboard cameras.

CR200 will help divers or work instead of them in harsh environments. It also could assist in locating underwater resources.
Bong Huan Jun, Korean Institute of Ocean Science and Technology

Crabster is undergoing final tests in "aggressive waters" ahead of its first mission. In May, it will be hunting for ancient artifacts in the Yellow Sea, where existing crafts have failed.

Read this: The guns that know who's firing them

"We are performing tests nearly every day," Huan Jun told CNN. "We upgrade Crabster software for more stable and fast walking and manipulation."

The researcher says the robot's speed of just 10 cm/second is one of the main challenges his team face, along with enhancing the vehicle's stability in strong currents and on rough terrain. The underwater vision system is another priority. But should Crabster succeed in its maiden voyage, Huan Jun predicts a widespread impact.

"We suppose CR200 can conduct seabed mapping, survey and inspection of wrecks, pipelines, ecosystems and pollution down to a 200-meter depth. CR200 will help divers or work instead of them in harsh environments. It also could assist in locating underwater resources, carrying out underwater mining, and responding to oil spill incidents."

Huan Jun hopes his creation will be manufactured for use across the world, and is already looking ahead to future incarnations inspired by nature. "We are now studying to make the Crabster to swim like turtles or diving beetles. And we are also considering the hydraulic Crabster for heavy-duty underwater working."

And are the researchers expecting their machine to be accepted in the marine environment? "I don't know if the animals treat the Crabster as a real crab or not," says Huan Jun. "I thought fish like it more than the other underwater vehicles with propellers that make noise. I hope animals treat Crabster friendly."

As of its introduction this year, any swimmers that come into contact with the robot may hope for the same treatment.

Biometric technology is being used to create guns that identify a user from their fingerprints and from their grip.
Web creator: We need net freedom
updated 4:18 PM EDT, Fri March 14, 2014

As the World Wide Web turns 25, its creator talks about spying, censorship and freedom.
What the Internet really looks like

Cassiopeia A was a star more than eight times the mass of our sun before it exploded in the cataclysmic, fiery death astronomers call a supernova.
Fusion milestone
updated 10:50 AM EST, Thu February 13, 2014

Robots that behave like termites could be useful for construction projects that would be too dangerous for humans.
Your DNA can reconstruct history
updated 2:02 PM EST, Thu February 13, 2014

Researchers used DNA to track historical mixings of populations during more than 4,000 years in a new study.
Drones for dogfights
updated 11:58 AM EST, Fri January 24, 2014

A lively community of startups, hobbyists and photographers have embraced DIY drone technology.
Unifying theory of everything?
updated 9:26 AM EST, Tue November 5, 2013

In recent years we've discovered some of the strangest things on the Red Planet like ice spiders and spiral-shaped lava tubes.
How Google aims to 'solve death'
updated 6:47 AM EDT, Thu October 3, 2013

It is an age-old question: will humankind ever defeat old age?