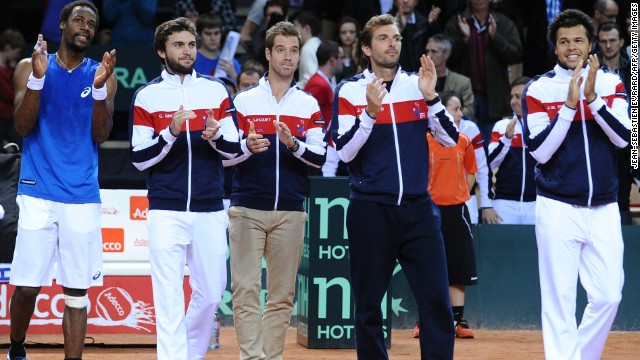 With Gael Monfils, far left, Gilles Simon, second from left, Richard Gasquet, third from left, and Jo-Wilfried Tsonga, far right, coming through the ranks at about the same time, there were high hopes for the so-called "New Musketeers" of French tennis. 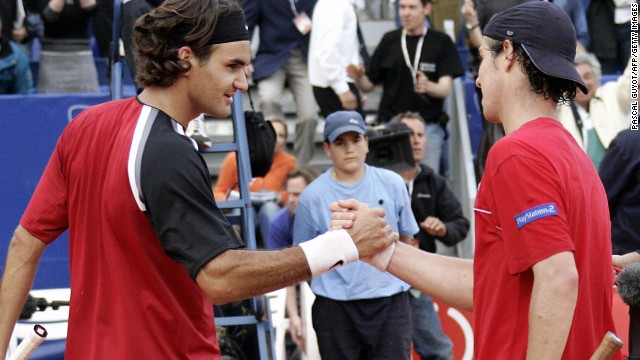 Those expectations were raised when an 18-year-old Gasquet saved three match points to beat Roger Federer, left, at the Monte Carlo Masters in 2005. 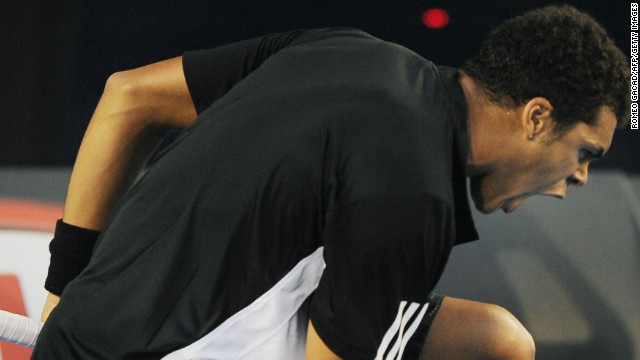 They were further raised when Tsonga reached the Australian Open final in 2008, upsetting Andy Murray and Rafael Nadal along the way. He led Djokovic by a set in the final before the Serb rallied to claim his maiden grand slam title. 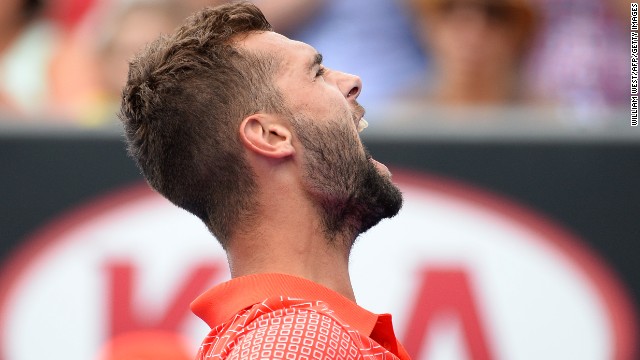 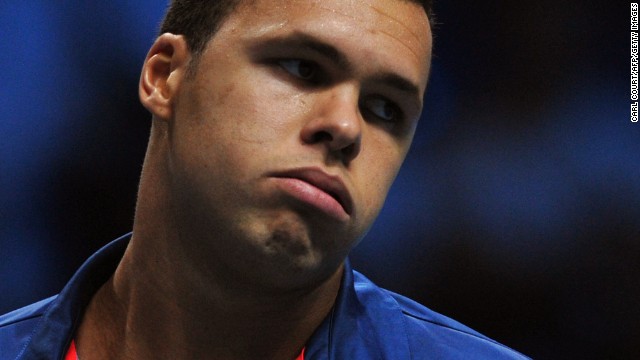 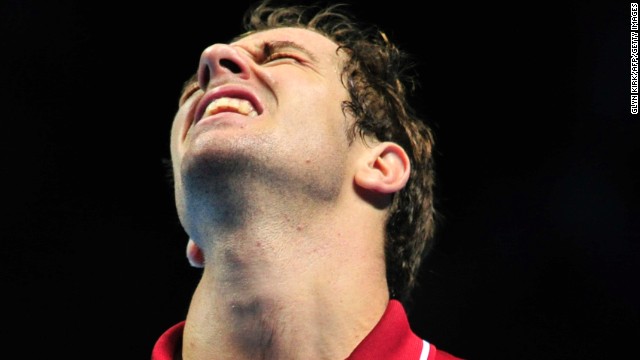 Gasquet, who was on the cover of a French tennis magazine when he was an adolescent, qualified for the prestigious year-end championships in 2007 but then missed out until 2013. He also served a drug suspension in 2009, although the ban was later overturned. 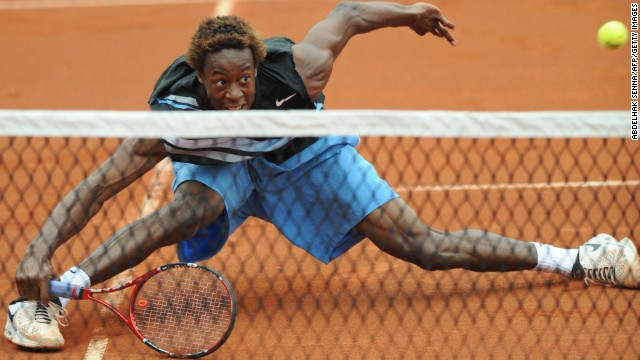 Murray described Monfils as probably tennis' best ever athlete but the elastic 27-year-old has made it to only one grand slam semifinal and rarely sparkles at big tournaments outside France. 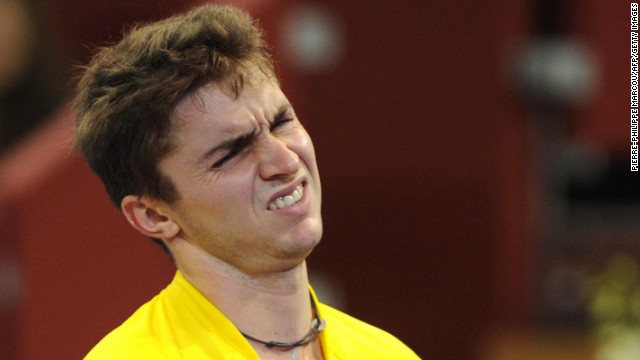 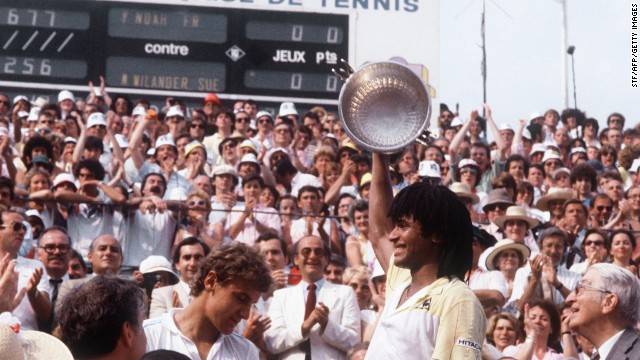 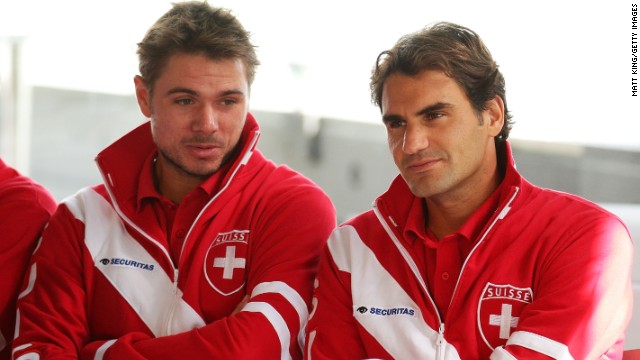 Switzerland, meanwhile, only has two men in the top 100 -- but both Stanislas Wawrinka, left, and Federer are grand slam singles champions. 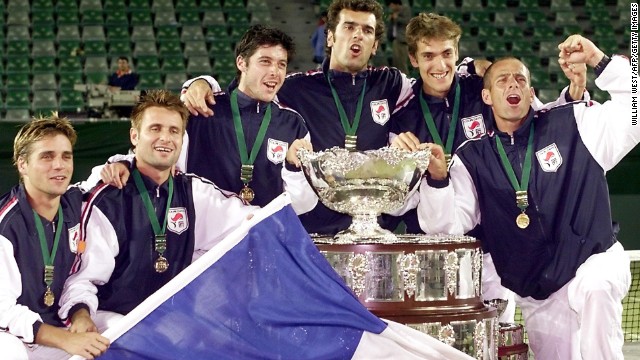 Gasquet, Tsonga and Monfils have all spoken about wanting to win the Davis Cup for France this year. Les Bleus -- who will face Germany in April's quarterfinals -- last triumphed in the team competition in 2001 when they defeated Australia on the road.
HIDE CAPTION
Promising future
Expectations raised
Close call
Bright Benoit
No-go, Jo
Blown a Gasquet
Elastic not-so fantastic?
Dreams dashed
A long drought
Needles in the haystack
All for one?
<<
<

Jo-Wilfried Tsonga, Richard Gasquet, Gael Monfils and Gilles Simon were being dubbed the "New Musketeers," a reference to the "Four Musketeers" from the same nation who dominated tennis in the late 1920s and early '30s.

Tsonga was the big-hitting, charismatic leader of the bunch; child prodigy Gasquet, with his smooth one-handed backhand, was likened to an artist; Monfils played defensive tennis like no other but also possessed the requisite punch on his strokes; and Simon owned the rare ability to turn defense into offense in an instant.

But five years on, that optimism has lessened.

In fact, just one grand slam singles title would do -- France's last by a male player came 31 years ago, courtesy of Yannick Noah.

Given the grip of the so-called "Big Four" on the men's game -- and the performances of Tsonga, Gasquet, Monfils and Simon -- even that appears uncertain, although Stanislas Wawrinka's surprise Australian Open victory gives the quartet hope.

In Melbourne in January, some members of the French media lamented a familiar pattern at grand slams recently: Handfuls of French men appear in the singles draw but not many reach the quarterfinals or beyond.

None landed in the last eight at that Australian Open, and none made the last 16 at last month's Indian Wells Masters in California -- arguably the most prestigious regular-season tournament outside the four majors.

"I think it's a mix of different feelings in France," says Patrice Dominguez, tournament director of a men's event in Montpellier and the former national technical director of the French Tennis Federation. "Obviously the expectations were big ... big for a while."

When asked if the foursome have lived up to their potential, he replied unequivocally: "No, not yet. I really feel like they haven't reached their maximum."

And yet, the path of the four might have been completely different.

Novak Djokovic faced Tsonga in the 2008 Australian Open final, each bidding for a maiden major. It was Djokovic who prevailed, and the Serb subsequently posted one of the finest campaigns in tennis history in 2011.

Andy Murray and Simon share similar, counter-punching styles. Six years ago, they finished three places apart in the rankings and competed at the year-end championships. Murray beefed up and has since amassed two grand slam titles.

"Gael was probably the most gifted of the four," Dominguez told CNN. "He has everything."

Gasquet's mental toughness has been questioned in the past -- something even he is aware of, though he has improved -- and he lacks an overpowering serve.

Since gracing the cover of a French tennis magazine as an adolescent, Gasquet has rarely escaped the eye of the public.

"He's like the baby brother of the country and the people have been babysitting him since he was nine years old," Carole Bouchard, a tennis writer with French sports daily L'Equipe, told CNN.

"They love him. And they want him to succeed. At the same time, sometimes he gets on their nerves.

"It's a love-hate relationship but more love than hate."

Gasquet, encouragingly, put together his most consistent season in 2013 and made a second appearance at the year-end World Tour Finals.

Tsonga's all-action game is deemed high risk, with Dominguez adding that the world No. 12 doesn't win enough matches when not playing at his best.

Injuries have consistently hampered the 27-year-old Monfils, who -- despite often preferring a defensive style -- at times seems more concerned about pleasing fans than winning matches.

Tsonga, Gasquet, Monfils and Simon are four of the dozen French men in the benchmark top 100, so depth isn't an issue for France -- the other three grand slam nations of Australia, Britain and the U.S. have fewer than 12 players combined in the top 100.

"We know how to build players and to reach the top 10," said Dominguez. "After the top 10 and inside that, what is making the difference? Not the federation or coach. It's the real wish, investment you put in -- and that's the individual's desire."

For Patrick Mouratoglou, who runs an academy outside Paris and coaches women's world No. 1 Serena Williams, the lack of a grand slam champion comes down to "ambition."

"I always say we are a great country to build the players," Mouratoglou told CNN's Open Court. "The thing maybe we don't have -- there are exceptions -- is the right mentality to raise champions.

"For the French players things are too easy for them. They make a lot of money in tennis quite early and I think we lack ambition. Maybe it's not in the culture of France to have very high ambitions.

"Grand slam winners are people who have very high expectations, who simply have the mentality of champions. I'm not sure too many French players have that mentality."

"Today I think Tsonga wants to win a grand slam, Gasquet is showing more ambition, a more demonstrative side on the court with the crowd -- more rage and enthusiasm. With age, time passes and you become aware of some things. Things move on and you realize there aren't many years left.

"I think all of that will come into play. They're going to have to react and say, 'I don't want to stop here, not having won a grand slam.'

"Lack of ambition related to the system? It's tough to say but it can't just be reduced to not getting the results that people want from the players.

"I think the ambition that we have is to develop a culture of winning. But there is also a side that is very personal."

Gasquet, twice a grand slam semifinalist, told Open Court he would "fight" for a first major, and France's Davis Cup captain Arnaud Clement is adamant that one of his charges can break through.

Clement and Tsonga are two of the four French men to make a grand slam final since Noah thrilled the home fans at Roland Garros in 1983.

"It's going to be tough because tennis is strong in the top 10," Clement told Open Court. "But we saw Wawrinka won. He worked a lot, he's smart, and he did it.

"I am sure it's possible for all my players, too."

The more realistic target, however, might be to capture the Davis Cup -- it's a major goal for Gasquet and the other leading French players. The drought in the competition isn't 31 years but lengthy nonetheless at 13.

France is the favorite against Germany in the quarterfinals at home this weekend, and France versus Federer's Switzerland is a potential blockbuster final in November.

"Beware of this generation -- they're not finished," said Di Pasquale, who beat a young Federer to claim bronze at the 2000 Olympics. "I don't think we can draw conclusions. I cross my fingers."

Read: What Mauresmo did next