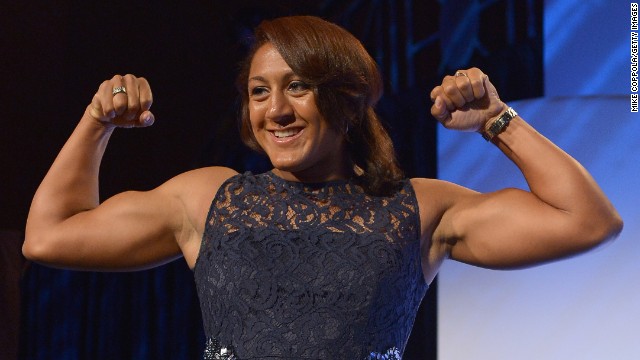 U.S. Winter Olympian Elana Meyers was told she had the perfect build for rugby sevens, so opted to make the switch. 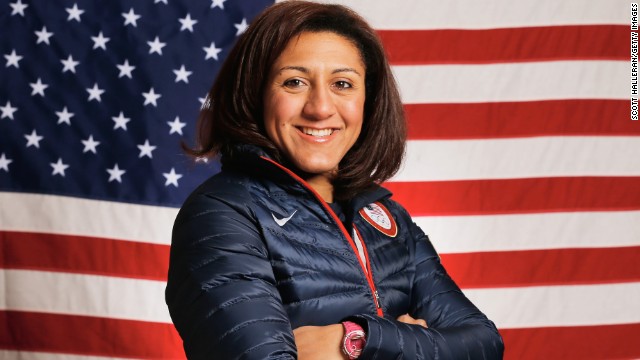 The aim of her sporting transition -- however temporary -- is to make the U.S. team for the 2016 Rio Olympics. 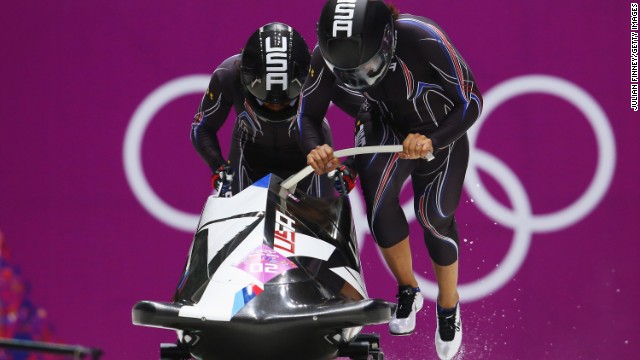 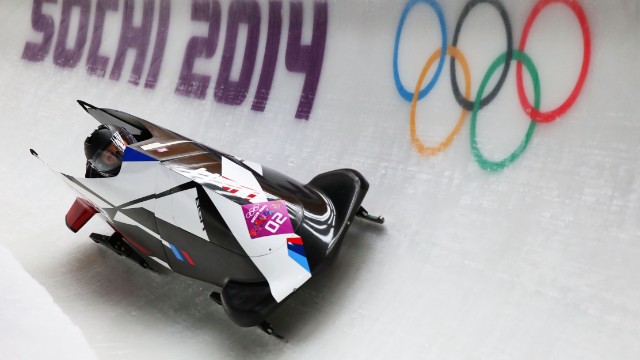 Meyers, though, admits she has been haunted by the "what if?" factor after the pair finished a fraction away from the gold medal. 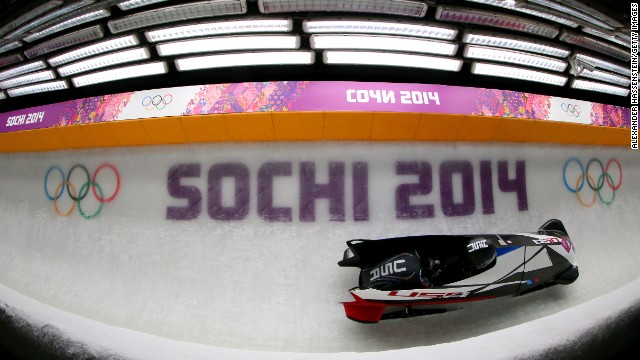 They had been leading after three of four runs, but just dropped back in the finale as Kaillie Humphries and Heather Moyse won gold for Canada. 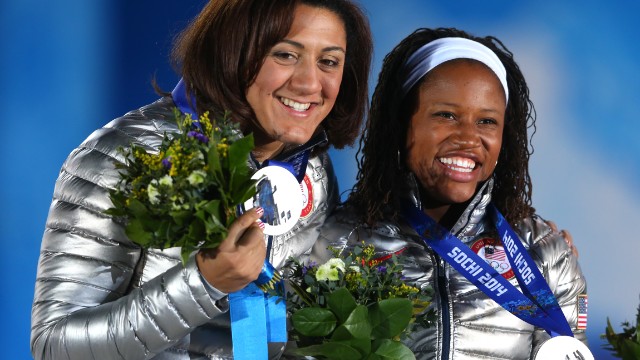 (CNN) -- A month ago, Elana Meyers was hurtling down the Sochi bobsleigh track at 150 kph on her way to winning an Olympic silver medal.

Now the 29-year-old has swapped the ice for a rugby ball as she sets out on her quest to be a Summer Olympian with the United States sevens team at the Rio Games in 2016.

It's an ambitious bid -- Meyers had never played the game until two weeks ago.

"I'm offside all the time," she says frankly. "I'm running ahead of the ball all the time.

"The other problem is that with the bobsleigh, I was used to just running in a straight line. That seems to be my default setting, and it doesn't work like that in rugby sevens. It's a sharp learning curve."

Meyers could have been forgiven for taking more time off after the Olympics. With a bronze from Vancouver four years ago, she had gone to Sochi seeking gold with new partner Lauryn Williams -- a track star who tasted success at London 2012 in the 4 x 100 meters relay and won 400m silver in 2004.

In the end, they came agonizingly close to victory, edged out by just one-tenth of a second after four runs on the Olympic course by Canadian duo Kaillie Humphries and Heather Moyse.

It left Meyers with her demons. In the following days, she wrote on her blog: "Every night, I'm haunted by that last run. I haven't slept much since it happened. I replay the skids so vividly in my head that any thoughts of the other corners are reduced to a mere hazy memory.

"So how does it feel to feel like you choked in front of the whole world? How does it feel to have your lifelong dream slip away literally from your fingertips? It sucks. Was I too exhausted? Did I just finally hit my mental limits? I don't know."

The inquest into every painstaking moment of that final run -- the American duo's slowest by half a second -- has dissipated in recent weeks, but Meyers concedes "you still can't help going through what happened, what you might have done differently."

She has allowed herself to increasingly dwell on the silver lining of Sochi more often than asking "what if?"

Thankfully, there has been barely been a chance to stop and think -- there were welcome-home celebrations in Georgia before she set out on her sevens mission, and Meyers also has a wedding to plan.

Prior to traveling to Russia, U.S. Eagles coach Ric Suggitt invited Meyers to the US Olympic Training Center (OTC) in California to test herself at rugby.

"A couple of girls on the bobsleigh team had previously played rugby and made the switch," she says. "So I thought why can't I do it the other way around?

"The coach asked me if I was interested in coming to practice and then come out after the Olympics for a trial. I'd never tried it out before so I thought, 'Why not?'

"Even though I haven't played the game before, I think they looked at me and thought I was the right build. I'm a big girl -- I'm 175 lbs and 5 foot 8 inches -- so I knew I wasn't worried about doing the hitting or getting hit.

"I think I was just worried about not knowing the rules. It's been a case of out of the frying pan and into the fire, but it's been a blast."

The switch of sports is nothing new for her. Her first sporting foray of note had been in softball and there were hopes of being selected for the U.S. team for the 2008 Olympics. She missed out, and the sport was duly scrapped from the Olympic schedule.

By then, her focus had already switched to the bobsleigh, an event she first tried out in 2007.

It has brought her two Olympic medals and two world titles, as well as a fiance -- fellow American bobsledder Nic Taylor.

The pair had been dating for two years when Taylor took the decision to pop the question at the 2013 world championships in St. Moritz, with Meyers standing on the podium.

Taylor had roses in his hand when he was handed the microphone by organizers, and he dropped to one knee. At the time, Meyers admitted: "It was such a shock. It was amazing."

As if mastering a new sport wasn't enough, Meyers is now planning a wedding for April 24.

"It's been crazy but it's mostly planned. Obviously the focus was on Sochi so we were a little bit late out with the invitations but we're steadily getting the RSVPs in," she says.

"I'm getting married at my parents' house. It's already been a great 2014 whatever happens with the rugby, and I'm pretty excited about the big day."

The pressure is on Meyers to play a remarkable game of catchup with her fellow American rugby players as she attempts to marry her strengths to the requirements of the code -- a shortened version of the 15-a-side union format.

But as an athlete nicknamed "E-Money" -- from her ability to deliver when it counts in the pressure situations -- she is confident she will get to grips with it.

"If it goes well, it would be awesome to be part of the team in Rio," she says. "Rio was the thing that got me interested and that's the very obvious goal.

.@NicTaylorUSA proposed to @eamslider24 on the podium after she won silver at 2013 Worlds. Here he is cheering her on pic.twitter.com/0YTRSFx6mb

"But that's some way off. My legs were burning so much from that first week. It's not that I'm not fit but this is such a different level of fitness, there's so much cardio.

"But I'm optimistic that I'll get better ... a lot better. To get to Rio would just be super crazy."

In her sporting switch, she has had a useful ally in Williams.

"Lauryn talked about how special the Summer Games was, how huge it was," says Meyers. "She talked a lot about the pressure of being on the start line for the 100m final.

"I've basically been asking her for as much information as possible. She's given me some good advice."

Meyers has oval-ball history -- her father used to play in the NFL for the Atlanta Falcons, though his career was coming to an end when she was young.

"If I'm honest, the thing I remember the most was the team mascot, Freddie the Falcon," she says laughing.

"I really remember there was a McDonald's nearby and I remember eating a cheeseburger in the playground when the Falcon appeared. I'm not sure my Dad appreciates that being my favorite memory of him playing."

Despite her new sporting flirtation, Meyers is not divorcing herself from the ice track just yet.

"As we get closer to Rio, I realize I may need to change my approach and focus more solely, on sevens, but I don't want to give up the bobsleigh at the moment. I love it too much."

Read: Rugby sevens in Las Vegas - like Mardis Gras and the Olympics