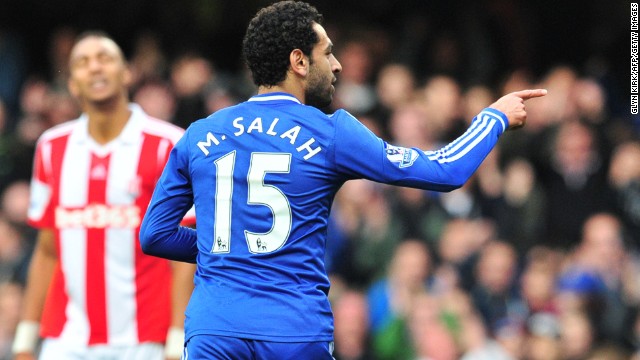 (CNN) -- Chelsea returned to the top of the English Premier League on Saturday, but it gave manager Jose Mourinho little hope that his side can win the title.

The Portuguese, who was triumphant in the first two seasons of his first spell at the London club, remains adamant that Manchester City still hold the advantage.

Chelsea's 3-0 win over Stoke put Mourinho's team a point above Liverpool, who travel to West Ham on Sunday, with City another point back after a similarly comprehensive 4-1 victory against eighth-placed Southampton earlier Saturday.

Manuel Pellegrini's team, who have already won the English League Cup, have two games in hand on Chelsea.

"We have five matches to play in the Premier League and we have to try to win all five," said Mourinho, who returned to Stamford Bridge last year after leaving Real Madrid.

"With Liverpool we have to play against them, so we have one match we have three points to discuss with them -- with Manchester City we do not play so they have their destiny in their hands and the only thing we can do is to continue to win matches."

Egypt winger Mohammed Salah gave Chelsea the lead in his first start since signing in January, then won a penalty from which Frank Lampard followed up his own saved attempt to net his 250th career goal. Brazil midfielder Willian wrapped up the win with 18 minutes left.

While Chelsea may still be involved in the Champions League, albeit nursing wounds after a 3-1 defeat away to Paris Saint-Germain in midweek, City's focus remains on a second domestic title in three seasons.

"We are enjoying a very good second round of fixtures where the results are much better than the first half," Pellegrini said after City moved six points clear of fourth-placed Arsenal.

"We've had four wins and one draw in our last five games -- maybe we had low performances in the month of February and at the start of March but I think that now the team has come back to its best performances."

Manchester United moved up to sixth place with a 4-0 win at Newcastle, but Tottenham could reclaim that position from the defending champion by beating bottom club Sunderland on Monday.

"The focus could only be on this game but you could see we've left a few players at home and not played a few players, and we are hoping they will be fit for Wednesday night's game at Bayern Munich," he said.

Fulham moved off the bottom of the table with a 2-1 win at Aston Villa, who were missing top scorer Christian Benteke due to an injury that rules the Belgium striker out of the World Cup.

West Brom grabbed a crucial 1-0 win at Norwich that put both clubs level, five points above the relegation zone.

Hull moved up to 12th with a 1-0 win over Swansea that left the Welsh team in a nervous position above the bottom five.

Crystal Palace moved up to 14th with a 3-0 win at second-bottom Cardiff.

Read: 'Schwein' - a headline too far?