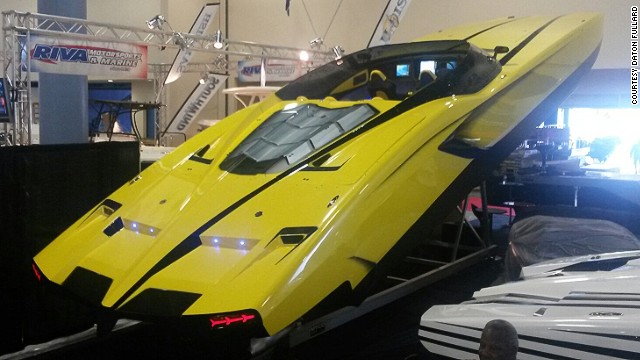 Introducing the $1.1 million Lamborghini-inspired supercar yacht, on show at the Miami Boat Show. 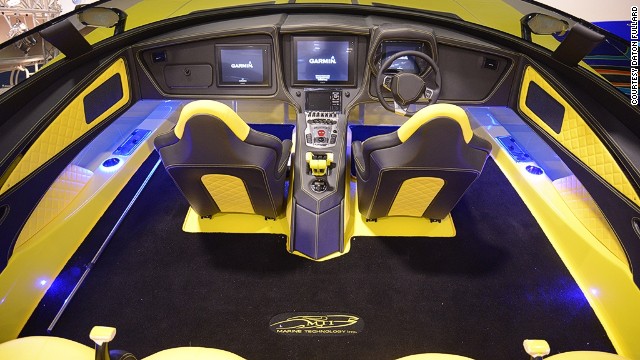 The luxury vessel is the pride and joy of Gino Gargiulo, a 48-year-old automobile maintenance and restaurant chain mogul from Miami, Florida. But not everyone is impressed, with former BBC "Top Gear" presenter Quentin Willson declaring it tasteless. 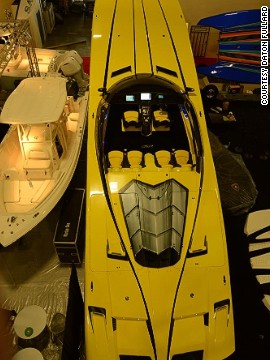 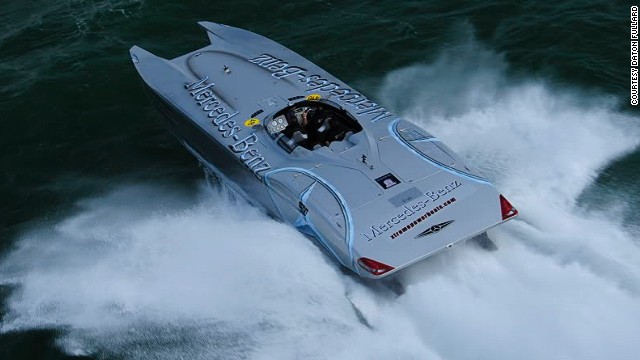 It's not Gargiulo's first supercar yacht -- in 2007 he commissioned this Mercedes Benz-style boat, also created by Marine Technology Inc. 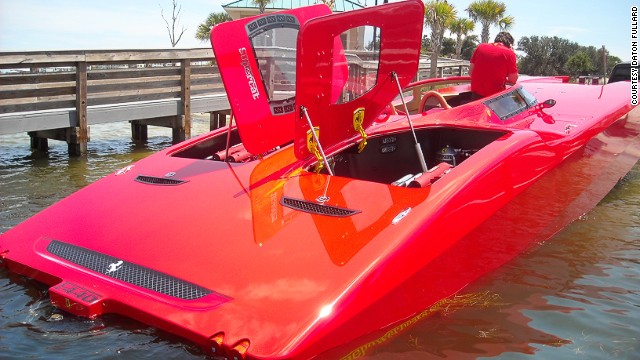 The company also made this Ferrari-inspired yacht and a Corvette-style boat for other wealthy clients. "The people that own these boats, already own the vehicles," says Larry Goldman, owner of Xtremepowerboats, which deals the pimped-up yachts. "Nobody wants a boat to resemble a car that they can't afford." 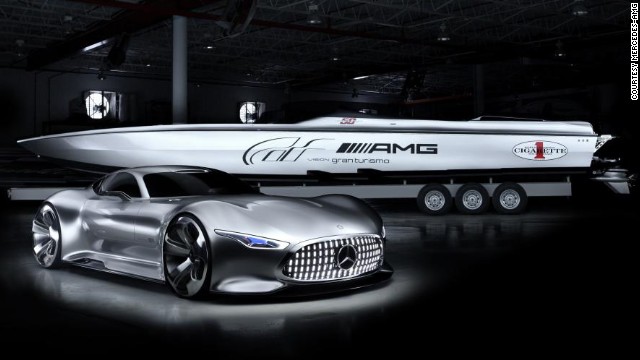 But what would a vessel designed by Mercedes-Benz actually look like? The German car company collaborated with Cigarette Racing on this Gran Turismo concept boat. 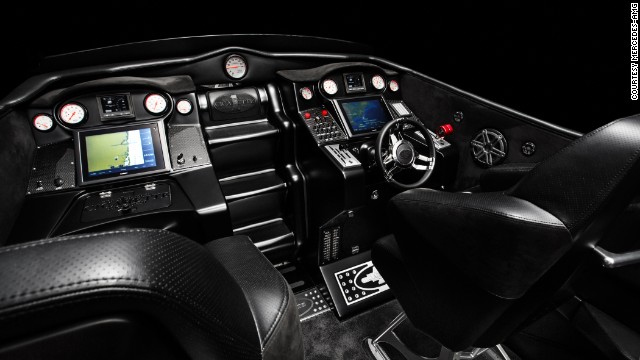 Inside, the plush speedboat has the luxury look you'd expect of a Mercedes vehicle. 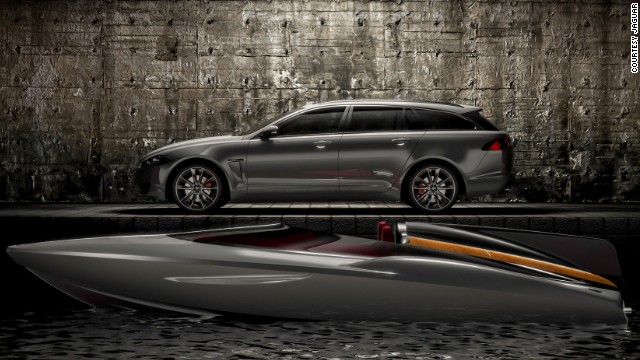 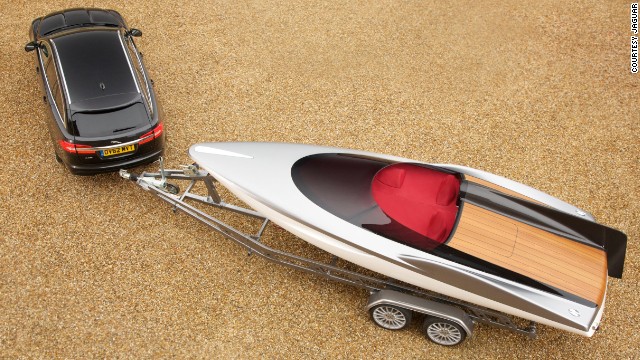 It was created to support the launch of the XF Sportbrake vehicle in 2012. 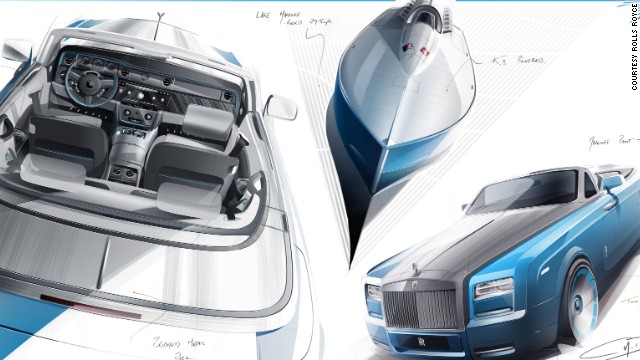 (CNN) -- The height of luxury -- or a vulgar monstrosity?

To its owner, this 15-meter, Lamborghini-inspired speedboat is the apex of nautical engineering. A sleek, innovative, gutsy vessel worthy of its $1.1 million price tag.

When Gino Gargiulo turned up at the Miami Boat Show with his banana-yellow beauties in tow -- the boat and the $750,000 car it resembles -- a small crowd quickly gathered around.

"This is the best boat you can buy -- it's the Lamborghini of boats," says the 48-year-old automobile and restaurant mogul from Miami, Florida.

"The response we've had ... letters, emails. If you do a Google search today there are 14,000 pages on it already -- and the boat's never even been in the water."

However, not everyone is impressed by the idea of a high-performance sports car dressed up as a superyacht.

To Quentin Willson, former presenter of BBC TV show "Top Gear," the Lamborghini boat is a tasteless display of wealth that screams: "I'm rich and bored."

Willson quickly moves into fourth gear with his analysis.

"And that's really sad. Anybody who's got that amount of money that they need to go and commission a special boat to keep them entertained -- I think it's nuts," he says.

What really sets Gargiulo apart is not his wealth or supercar yachts -- it's the fact that more than 25 years ago he was penniless and living on the streets of New York.

"I was a drug addict, on cocaine and crack," says the father-of-one, who today owns a truck repair company, a car paintwork group, and a chain of hamburger restaurants. 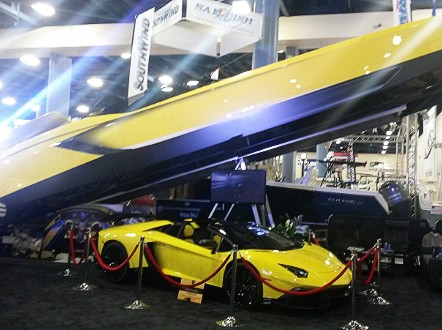 The supercar yacht: A question of taste?
Daton Fullard

"I lived in a halfway house for about a year. I really started with nothing and no help. And probably in fear of ever going back there, it's kept me motivated to this day.

"I work really hard, I make a good living, and all the things I didn't have for a long time, well now I can do it."

With his supercar yacht he has done it -- and then some.

"Like anybody that likes expensive things, it's definitely an ego thing," says Gargiulo, who also commissioned a Mercedes-style vessel in 2007.

"Maybe it's partially boredom. I'm one of those people that always has to have to have a project -- and I've been thinking about doing the Lamborghini boat for years."

Nobody wants a boat to resemble a car that they can't afford
Larry Goldman, Xtremepowerboats.com

The flashy vessel's engine package costs $400,000, a "homage" to his beloved Lamborghini car -- one of two he owns.

Gargiulo is not the only one with an ego in overdrive, by the sounds of it.

"The people that own these boats, already own the vehicles," says Larry Goldman, owner of Xtremepowerboats, which as well as the Lamborghini and Mercedes has also sold Ferrari and Corvette-inspired yachts to other millionaires.

"Nobody wants a boat to resemble a car that they can't afford."

Once someone decides they want a supercar yacht, it's up to engineers at Marine Technology Inc. to bring it to life, drawing up designs that take the most iconic features of the luxury automobile and transferring them to a working boat, capable of traveling 300 kilometers per hour.

"In the case of the Lamborghini, one of the most noticeable and sought-after features is the beautiful carbon-fiber scoops on the side of the car," says Goldman.

"They're quite pronounced and we wanted to make sure we used them in the design -- along with the exotic taillights and headlights, which are different to a normal car." 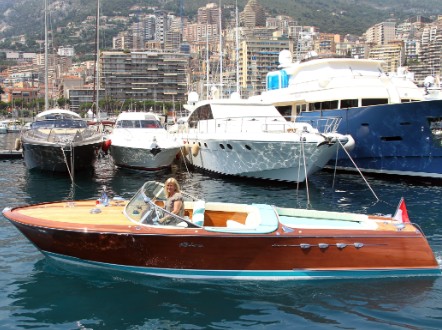 Sit in the driver's seat and the plush leather interior could easily be mistaken for the four-wheeled variety. The distinctive yellow paintwork is also identical, and seeing the two super vehicles together is a bit like witnessing a surreal Lamborghini festival for enthusiasts.

A question of taste

There's no denying this is a rare and expensive yacht. But it's not for Willson.

"If I was wealthy enough to go down the boat route, I would buy myself a lovely old period Riva motorboat," he says, referring to the vintage Italian wooden vessel.

"When you start making bright yellow Lamborghini speedboats, I think it means you are firmly detached from reality," he says by phone, having just driven through London in his own Mercedes SLS -- a supercar worth £175,000 ($290,000) and capable of doing 300 kph.

While Wilson ponders the meaning of taste, Gargiulo is getting his kicks from the adrenalin of driving one of these supercar yachts -- "Like nothing else in the world," is how he puts it.

When he first took his Mercedes version on the water, he felt like he was flying.

"I'm sure my wife Renea would prefer if I put a lot more money in the bank," he says. "But this is just me."

"I make a good living, I give to charity, and I like buying these kinds of things."

Read: Live like 'Wolf of Wall Street' on a movie yacht

See: Meet the 'great ladies' of the ocean