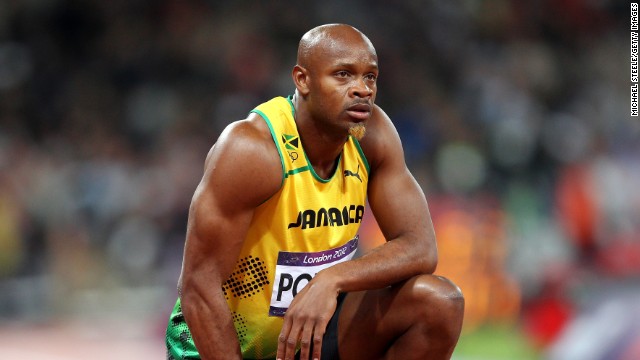 Powell confirmed Thursday in a statement sent to CNN through his agent Paul Doyle, that he had been sanctioned for having oxilofrine in his system.

As in the case of Simpson -- who won gold in the 4x100-meter relay at the 2004 Olympics -- Powell plans to appeal the decision made by Jamaica's anti-doping disciplinary panel to the Court of Arbitration for Sport.

A history of doping exposed

"This ruling is not only unfair, it is patently unjust," the 31-year-old Powell said in the statement. "Panels such as these, I understood, were assembled to allow athletes who, consciously or unconsciously, come into conflict with the rules of sport, a chance at equitable redemption.

"Unfortunately, this was not the case."

Doyle said Tuesday that Simpson, 29, took a supplement which didn't list oxilofrine as an ingredient and Powell made the same defense. They are former training partners, The Jamaican Gleaner newspaper reported.

Like Simpson, Powell tested positive at last year's Jamaican national championships and won't be allowed to return to competition until late December, with his ban backdated to last June. He could have been banned longer.

"I took a legal supplement -- Ephiphany D1," Powell said. "As it turns out, that supplement was contaminated with oxilofrine. My team commissioned two private laboratories that confirmed that oxilofrine was present in the supplements, despite it not being listed as an ingredient on the bottle nor on it's website.

Thank u for all the support u have shown me over the last 9 months - it means so much. You can find my statement here http://t.co/Pgwyzx1Q6Y

Powell held the world record in the 100 meters for three years prior to countryman Usain Bolt breaking it. Besides once being the fastest man in the world, Powell teamed with Bolt and two others to claim gold in the 4x100-meter relay at the 2008 Olympics.

He is also a two-time bronze medalist in the 100 meters at the world championships.

It was the first time in nearly 12 years and more than 150 tests, Powell added, that one had an "adverse" finding.

"It is for a stimulant ... a stimulant that is only banned during competition and experts have declared has no performance enhancing effects," he said.

"Sanctions for a stimulant and this kind of infraction usually range from public warnings to a ban of three months, six months in the most extreme cases; I was and am still more than prepared to accept a sanction that is in line with the offense.

"Instead nine months later what has been handed down is clearly not based on the offense nor the facts surrounding it.

"I want to reiterate that I have never knowingly taken any banned substances, I did all the necessary checks before taking Ephiphany D1."

When contacted by CNN, WADA said it would review the reasons for Thursday's decision before deciding whether it would appeal.