Gerda Taro: The forgotten war photographer you should know 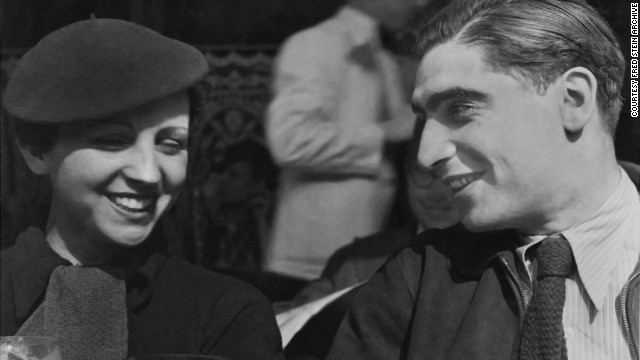 Gerda Taro and Robert Capa, in 1936. A year later Taro died while covering the Spanish Civil War -- she was the first female war photographer killed in action. 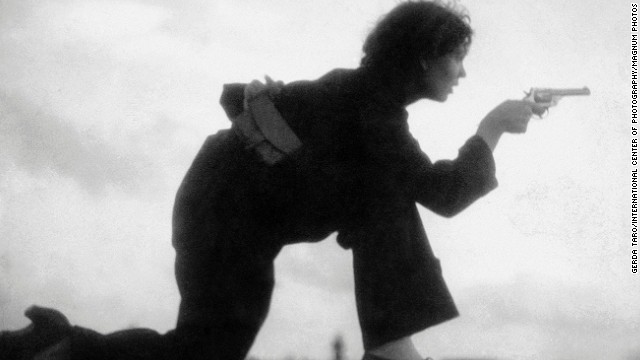 Taro and lover Robert Capa were known for getting photographs close to the action. It was later revealed many images attributed to Capa, were actually taken by Taro. Here, she captures a Republican militiawoman training on the beach, outside Barcelona, in August 1936. 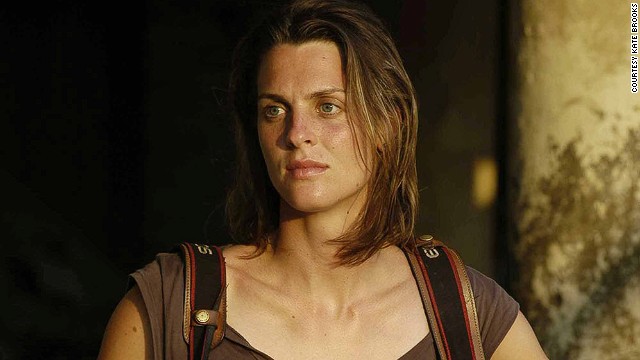 Today, there are many female war photographers risking their lives for the perfect shot. American Kate Brooks has covered conflict zones across the Middle East for over a decade. "Being a photojournalist, whether you are a woman or a man, isn't easy. Production budgets have largely dried up, so increasingly we are expected to produce pieces quickly, without proper field support," she said. 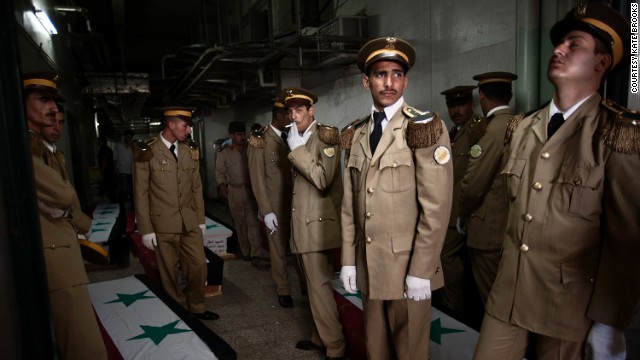 Here, Brooks captures the Syrian army holding a funeral service at the Tishreen Military Hospital in Damascus, for 42 government soldiers killed in fighting against insurgents. 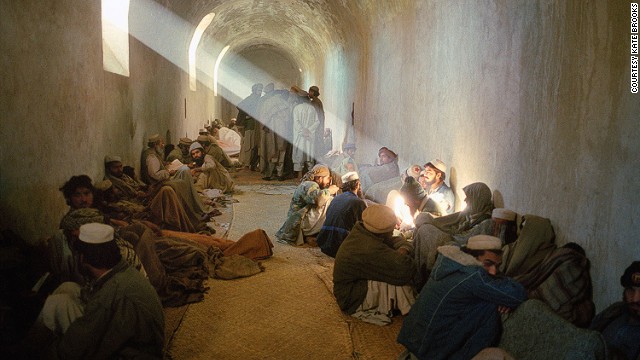 Pakistani militants are held in a makeshift prison after being captured for illegally entering Afghanistan, in another evocative photo by Brooks. 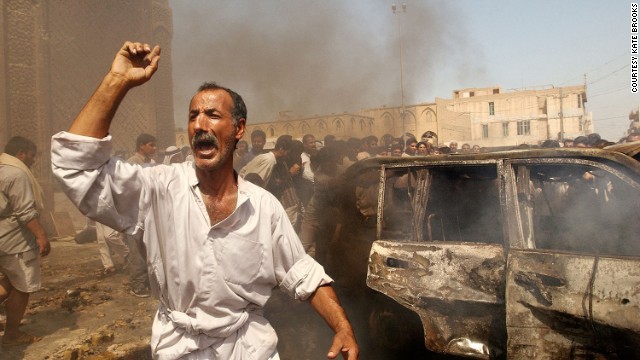 "There is no question that being exposed to trauma takes a toll," said Brooks. "The way that I manage it after all of these years is by limiting my exposure. I only take extreme risks when I feel personally compelled." 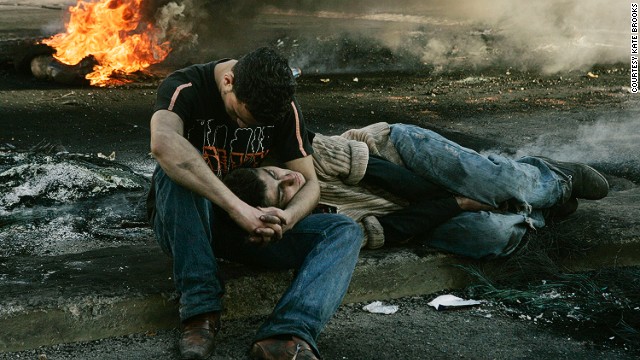 "Being a women photographer has always been an advantage in the Muslim world," said Brooks. "Generally speaking, foreign women are seen as a third sex -- we have access to the world of men, as well as women," Here, she captures Hezbollah supporters sleeping in the street after a day of violent protest. 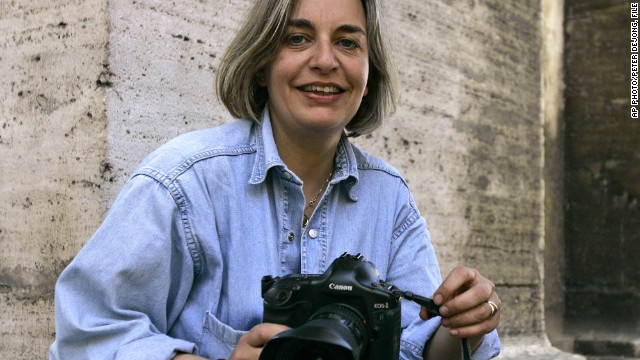 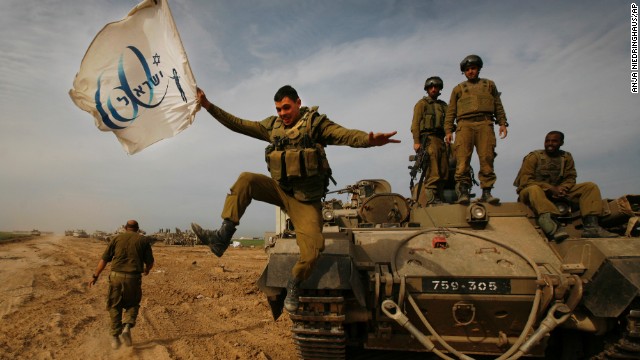 She was the only woman on a team of 11 Associated Press photographers that won the 2005 Pulitzer Prize for for their coverage of the Iraq War. In this photo from 2009, Niedringhaus captures an Israeli soldier jumping off an armored vehicle, while carrying a flag of the country's 60th anniversary. 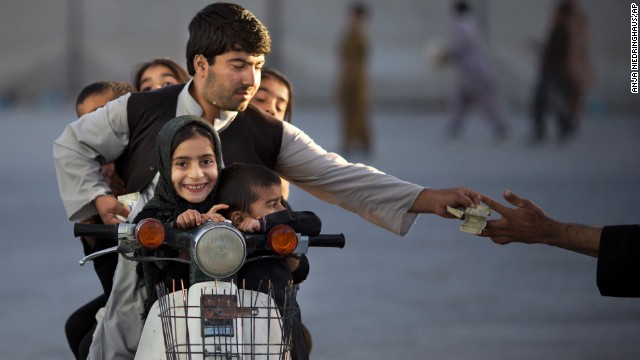 Niedringhaus had worked in the region for over 20 years. In this photo, she shows an Afghan man with his five children on his motorbike, paying money to enter a park in Kandahar. 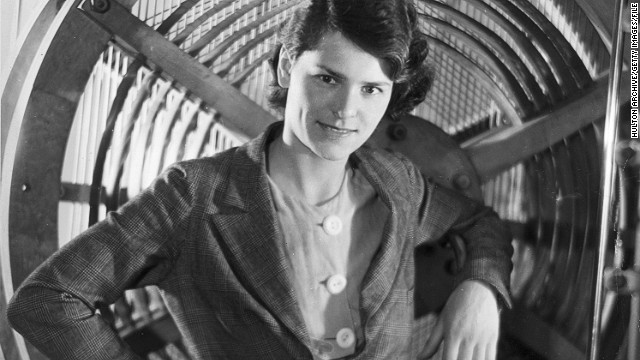 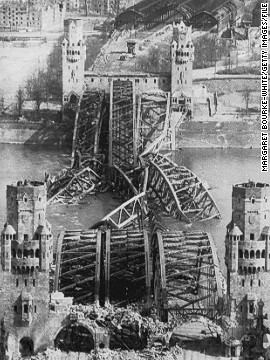 While crossing the Atlantic to North Africa, Bourke-White's transport ship was torpedoed and sunk, but she survived and continued to cover World War Two. In this photo from 1945, she shows the Hohenzollern Bridge over the Rhine in Cologne in ruins. 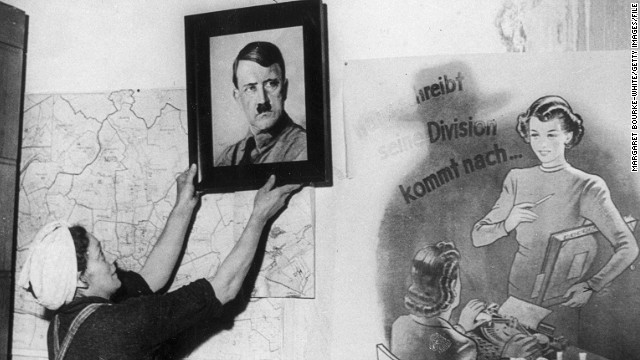 "It's not an easy profession and by and large it requires a huge amount of personal sacrifice," said Brooks. "From a historical perspective, Margaret Bourke-White was always a source of inspiration because she was such a pioneer." In this photo by Bourke-White, a woman removes a portrait of Hitler from the wall of a protestant church in Frankfurt at the end of World War Two.
HIDE CAPTION
Gerda Taro and Robert Capa
Fearless photographer
Kate Brooks
Price of war
Window into hell
Documenting anguish
Female photographers
Anja Niedringhaus
Action shot
Hope and heartache
Margaret Bourke-White
Survivor
Lasting legacy
<<
<

(CNN) -- Their job is capturing the most horrifying images on Earth -- keeping their eyes open, where others must look away.

These are the people who lug cameras into the darkest depths of humanity. Places too gruesome, heartbreaking, and dangerous for the average person to stomach.

They return offering us a small window into someone else's hell. And sometimes they don't return at all.

The death of war photographer Anja Niedringhaus, while covering Afghanistan's elections, made her the 32nd Associated Press staffer to lose their life on the job.

The 48-year-old Pulitzer Prize-winning German journalist was shot dead by an Afghan policeman, while sitting in a car waiting to pass through a checkpoint.

She had worked in the region over 20 years.

It's almost 70 years since the first female war photographer died in this line of work, and though few will know her name, many will recognize her famous lover.

Gerda Taro was 26-years-old when she died covering the Spanish Civil War in 1937. The bubbly, bold photographer supposedly left the trenches that day only because her film ran out, elated with the fantastic images she thought she'd captured. 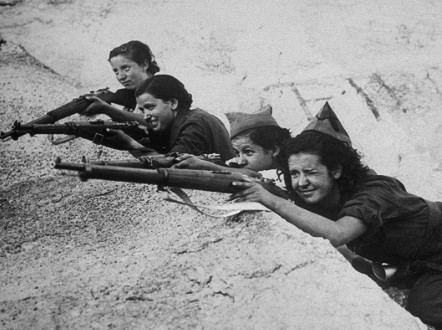 But the car she was traveling home in collided with an out-of-control tank, crushing her. Taro's photographs that day were never found.

The man waiting for her was Robert Capa, arguably the most famous war photographer of the 20th century, known for his haunting images of soldiers emerging from the sea during the D-Day landings.

"When he got the call he just kind of collapsed. And for the next few weeks he was just distraught. They were soul mates in many ways."

Love in a time of war

Their relationship began in Paris three years earlier. Both were penniless Jewish emigrants fleeing persecution -- he from Hungary, she from Germany.

I think their bravery partly came from their youth
Jane Rogoyska

They changed their names and invented new lives for themselves as photographers -- Capa teaching Taro how to take pictures, and she making the disheveled young man presentable to employers.

"They really had nothing but their talent and wits to survive on. And I think their bravery partly came from their youth."

With that bravery, came risks.

"If your photographs aren't good enough, you're not close enough," Capa famously once said, and after Taro's death he felt responsible not just having introduced her to photography, but for not protecting her on the day she died.

"Taro, like Capa, had a reputation for getting close to the action," said Rogoyska.

"They both had a policy of really trying to engage with what it was like to experience war -- whether it was civilians or the front line. That was quite a modern idea, so they were really quite striking pictures." 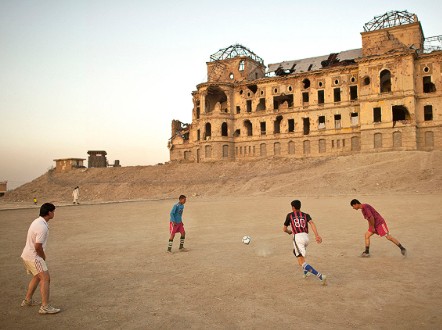 Indeed, gaze across Taro's images and you'll find soldiers huddled in trenches writing letters to loved ones, or bloodied air raid victims being carried away on stretchers, their pained expressions hauntingly close.

On the day she died, Taro was exhilarated, fearlessly holding her camera aloft to get the best shots, according to Ted Allan, the Canadian reporter traveling with her at the time.

What drives war photographers to risk their lives for an image?

"The idea that all war correspondents are adrenaline junkies is a cliché," said Kate Brooks, an American photojournalist who covered the 2003 invasion of Iraq.

"Journalists are generally driven by something much deeper," she said, adding: "Documentation is vital for the sake of collective memory, accountability and understanding."

The discovery of a "Mexican Suitcase" containing thousands of negatives belonging to Taro, Capa, and fellow photographer David Seymour (known as "Chim) a few years ago, revealed just how prolific their war coverage was.

Many photographs attributed to Capa have now been identified as Taro's.

"Taro's work was, until quite recently, largely overlooked in history," said Brooks, author of "In the Light of Darkness: A Photographer's Journey after 9/11." 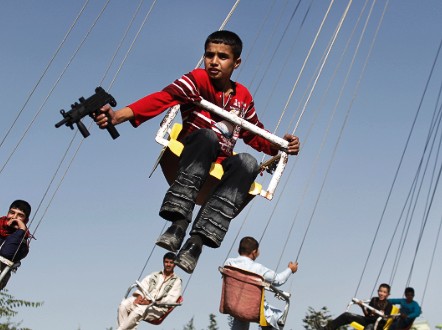 A boy holds a toy gun on a merry-go-round in Kabul, Afghanistan.
Anja Niedringhaus

"She had no one to carry on her legacy after Capa died -- she didn't have children and her family were killed in the Holocaust. Then World War Two eclipsed the Spanish Civil War and Taro's communist sympathies further obscured her memory in the McCarthy era."

We'll never know what might have become of Taro's career, had she survived.

But her window into a momentous moment in history, forever frozen in black and white, remain.