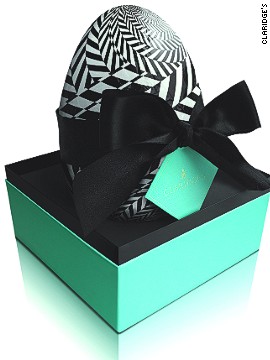 Ever year the chefs at Claridge's, London's celebrated Art Deco hotel, handcraft a series of limited edition Deco eggs, available in dark, milk and white chocolate. Chefs fill each egg, which costs around $90, with miniature chocolate eggs, making a sweet treat even sweeter. The black-and-white wrapping references the hotel's famous foyer, and the box adds another layer of luxury. According to pastry chef Ross Sneddo: "It's a way of extending the Claridge's experience into someone's home." 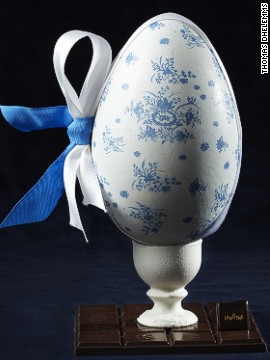 Guy Krenzer and his army of pastry chefs at Maison Lanotre dreamed up this chocolate masterpiece, which is inspired by Delftware and traditional Chinese porcelain. Available for purchase at the Musée des arts décoratifs in Paris, it's made from dark Tanzanian grand cru chocolate and has both fruity and spicy notes. 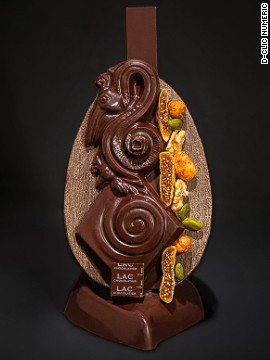 Famous for turning everyday objects into art, sculptor SAK joined forces with chocolatier Pascal Lac to create this ornamental egg called Pajaro, which means 'bird' in Spanish. The artists' idea was to pay homage to the Mayan civilization, which considered chocolate the food of the gods. 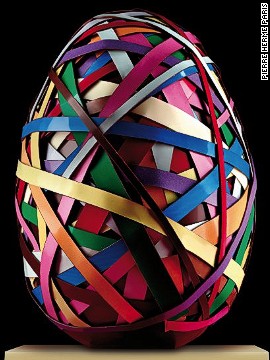 This may look like an orb made of rubber bands, but it is actually an edible Easter egg from French pastry chef Pierre Hermé. It pays homage to the metal sculptures of Swiss artist Beat Zoderer by layering multicolored chocolate strips around an 875-gram Brazilian dark chocolate egg. Hermé has made 15 of the eggs, which retail for $290. 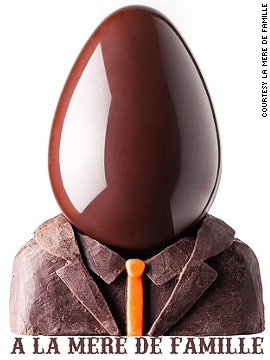 At La Mere de Famille, renowned chocolatier Julien Merceron dressed his egg in an elegant milk and dark chocolate suits. The "Tete d'Oeuf" comes with a colorful sheet of facial features to cut out and personalize the Easter treat. 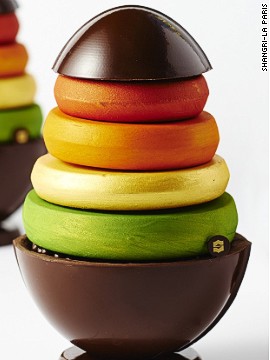 François Perret, the head pastry chef at the Shangri-La Paris, created his "toy egg" using Carupano 70% dark chocolate. Perret says he drew inspiration from "a fun and colorful toy that I loved as a child." The various layers can be unstacked and re-ordered before being gobbled up. 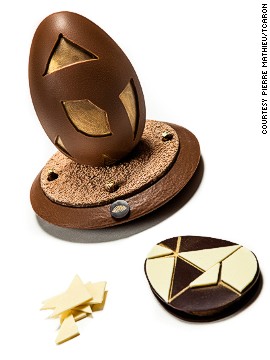 Pierre Mathieu, the head pastry chef at the Mandarin Oriental Paris, crafted 50 of these magical eggs using milk chocolate, white chocolate, praline peanut and gold decoration. Each egg required 90 minutes of work. Inspired by a Chinese tanagram puzzle, the lucky foodie can use seven pieces of white chocolate to form a shape on the egg's base. According to Mathieu: "This was a good way to combine the French knowledge we use to make chocolate with Mandarin Oriental's Asian heritage." Each egg costs around $95. 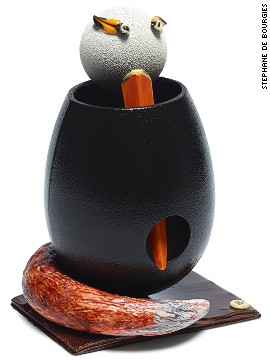 The chefs at Hugo & Victor, the luxury pâtisserie and chocolaterie in Paris, took inspiration from the magical world of French fabulist Jean de la Fontaine. In his fable the Fox and the Stork, the fox invited the stork for dinner and served soup in a bowl. While the fox lapped up his meal, the stork couldn't eat with his beak. In revenge, the stork served dinner in a narrow-necked vessel when the fox came around. The fox ended up leaving hungry. The moral? The trickster must expect to be tricked. 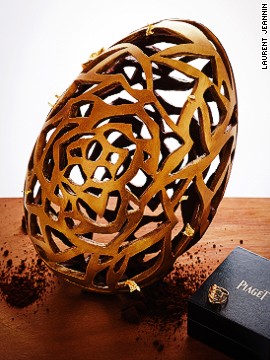 On April 20 children staying at the Le Bristol Paris will gather in the hotel's garden for its annual Easter Egg hunt. The tot who finds a pink egg will win this stunning chocolate egg, sculpted by head pasty chef Laurent Jeannin. The open-worked piece, inspired by the Piaget Rose collection, contains a magnificent Piaget Rose ring in 18 carat pink gold set with a brilliant cut diamond. Happy Easter, indeed! 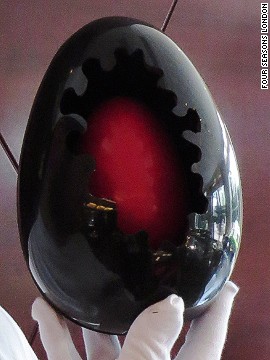 Loic Carbonnet, the head pastry chef at the Four Seasons Hotel London at Park Lane, spent 25 days making 50 haute eggs. Each egg, which costs $125, is actually an egg (7cm) inside an egg (13cm) inside an egg (22cm). Carbonnet spent seven hours crafting the first egg. He had to be careful to watch the temperature. The process involves heating chocolate to 50 degrees Celsius, then cooling it to 28 degrees, and then raising the temperature to 31 degrees to shape it. 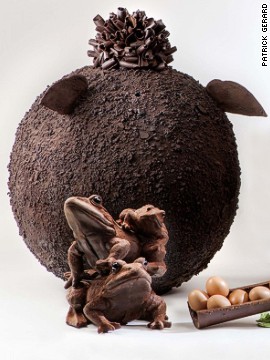 Chocolate artist Patrick Roger is famous for creating monumental chocolate sculptures, such as the 32-ft. tall chocolate Christmas tree he erected in his studio in 2010. For Easter 2014 he has created a chocolate menagerie, replete with toads and sheep. 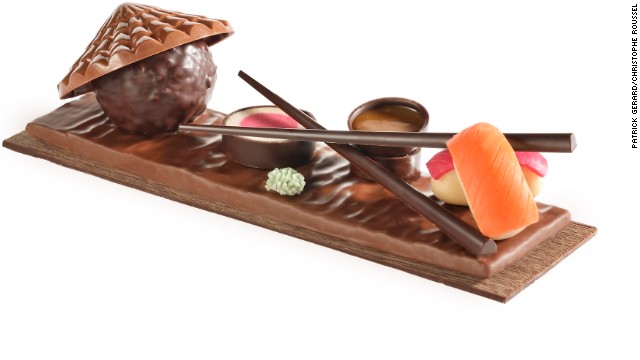 Taking inspiration from the Land of the Rising Sun, Christophe Roussel has created a sushi plate made entirely of chocolate, chocolate paste, marzipan and nougat. Chop sticks allow choc-o-holics to dip their colorful maki and sushi in salted butter caramel. 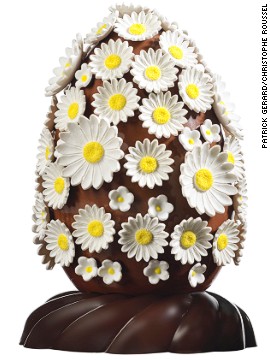 Chocolatier Christophe Roussel covered his chocolate egg with edible sugar daisies. You have to pick all of the flowers (she loves me, she loves me not...) to reach the grand cru Nyangbo 68% chocolate that lies beneath. 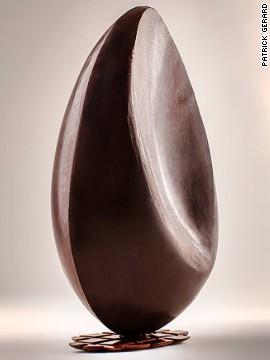 Patrick Roger sculpted this giant egg in the form of the moon in its last quarter. Using dark chocolate, he sought to capture the smoothness and richness of the chocolate and the luminescence of the moon. 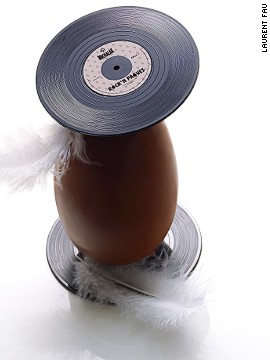 French chocolatier Christophe Michalak decided to give his Easter egg a rock 'n' roll vibe. Sandwiched between two chocolate records, praline and mini-chocolate eggs wriggle to the rhythm of Easter. 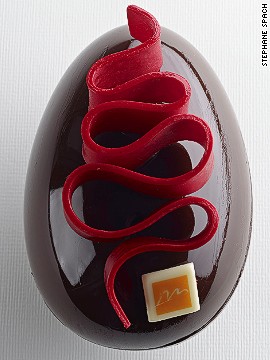 Alsatian chocolatier Thierry Mulhaupt went for simple and striking for his 2014 collection. Adorned with an elegant red ribbon made of sugar, Mulhaupt's egg oozes French chic.
HIDE CAPTION
All dressed up
As delicate as porcelain
Food of the gods
Ribbons of chocolate joy
Egghead
Child's play
Chinese puzzle
The Fox and the Stork
Chocolate jewel
Finest selection of design Easter eggs
Chocolate menagerie
Sweet Japan
An egg in bloom
Chocolate in the night's sky
This egg rocks
French chic
<<
<

Every April the country's top pâtissiers and chocolatiers prove they can be just as outlandish as they unveil their annual collection of chocolate Easter eggs.

Your sweet tooth will cost you more

A new twist on Willy Wonka

Guy Krenzer and his army of pastry chefs at Maison Lenôtre dreamed up a blue-and-white chocolate egg that resembles traditional Chinese porcelain.

Children staying at the hotel can participate in the Bristol's annual Easter egg hunt in its French garden. The child who finds a pink egg will win the sculptured chocolate—and an 18-carat pink gold Piaget diamond ring that is hidden inside.

Pierre Mathieu, the head pastry chef at the Mandarin Oriental Paris, says that France's obsession with the high-end egg stems from the country's history of gastronomy and Catholicism.

Apparently a gorgeous egg honors both.

Inspired by the Chinese tangram puzzle, the egg has seven removable pieces that together form a shape at the egg's base.

"I thought I could work on the idea of a chocolate egg that could be as delicious as it is playful, with an 'Asian' story and origin," Mathieu says. "This was a good way to combine the French knowledge we use to make chocolate with the Mandarin Oriental Asian heritage."

But this is no game.

"The most difficult part of the process is to fix the whole egg with the most accuracy and neatness as possible," he says. "I want the egg to look like a jewel, or a collectible." 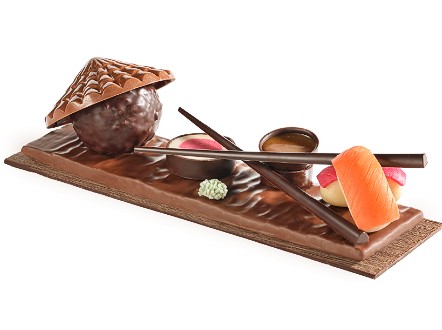 French chefs are bringing their magic to the U.K., and helping to elevate Easter eggs beyond the cream-filled, grocery store variety.

The $125 price tag reflects the labor involved in this most delicate process: Loic and his team spent seven hours crafting the first egg.

They had to watch the temperature throughout.

"The chocolate dictates your work and when it's ready. It's like cooking a piece of meat for a guest who wants it medium rare.
Loic Carbonnet, chef

"It's a long process because you have to temper the chocolate, then mold it, then create the right thickness," Carbonnet says. "If it's too thick guests cannot break it. If it's too thin it will be too fragile to travel."

Four millimeters is a safe thickness.

Carbonnet points out two other perils of his work.

The other issue is timing. A chef who leaves his chocolate on the stove for 15 minutes is signing his own pink slip.

"The chocolate dictates your work and when it's ready," he says. "It's like cooking a piece of meat for a guest who wants it medium rare. If you wait and let the meat rest for too long it will be overcooked. It's the same with chocolate. You cannot have a second chance."

For luxury hotels, Easter eggs are more than just sweet treats for guests. They are also an opportunity to help connect their brand with the joys of Easter.

At Claridge's, London's iconic Art Deco hotel, limited edition Easter eggs have become one of the hotel's most anticipated traditions.

Pastry Chef Ross Sneddon now has the process down pat.

"We use two molds which we then assemble to make one hollow egg," he says. "Once they are gently warmed, we melt and temper the chocolate by flooding, pouring, lining each egg shell 3 times with thin layers of chocolate. These shells are left to crystallize properly in their molds overnight."

They then de-mould the eggs, assemble the two halves, fill them with miniature chocolate eggs, and, to avoid a heavy and unsightly seam, use a warm metal tray "to melt the seam edge of the eggs which are then carefully joined together and left to set."

But perhaps the most crucial step—and the one responsible for the first impression—is the packaging.

His team use special black-and-white foil meant to invoke the hotel's lobby.

"We hope and hear that people love our Easter Eggs," he says. "It's a little bit of magic of Claridge's that people can take away with them".

Marcela Kunova contributed to this article