Secret life of a superyacht superhero: Serve and obey at all costs 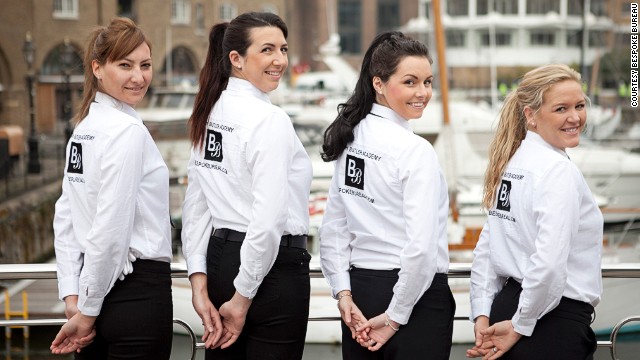 These young women are training to be superyacht stewardesses, where they hope to earn anything from $1,000 to $6,000 a week. 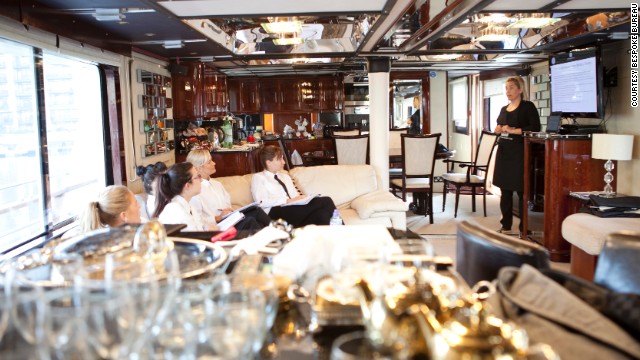 Here, they take notes from chief stewardess Titta, while on board 30-meter vessel "Absolute Pleasure" -- their home and classroom for a five-day training course. 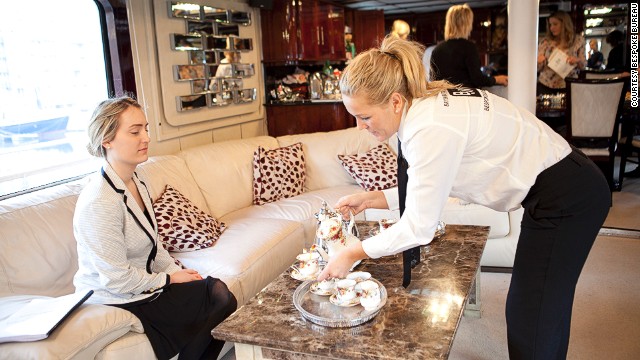 Billionaires demand many attributes from their staff. "There's one word you must never say: 'No' ," says butler Rob, a trainer for almost a decade. "It's always: 'I'll see what I can do Sir.' " 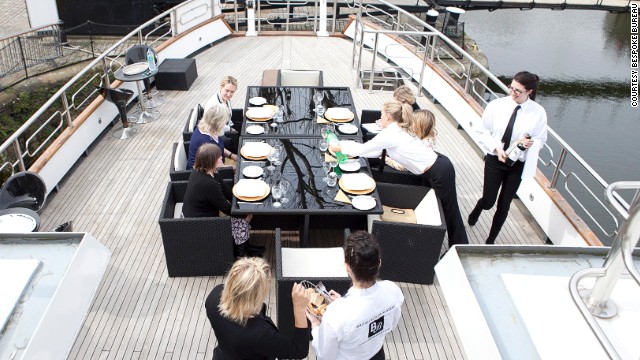 As part of the course, the women will learn silver service, food preparation, and etiquette. 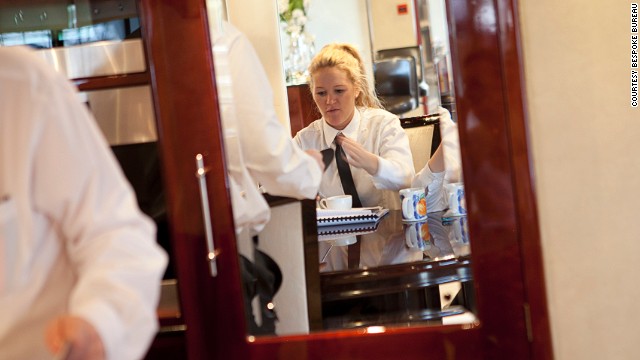 "One good greeting is: 'Have you come far?' The Queen always says that, it really gets things going," says etiquette teacher Angela Hargreaves. "Don't just stand there like a lemon, and always smile." 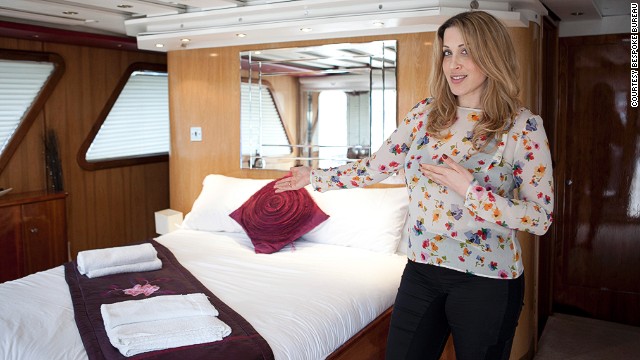 "The yacht is where the super rich come to entertain, it's where they want to show off, it needs to be perfect. And that's what we're teaching them here -- perfection," says Sarah Vestin Rahmani, founder of Bespoke Bureau (pictured). 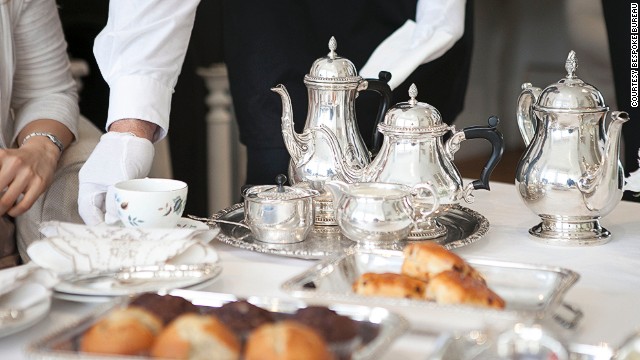 Superyacht stewards must cater to their billionaire boss' every whim -- that means memorizing their favorite meals, music and sleeping routines. 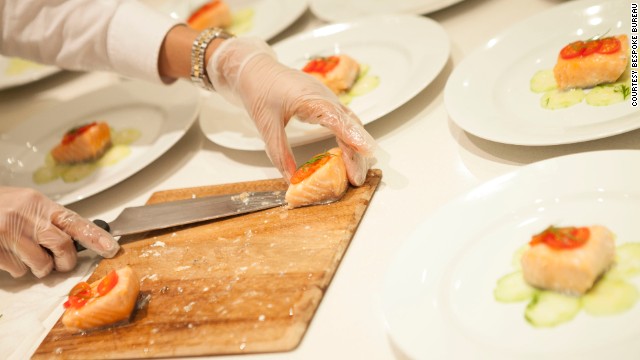 Many stewards barely get a chance to see the exotic places where they travel. But with accommodation and food paid for, they see it as a way to save money quickly.
HIDE CAPTION
At your service
Luxury living
Never say no
Ocean views
Practice makes perfect
Ship shape
Serve and obey
Fine dining
<<
<

(CNN) -- There's one word a billionaire's servant should never say.

"Banish it from your vocabulary," wide-eyed recruits are told. Because when money is no object, neither is the extent staff are expected to go in satisfying their master's most extravagant desires.

The financial titans of the world don't just require service par excellence -- they demand superheroes at their beck and call.

People willing to swim in jellyfish-infested water, survive on four hours sleep a night, and accept every criticism with not so much as a raised eyebrow.

Observant stewards must become instant experts on their wealthy boss's favorite meals, music tastes, heavens above even their bowel movements. 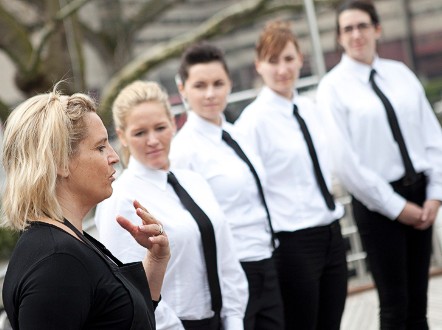 And if these foot soldiers of hospitality don't make the grueling regime look easy -- or keep quiet about the high profile lives on board -- then they're out of a job paying anything from $1,000 to $6,000 a week.

Is it worth it? The four girls training to become superyacht stewardesses, in London's stylish St Katherine's Docks, seem to think so.

They're on day three of a five-day training course, the only one of its kind in Britain, and one they have paid $2,500 to join.

And what better place to learn how to serve their future masters, than on a 30-meter luxury vessel called "Absolute Pleasure" -- their home and floating classroom for the week.

Emerging from their downstairs cabins just after 8am, the young women sleepily tuck in white shirts and adjust black ties before plunging into the morning's domestic duties. They prepare a continental breakfast with enough silverware to sink a battleship.

If they ask you to bring the moon in the sky to them, then you work out a way to do it
Annika, private jet hostess

This trio are the land, sea, and air captains of high-end hospitality.

"The superheroes of service?" I suggest. "Yes," says Annika politely, an immaculately presented Finnish woman, who has worked on private jets for over a decade.

The greatest superpower of all is adaptability, she says. "If they ask you to bring the moon in the sky to them, then you work out a way to do it."

"People who own a superyacht are the elite of the elite. The yacht is where they come to entertain, it's where they want to show off, it needs to be perfect. And that's what we're teaching them here -- perfection." 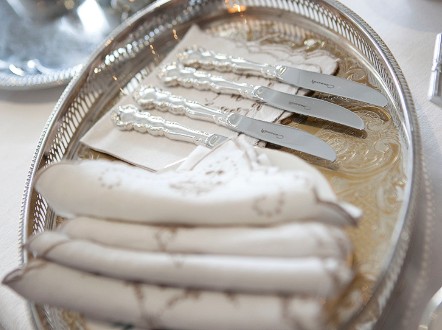 At your silver service.
Bespoke Bureau

Not just perfect service -- but perfect silence about life on board. "Confidentiality is very important," says butler Rob, whose past bosses include royal family members. Unsurprisingly, he won't divulge who.

"They're not just paying for you to do your job -- they're paying for your integrity as well. Unfortunately it's not like a tabloid newspaper's 'kiss and tell.' Once you lose their trust, you lose your job."

The first family of yacht design

The world's largest yacht belongs to ...

A harsh glare bounces off the water this humid April morning, while inside "Absolute Pleasure's" mahogany and mirrored dining room the first class of the day gets underway -- silver service.

"Serve water from right, bread from left, clear clockwise from right," demonstrates motherly Titta, a superyacht stewardess for over 25 years. The girls furiously scribble in their notebooks.

People who own a superyacht are the elite of the elite. The yacht is where they come to entertain, it's where they want to show off, it needs to be perfect.
Sara Vestin Rahmani

Titta leaves them in no doubt of the challenges ahead. "I worked for a Russian owner who liked breakfast at 12pm, lunch at 6pm, dinner at 1am," she says.

"He never went to sleep until 4am, and even then he'd only sleep for a few hours. They were the times he set and you had to keep up with him."

There are seemingly endless stories like this of servants going the extra mile -- and then some.

Vestin Rahmani describes two Australian superyacht stewardesses who even leaped into jellyfish-infested ocean for their master.

"They had a young, female, Arab boss, a very sweet woman who they adored and who never ever went in the water. But one day she was in the mood to go for a swim, even though there were jellyfish," she explained.

"So what they did was jump in the water and clear everything in front of her -- they got stung to pieces. It was a sign of respect from them. I just think it's a nice story."

Porthole to another world

Vestin Rahmani asks one of the girls if they'd also be willing to dive into danger for their master. "No," she answers, giggling nervously.

Many of the trainees are already working on superyachts and looking for some formal training.

One, who didn't want to be named, will be taking the place of her supervisor who recently got fired. "It's very tough," she says. "If they don't like your hair or the way your voice sounds, you're out." 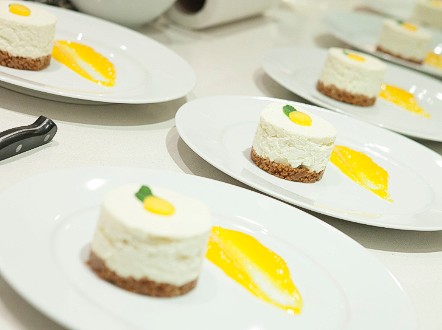 They are under no illusions about the realities of life on board.

"Girls come into this job thinking they're going to see the world. But really, you work so much, you only see things through portholes," says 30-year-old Carly Noades from Cornwall in south west England, currently working on a 38-meter vessel.

Working in international waters means many salaries will also be tax-free.

Everyone is a winner in this relationship argues Vestin Rahmani as she puts forward a version of trickle down economics.

"Imagine you had millions, billions. What would you want to do with your money? You'd want to have a good life, look after your family, your children, your friends," she says.

"These people have 10 households, some maybe more. So it's good for the economy in terms of retail because they buy a lot. And they're helping unemployment because they're hiring lots of people.

"I think people forget that these wealthy owners are making a difference -- and not a negative one."

Luxury sharing for yachts and jets

Here in this surreal world of master and servant the billionaire boss is effectively the God of their floating palace. Which brings to mind a line from the bible: "If they obey and serve him, they will spend the rest of their days in prosperity and their years in contentment."

For these stewardesses-in-training, they'll soon find out how true that is.

Read: Why size matters in the yachting world