Hollywood movies in Arab countries: A love and hate relationship 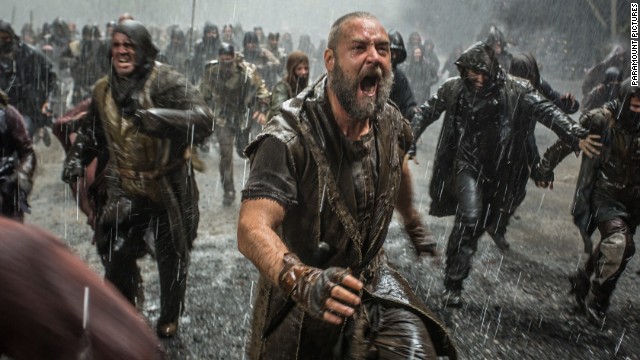 (CNN) -- Arab residents in the Middle East and North Africa may enjoy Hollywood blockbusters, but they are also wary of the content, saying it is potentially "harmful to morality," a study finds.

The "Entertainment Media Use in the Middle East" survey, commissioned by Northwestern University and the Doha Film Institute, interviewed more than 6,000 people -- both nationals and expats -- in Qatar, Saudi Arabia, Lebanon, Egypt, Tunisia and the United Arab Emirates.

According to the survey 45% of respondents say they watch Hollywood movies, but 34% say American films have content that is "harmful to morality."

Only 15% say U.S.-made films are good for morality -- as opposed to 71% who feel the same about Arab movies.

The soundtrack to Egypt's revolution

The respondents are also conflicted about other foreign films. While two-thirds say people benefit from watching movies from different parts of the world, 65% say they prefer films that portray their own culture.

More than half (54%) say films are an important source of information about their own culture.

Millions of birds migrate in Galiliee

It is no surprise that an overwhelming number prefer Arab films, which are favored by more than 80% of overall respondents. In contrast, only around half of the citizens surveyed say they enjoy American and European movies.

A large majority of respondents believe entertainment should be regulated for both romantic and violent content. More than two-thirds agree that films or other entertainment programs should be banned if they are deemed to be offensive.

Respondents in Saudi Arabia and Egypt show the strongest support for censorship -- 76% and 77% respectively. Tunisia appears to be the most tolerant of all, but still more than half of its respondents support censorship.

"These apparently contradictory findings really are not, but reflect how the Arab world is coping with globalization and still grappling to preserve local culture," Everette E. Dennis, dean and CEO of Northwestern University in Qatar, says in a statement.

In early March, three Gulf countries -- Qatar, the UAE and Bahrain -- announced that Hollywood biblical blockbuster "Noah" could not be screened in cinemas, saying the depiction of Noah -- whom Muslims revere as a prophet -- is taboo in Islam. 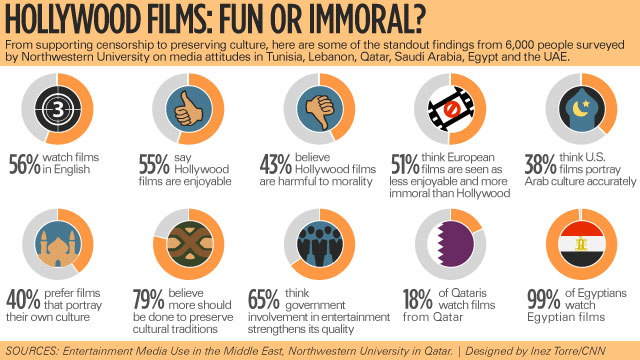 Two months earlier, in January, censors in the UAE and Qatar cut more than 40 minutes of the three-hour-long "Wolf of Wall Street," a Martin Scorsese-directed portrayal of a wayward stock trader, due to "foul language and explicit content," angering moviegoers in both countries.

In 2012, a Tunisian court fined the head of a private TV station 2,400 Tunisian dinars (around $1,400) after his Nessma TV aired "Persepolis," a French-American animated film whose depiction of God was slammed by some religious leaders as offensive to Islam.

Read: Publish and be damned? The state of press freedom in the Middle East

Read: The dangers of being a cartoonist in the Arab world