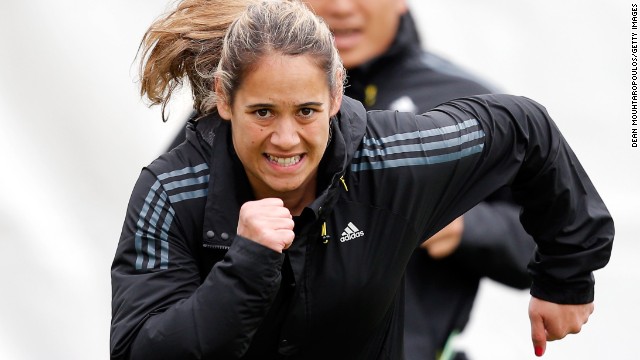 Kayla McAlister is one of the stars of the women's IRB Sevens as New Zealand bid to defend their world title this season. 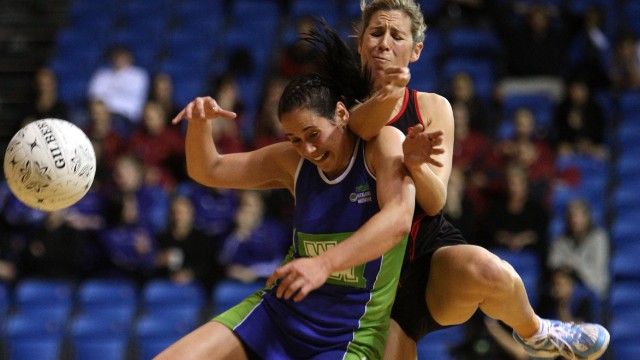 McAlister's first sporting love was netball but, disillusioned, she quit the sport and took up sevens instead. 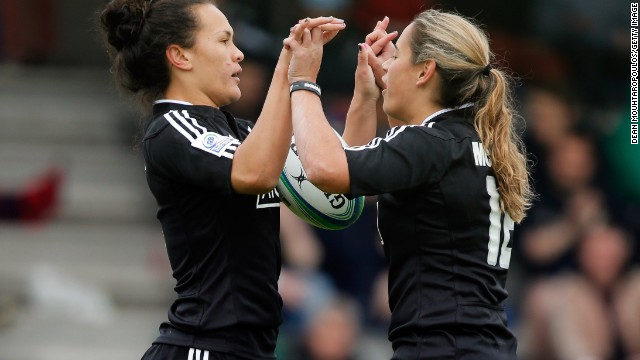 Through the Go4Gold scheme, she attended a military-style bootcamp with fellow netballer Portia Woodman (pictured left). 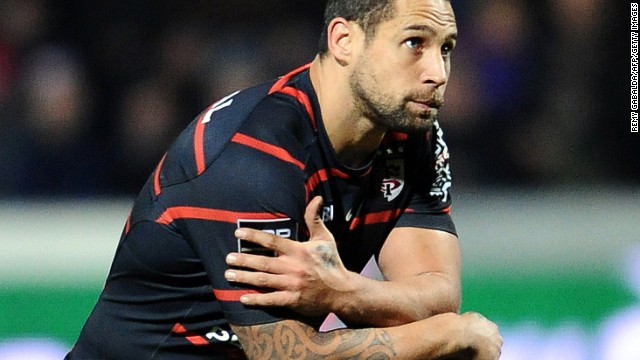 Rugby, though, was in her genes. Her dad Charlie used to play league while her brother Luke is a former All Black who now plays for French club Toulouse. 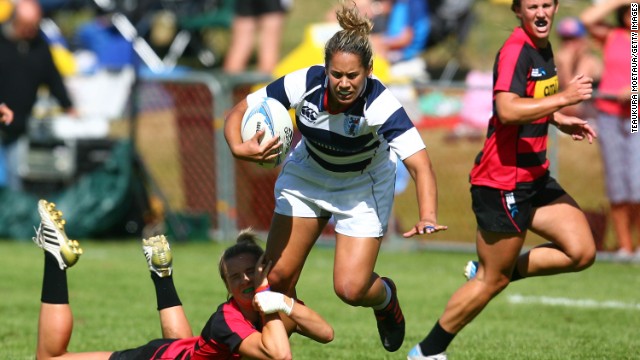 She made her first starts at club sevens level with Auckland before getting a rapid call-up to the national team. 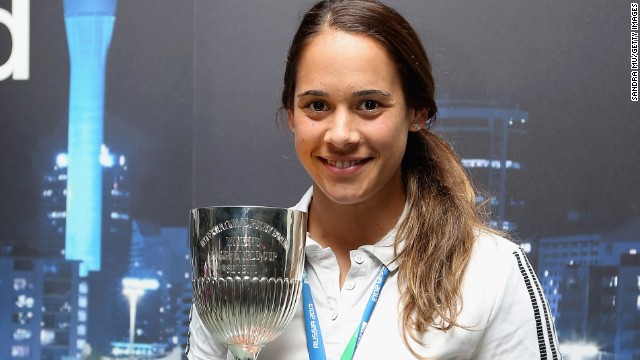 McAlister's rise up the ranks has been meteoric. At the end of last season she was named the IRB Sevens women's player of the year. 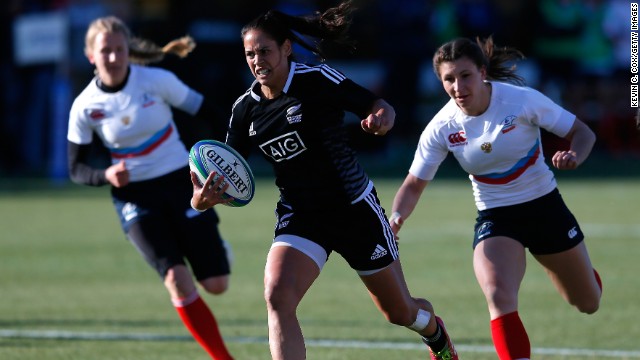 The New Zealand team has a two-point lead over Australia in the IRB Sevens standings going into May's Amsterdam finale. 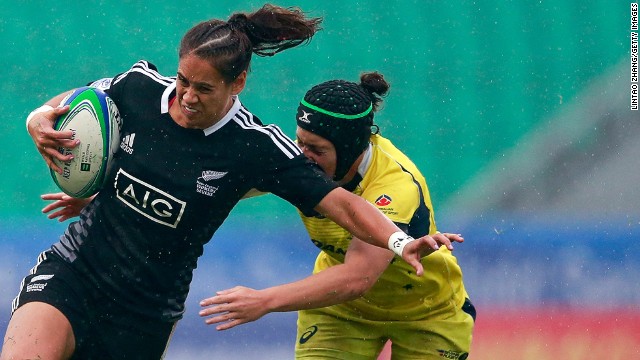 (CNN) -- Ten years ago, Kayla McAlister was hiding under her bed to avoid going to rugby training with her father and her All Black brother.

Today, she is the world's best women's sevens player -- an astonishing achievement given that she took up the sport as recently as late 2012.

Now the former netball player has Olympic gold in her sights.

"Rio is why I made the move," the New Zealander tells CNN. "I'd made our provincial team for netball but I was only on the bench that year and the following year I was cut.

It was her dad, Charlie, a former rugby league professional who played in England and Australia, that spotted New Zealand's Go4Gold campaign to lure women players to the sevens ranks with the 2016 Olympics in mind, and gave his daughter the nudge to follow in the family's rugby roots.

"So I went along with another netball player to try out. We turned up and were put through an Army assault course. It was horrific," the 25-year-old recalls.

"We were up at 5 a.m. and doing an obstacle course in -5 degrees in water. I remember at the time we were saying, 'What were we thinking, have we made the right decision?' "

The decision paid off in some style. Last season, New Zealand were crowned IRB champions and McAlister was named player of the year at the end-of-season awards.

This year, the Kiwis are top of the standings going into next month's deciding tournament in Amsterdam, after beating Australia in April's China final.

McAlister is New Zealand's leading try scorer this season with 20 -- one more than the netballer she tried out with, Portia Woodman, who touched down a record 12 times in Guangzhou, including the clincher in the final.

That McAlister has got to such heights so soon brought a wry smile to the face of her father and brother Luke, who now plies his trade with Toulouse in France after a six-year All Blacks career in which he earned 30 Test caps.

"I was terrible when I was younger," she admits. "Luke was a bit older than me so he and Dad were always out training.

"Dad would try to get me to train with them but I didn't want to. I wanted to hang out with my friends and that would have taken me away from my friends.

"So I tried to get out of it however I could, like hiding under my bed so they wouldn't find me.

"I'm gutted now as I wouldn't have had to work so hard on getting fit as a 25-year-old. I think they both laugh at me now."

Quite how she never made the move before, she admits, is a bit of a mystery considering her genetics. But then the opportunities for female rugby players had generally been limited.

Luke started playing for the All Blacks while Kayla was at high school, and she was aware of both the prestige and pressure of pulling on such a famous jersey.

"I used to watch him and I've learned so much from him," she says.

"When I used to watch I never really followed the rules properly though. I understood the basics but I've really struggled with somethings like the rucks.

"I watch the game in a completely different way now. If I can emulate just a little of what he's achieved I'll be happy with that."

McAlister's boyfriend Pita Ahki is also a promising star, having already represented the All Blacks sevens team and this year earning a place in the Auckland Blues' Super Rugby squad.

The sport has turned her life on its head. Until recently she worked for the Justice Ministry in an administrative post she had held for five years. Her rugby commitments -- training every day from 9 to 12 plus travel to tournaments -- meant that increasingly that came too hard to continue with despite her understanding and adaptable bosses.

So instead she has switched back to being a student -- studying part-time in childcare, in stark contrast to the rough and tumble of her fledgling rugby career.

She describes herself and women's sevens as being on a "steep learning curve" globally. At home, recognition is growing steadily for the sport.

"But abroad it's different," she says. "The All Black jersey carries so much weight wherever you go and it's then you realize how important and how prestigious it is.

"It's great to be a part of that. Those guys are kings and obviously we're a little bit down from that but it's growing all the time. There's more rugby in high schools now and we've got schoolgirls coming into our squad now. It's exciting."

Were sevens not in the Olympics, McAlister admits this would not be a path she would be pursuing, and that she might still be plying her sporting trade in netball.

"I might go back to it one day, I don't know really but I don't miss it, I haven't had the chance," she says.

"Also, there's so much freedom and room to move in sevens. I love that. I'm not sure I could go back to the confines of netball where you're so constrained by your movement on the court.

"The Olympics is why you get up every morning and train. I remember watching it as a kid and loving the athletics and gymnastics in particular. To be able to be a part of that would be pretty special -- to aspire to gold would be amazing.

"But it's so competitive right now and will be even more so come 2016. Between now and then, it's all about building with the girls."

Read: The history of sevens