Microsoft, Nokia and that mountain photo 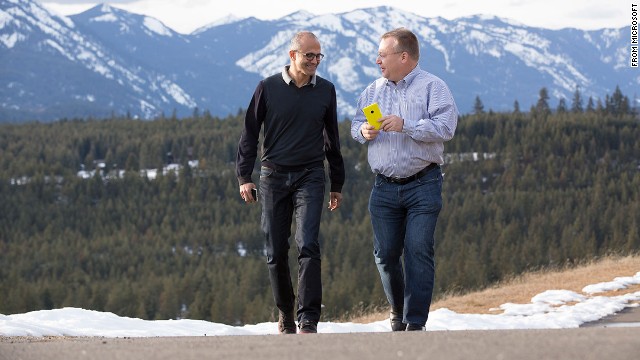 (CNN) -- The hills are alive with the sound of ringtones.

On Friday, Microsoft announced it had completed its acquisition of Nokia, the phone maker and longtime Windows Phone champion.

As tech announcements go it's no ... you know ... new iPhone or Samsung Galaxy rollout. The deal was well known and had been in the works for a while.

In what we can only presume was a shot staged on location, new Microsoft CEO Satya Nadella and former Nokia boss Stephen Elop are enjoying a casual stroll down a country road, smiling at Elop's Nokia smartphone with a snow-capped mountain range in the background.

At first glance, there's nothing overtly hilarious in the photo. But as you ponder it further (the sort of thing the Internet likes to do) it's the little oddities that get you. Are they stranded, "Deliverance" style?" What's so funny? Why is Elop clutching his glow-in-the-dark smartphone in both hands like Satella is about to steal it? Or, for that matter, why is he in shirt sleeves when there's snow on the ground?

And where are they, anyway? Wyoming? Finland? Middle Earth?

On Twitter, the jokes included the inevitable Photoshop treatment.

"it even runs Office!" MT @FutureBoy: how come you haven't photoshopped this Nadella/Elop pic yet? pic.twitter.com/apzTDa7jwZ

And more "Why are they in the mountains?" speculation.

I assume Elop and Nadella took an iPhone out to that lonely vista and ritualistically killed it as a warning to competitors.

And would it really be the Internet without awkward, romantic fan-fiction?

Their hands touch briefly as Stephen passes Satya the phone. Startled by the unexpected contact they look up at each other.

We took to our own Twitter account and asked you to caption the photo yourselves. And you didn't disappoint.

There were tech-geek "Brokeback Mountain" jokes.

@cnntech "Why can't I force quit you?"

And speculation about the conversation in progress:

What do you think? Share your own captions in the comments below.