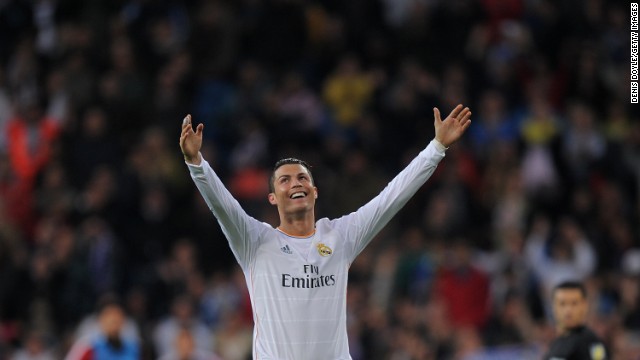 Cristiano Ronaldo celebrates after scoring against Osasuna at the Sanatiago Bernabeu.
STORY HIGHLIGHTS

(CNN) -- Cristiano Ronaldo scored two stunning goals as Real Madrid closed the gap at the top of La Liga with a comfortable 4-0 victory over Osasuna at the Santiago Bernabeu on Saturday.

The Portuguese opened the scoring after six minutes with a 25-yard strike before adding a similarly spectacular second just after half-time.

Headers from Sergio Ramos and Daniel Carvajal added gloss to the victory which moves Real into second place above Barcelona and three points behind league leaders Atletico Madrid.

Atletico can stretch their lead at the top of the table back to six points if they win away to Valencia on Sunday while Barcelona can go above Carlo Ancelotti's men themselves with victory at Villareal.

Both Atleti and Barca will have played a game more than Real by the time the weekend's fixtures are complete, however.

On the performance of his side and particularly Ronaldo who has suffered with injury in recent weeks, Real coach, Ancelotti, told reporters after the game that "everything went well for Cristiano and for all of the players. There were no problems and some have had a rest.

"The match was good, not high intensity, and Cristiano showed he is fine," he added.

Real are next in action on Tuesday as they look to protect their slender one goal lead over Bayern Munich in the second leg of the Champions League semifinal.

The reigning German and European champions, Bayern, were in fine fettle themselves on Saturday as they bounced back from first-leg defeat against Real to record a comfortable 5-2 victory over Werder Bremen at the Allianz Arena.

Elsewhere in Germany, Borussia Dortmund ensured they would finish the Bundesliga season in second position after twice coming from behind to draw with fourth placed Bayer Leverkusen.

Goals from Lars Bender and Gonzalo Castro had twice given Champions League chasing Leverkusen the lead but Oliver Kirch and Marco Reus hit back for Dortmund both times.

Fifth placed Wolfsburg missed the opportunity to leapfrog Leverkusen after they could only draw 2-2 at home to Freiburg.

Napoli close in on third

In Italy, Napoli drew 0-0 away to fifth-placed Inter Milan meaning one more victory will guarantee Rafa Benitez's side a spot in next season's Champions League qualifying stages.

The Neapolitans currently sit in third place in the Serie A table, eight ahead of fourth-placed Fiorentina who earlier won 3-0 away to relegation threatened Bologna.

Two goals from Juan Cuadrado and another from Josip Ilicic were enough for the Viola who now look likely to claim a Europa League place unless Napoli suffers a dramatic collapse.

In France, meanwhile, two goals from Dimitar Berbatov helped second place Monaco to victory at AC Ajaccio, ensuring Paris Saint Germain will have to wait until at least tomorrow to claim the Ligue 1 title.

The Bulgarian scored his seventh and eight goals for the club since signing on loan from Fulham in January as Claudio Ranieri's men ran out comfortable 4-1 winners.

With a seven-point lead atop the table and only four games remaining, PSG are unlikely to be denied a second successive league crown.

In winning at Ajaccio, however, Monaco moved 11 points clear of third-placed Lille, all but confirming automatic qualification to the group stages of next seasons Champion's League.