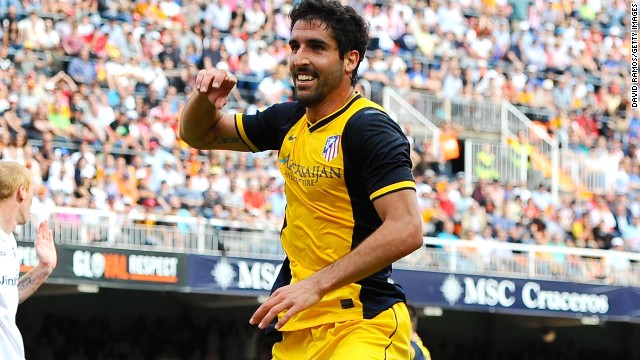 Raul Garcia scored the only goal of the game in Atletico Madrid's 1-0 win at Valencia.
STORY HIGHLIGHTS

(CNN) -- It remains advantage Los Rojiblancos in the race for the La Liga title as Atletico Madrid battled to a 1-0 away win at Valencia to lead by four points by the end of Sunday's program.

Barcelona moved up to second with a 3-2 win at Villarreal in the late match, their first since the death of former coach Tito Vilanova this week.

Barca trailed to a Ruben Cani goal just before halftime and fell further behind when Manuel Trigueros scored for the home side on 55 minutes.

But a pair of Villarreal own goals from Gabriel Paulista and Mateo Musacchio allowed the Catalan giants to level before Lionel Messi grabbed the winner seven minutes from time.

Real Madrid, who beat Osasuna 4-0 Saturday, are six points adrift but have a game in hand on both their rival.

But Atletico will clinch La Liga for the first time in 18 years with two wins from their remaining three game, the last of which is against Barcelona

Atletico were able to register a ninth straight win in their relentless march to the title with a goal from Raul Garcia just before halftime proving the difference in the Mestella.

"We wanted to win for us and for all the people who've come to Valencia. Their support is essential" #AupaAtleti, the scorer tweeted after the match.

Both teams are involved in European competition next week, with Atletico fielding a strong team despite a Champions League semifinal second leg against Chelsea on Wednesday.

Valencia, who are looking to overhaul a 2-0 deficit to Sevilla at the same stage of the Europa League, were also nearly at full strength and made a bright start against the league leaders.

Atletico's David Villa came close to scoring against his old club before the visitors made the breakthrough as Gabi picked out Garcia who scored with a deft header.

Atletico's leading scorer Diego Costa had two good chances to make the game safe for Diego Simeone's men in the second half but they held out for a vital three points although losing Juanfran to a red card in stoppage time.

Read: Chelsea v PSG: It's not all about money

The were held to a 1-1 draw by at struggling Sochaux to go eight points clear of Monaco with three games remaining.

Uruguay star Edinson Cavani put PSG ahead on 24 minutes but an own goal from Thiago Silva after the break leveled the affair.

Sochaux remained four points from safety in 18th place despite the battling draw.