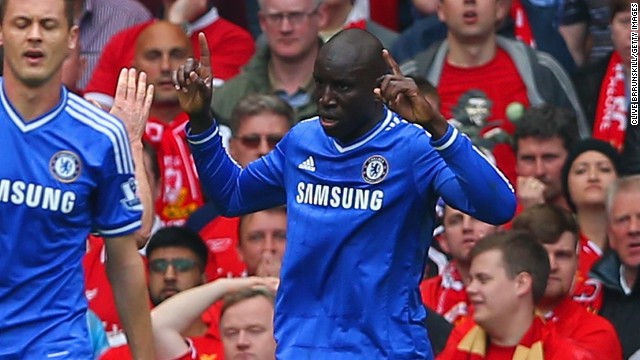 (CNN) -- Goals at the end of each half from Demba Ba and Willian threw an enthralling EPL title race wide open as Chelsea secured a 2-0 win at leaders Liverpool Sunday.

The defeat ended a run of 11 straight wins for Liverpool, who were frustrated by the tactical wiles of Jose Mourinho's visitors, to leave their bid for a first English championship in 24 years in the balance.

Chelsea have closed to within two points but it is Manchester City who have emerged as the most likely challengers after a 2-0 win at Crystal Palace in the late game Sunday.

First half goals from Edin Dzeko and Yaya Toure gave City a comfortable victory and the knowledge that if can win their final three games they will repeat their 2012 EPL title triumph.

City still remained in third place, three points adrift, but have a game in hand over the top two.

Moyes out at Manchester United

Earlier, Chelsea, who held Atletico Madrid goalless in the first leg of their Champions League semifinal in midweek, made seven changes from that starting line-up, but it scarcely showed in a resilient display.

They went ahead just before halftime as Senegal star Ba continued his recent run of crucial goals after a slip by Liverpool captain Steven Gerrard.

Liverpool, who have scored a leading 96 goals in the EPL this season, were restricted to few chances with Luis Suarez unable to add to his personal tally of 30.

His second half effort was saved by Mark Schwarzer and the veteran Australian goalkeeper also kept out shots from Joe Allen and Gerrard.

Desperately pushing forward at the end, Chelsea were caught by a sucker punch as substitute Fernando Torres broke clear and unselfishly played in Willian for the clinching second in injury time.

"A magnificent performance from all my team," was the verdict of Mourinho, who will be hoping they can repeat the success when they entertain Atletico in the second leg Wednesday.

His Liverpool counterpart Brendan Rodgers was less than impressed by Chelsea's stifling tactics.

"I think there were two buses parked today, never mind one," he told Sky Sports. "It was like a back six with three midfield players in front of that. That's 10, with the goalkeeper, for 90 consistently behind the ball.

"It was clear that they'd come certainly not wanting to win the game, with the time-wasting and whatnot," he added.

Read: Giggs off the flying start as Man Utd boss

Mourinho has received a further boost, which he revealed during his post-match press conference.

Key defender John Terry, who looked set for a long absence after injuring his ankle in the Atletico draw, may be fit to make an earlier return.

"He has a chance," Mourinho said. "Let's see tomorrow and after tomorrow. After the match against Atletico, I said no chance. In this moment, I say maybe."

Earlier Sunday, Sunderland, whose shock victory last week at Chelsea so dented the title hopes of Mourinho's men, carried on that superb form with a 4-0 thrashing of fellow strugglers Cardiff.

Conor Wickham scored a double, his fifth goal in three games, as Sunderland moved out of the bottom three but left their Welsh opponents in deep relegation trouble.