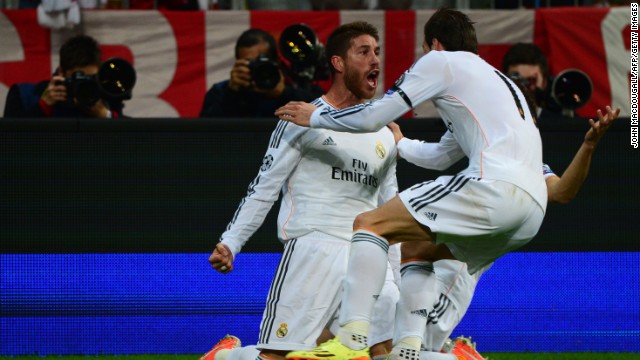 Sergio Ramos was the unlikely hero for Real Madrid, scoring twice in four minutes during a frantic first half. Ramos headed home Luka Modric's corner on 16 minutes to give his side a 1-0 lead on the night, 2-0 on aggregate. 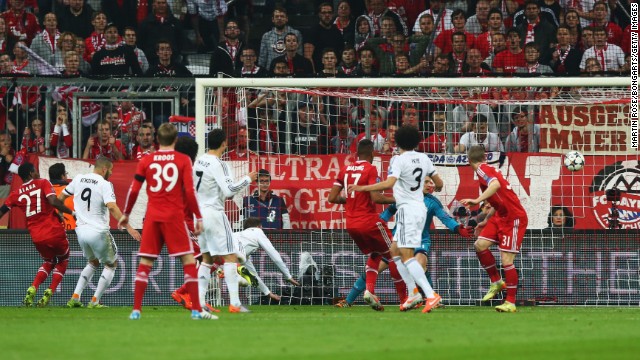 Ramos claimed his second soon after, finding space inside the Bayern penalty area to plant his header firmly past Manuel Neuer from close range. 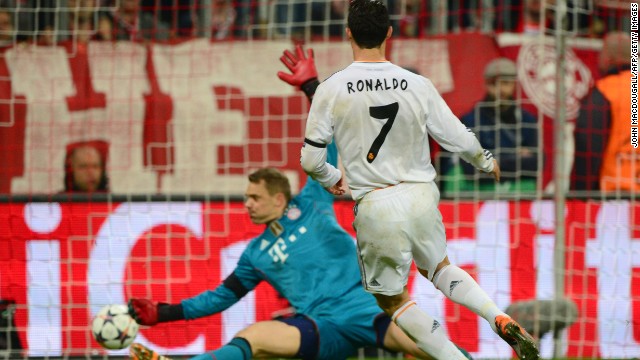 Cristiano Ronaldo added a third 11 minutes before the interval after finishing off a sweeping move involving Karim Benzema and Gareth Bale. 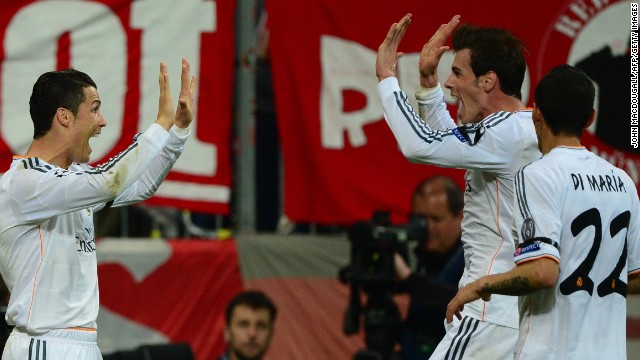 Ronaldo has scored 16 goals in this season's Champions League competition -- the highest ever recorded. 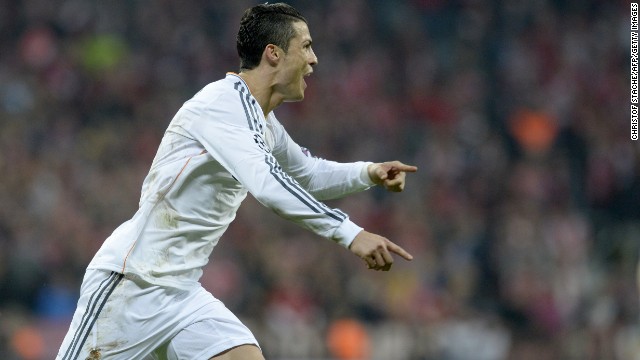 Ronaldo scored his second of the game late on with a free-kick which flew beneath the Bayern wall and capped an astonishing 4-0 win on the night, a 5-0 aggregate victory.
HIDE CAPTION
Rampant Ramos
Easy pickings
Roaming Ronaldo
Goal machine
Final word
<<
<

(CNN) -- If Real Madrid does fail in pursuit of 'La Decima' then at least it will always have 'the decimation'.

On a night where the champion was dethroned in brutal fashion, Real flexed its muscles and showed it is ready to end the long wait for a 10th European triumph.

A stunning 4-0 success in Munich completed a 5-0 aggregate victory and paved the way for a final clash with either city rival Atletico or former manager Jose Mourinho and his Chelsea side.

Not since 2002 has Real, Europe's most successful club, managed to acquire the continent's top club prize.

No team has ever retained the Champions League title and Bayern Munich, so highly fancied once again this year, rarely looked like repeating its glorious triumph of last season.

Trailing 1-0 from the first leg in Madrid, Bayern endured a nightmare first half as Real produced an astonishing performance to lead 3-0 at the interval.

Sergio Ramos scored twice in four minutes before Cristiano Ronaldo rounded off a fine counter attack to claim his 15th goal of this season's competition -- a new Champions League record.

Ronaldo added a fourth late on with a free-kick to cap a remarkable performance to make it 51 goals in 50 Champions League career appearances.

"It's a fantastic result for us," winger Gareth Bale told ITV.

"We've been working hard, got our tactics right, played well and deserved the win.

"We are happy to be in the final but still have one game to go. Everybody put in 100% -- no matter who it was, they put in a performance.

"This is why I wanted to come to the biggest club in the world - to win trophies in massive games.

"We still haven't won it yet, we have a difficult game in the final whoever it may be but I'm looking forward to it."

Bale will remember this occasion for many a year to come -- but for most of those who were packed inside the Allianz Arena, this was a night to forget.

Great win, a dream come true to play for @realmadrid in the #ChampionsLeagueFinal #HalaMadrid

This was a painful and merciless destruction of a Bayern side which had looked unbeatable earlier in the season.

While Real played with the belief and purpose of champions, Bayern appeared cumbersome, disjointed and a shadow of the side which had waltzed to last season's title.

But for all of Bayern's deficiencies, it would be churlish to take away from the achievement of Carlo Ancelotti's side.

Bayern coach Pep Guardiola had spent the past few days instilling belief and confidence into his players.

Much of that had evaporated within the opening 20 minutes as Real's pace and power tore through the home defense.

Labored and predictable in possession and embarrassingly open in midfield, Bayern allowed Real to use the likes of Ronaldo and Bale at every opportunity.

Yet, for all the attacking talent at its disposal, it was through an old-fashioned set-piece routine which Real forged ahead.

Shocked and stunned by conceding, the home team was then hit with a real knockout blow four minutes later.

Again it was Ramos who found the net, producing a fine header to guide Angel Di Maria's cross into the far corner.

For Ramos, this was sweet revenge.

Two years ago, the Spain international missed from the penalty spot as Real was defeated on spot kicks by Bayern in the last four.

This time, it was he who was dancing with delight as Bayern heads began to drop.

Real, defeated in its past three semifinal appearances, began to play with the style and swagger long associated with the club from the Spanish capital.

And with 11 minutes of the first half remaining, it produced a breathtaking move to claim a third.

Karim Benzema released Bale and the Welshman ran half the length of the field before picking out Ronaldo to coolly fire home.

Needing five goals to qualify for the final, Bayern's case looked hopeless and so it proved.

Real, happy to sit and defend deep, was rarely troubled and only a fine reflex save by Neuer prevented Fabio Coentrao from adding a fourth.

Bayern enjoyed plenty of possession after the interval but Iker Casillas in the Real goal was rarely tested.

In the end, it was left to Ronaldo to have the final word.

With just over a minute of normal time remaining, the Portuguese star unleashed a low free-kick which flew past Neuer to add further gloss.

"La Decima" is within touching distance -- only Atletico or a certain Mr Mourinho can stop Real now.