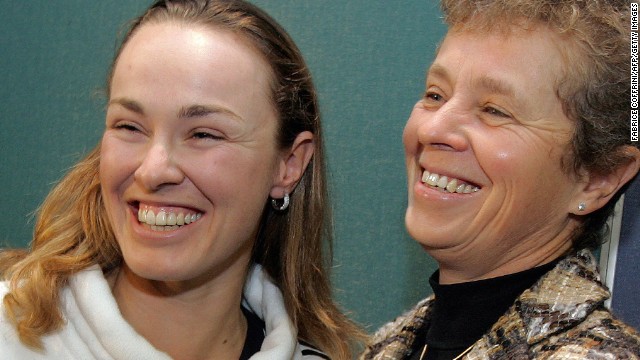 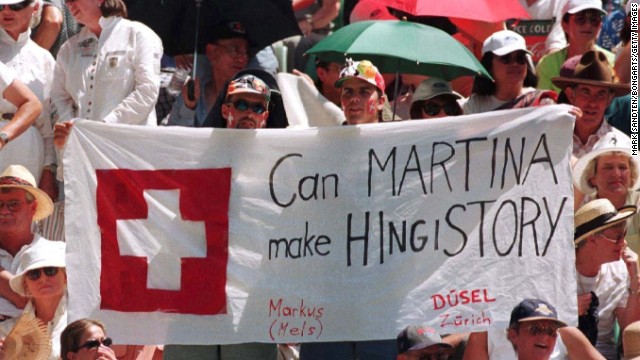 Hingis had a prolific early career. Her fans at the 1997 Australian Open ask whether the 16-year-old "Swiss Miss" can make history by becoming the youngest grand slam winner... 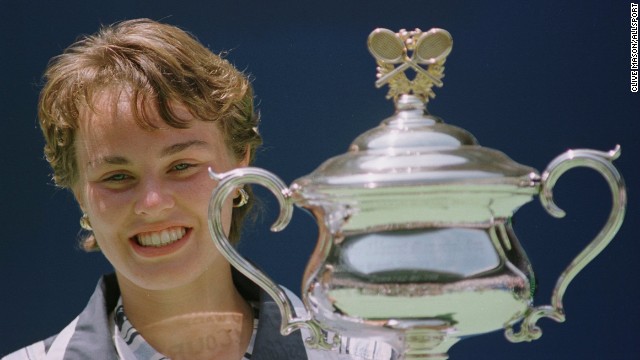 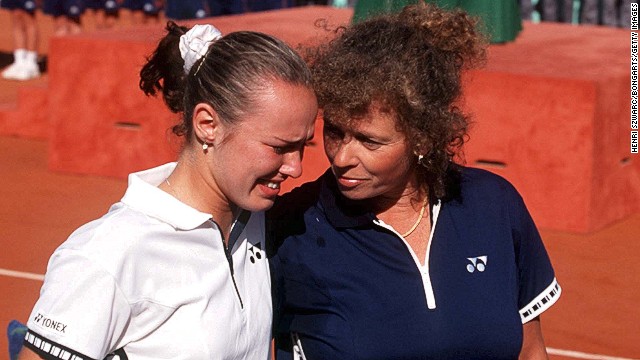 Hingis is comforted by her mom after losing a turbulent French Open in 1999 to Germany's Steffi Graf. The French is the only grand slam Hingis failed to win. 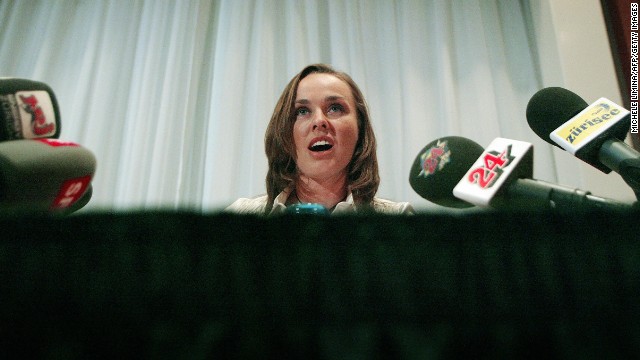 Hingis won five grand slam singles titles in her career but injuries -- and allegations over a failed drug test -- prompt the Swiss star to announce her retirement in 2007. 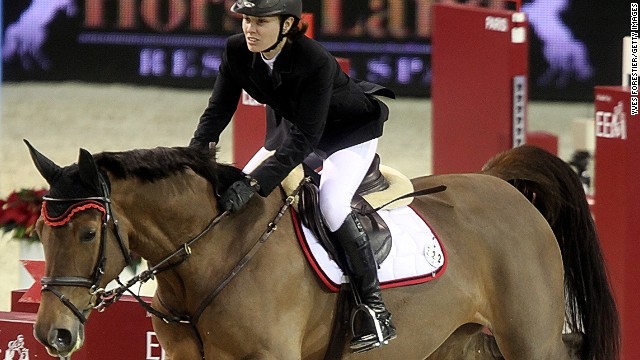 More time away from tennis allows Hings to pursue her lifelong hobby of horse riding. 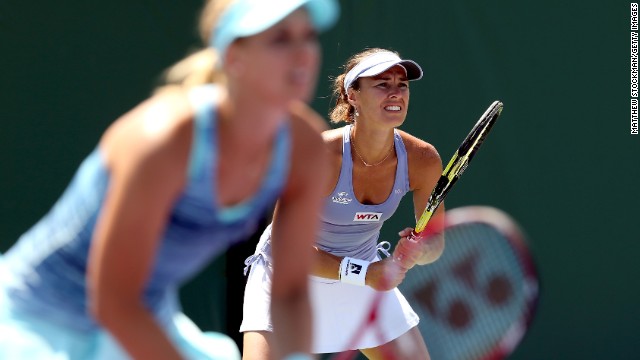 But in 2013 Hingis makes another surprise return to tennis, exclusively playing doubles. In 2014, she is partnering Germany's Sabine Lisicki, who she also happens to be coaching. 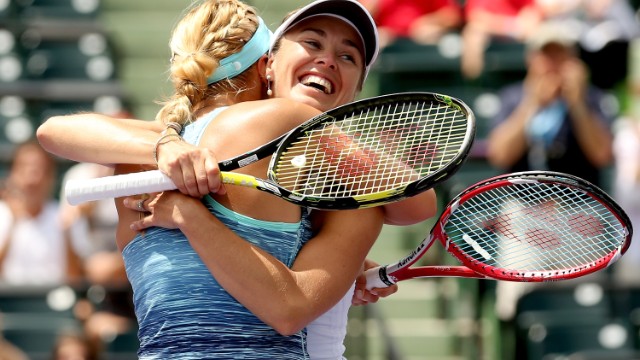 Coached for much of her career by her mom Melanie Molitor -- said to have named her daughter after another tennis icon, Martina Navratilova -- the five-time grand slam champion is using her mother's advice both on and off the court.

But the doubles victory was just a diversion for Hingis, who is also borrowing some inspiration from her mom with a blossoming career as a tennis coach.

"I think a lot more about my mum now," Hingis tells CNN's Open Court with a flash of her trademark smile.

It's never easy to coach anybody. She's the best. She really helps to coach and to mentor. She has so much more experience.
Martina Hingis

"It's never easy to coach anybody. She's the best. She really helps to coach and to mentor. She has so much more experience."

Hingis is presiding over a brood of young players on the clay courts of her new tennis center at Barcelona's Real Club de Polo.

As the juniors run drills round the red clay, her mom drops in to lend a hand and is soon on court with a pile of tennis balls heaped onto her racquet, ready for business.

"The goal is to grow slowly," says Hingis of the new project, which she started in collaboration with former top-10 player Felix Mantilla and Karim Perona, who coaches Tommy Robredo and Flavia Pennetta.

"It's a small, elite group of pros but in the future we want to work with kids, amateurs, veterans all the players. Anyone who wants to come here and learn is welcome."

Hingis' caliber as a coach is growing. She has worked with Russian world No.25 Anastasia Pavlyuchenkova and is now coaching the 2013 Wimbledon finalist Lisicki.

In fact it was Lisicki's idea to get Hingis to double up her role as coach and playing partner.

"I was practicing with Sabine and coaching her when she asked about playing doubles," Hingis explained.

"I was like 'wow, that's a bit unexpected' but we talked about it last year at Wimbledon when she did so well. It's nice that I can be the coach and playing partner of Sabine, it's kind of killing two flies with the same thing!

To win an event like this after a seven-year absence I didn't expect it! Standing there as a champion again was a really nice feeling. You feel invincible again when you win.
Martina Hingis

"To win an event like this after a seven-year absence I didn't expect it! Standing there as a champion again was a really nice feeling. You feel invincible again when you win.

"I really enjoy the competition but I definitely wouldn't do it if I got knocked out in the first or second round again."

Hingis is understandably wary about making a habit of a comeback on the court.

A glittering early career saw a 16-year-old Hingis set records as the youngest world No.1 and, when she won the 1997 Australian Open, as the youngest player to win a grand slam in the 20th Century.

After two more wins in Australia and the Wimbledon and U.S. Open crowns -- as well as nine grand slam doubles titles -- the "Swiss Miss" retired from tennis in 2002, plagued with injuries at the age of 22.

Four years later, Hingis returned to win a first mixed doubles title at the Australian Open and six more singles titles, only to retire again at the end of 2007.

"Playing and winning was normal and natural," reflected Hingis, who returned to play doubles with Daniela Hantuchova for a brief spell last season.

"You didn't have time to enjoy the moment because there was always the next tournament, the next challenge, the next opponent.

"I have more time now to enjoy it and look back at the memories. When they talk through my career I think 'oh yeah I wasn't so bad!'

"Everything I achieved as a 16, 17, and 18-year-old teenager, I was going through all these difficult times, rebellion and I still have all these unbelievable victories, so I don't have any regrets."

Even in the twilight of her career, Hingis' deft, tactical game may still be capable of winning trophies but she is also learning that there is success to savor with a seat in the players' box too.

"When a player improves, does the right thing that I'm asking for, it's like a small victory," Hingis said.

"It's a challenge to make the players better. Everything that I do now it's a lot more thought through.

"Now I try and learn as teacher, as a coach, it's like learning again."

Tennis has not only brought Hingis full circle, and closer to her mother through coaching, it has also helped fuel her passion away from game.

"I got my first horse when I was 14 and I bought her with my first prize money," explained Hingis, an accomplished equestrian.

"It was something that I had for myself and didn't have to be perfect at! With tennis you have to put it in the white lines and you want to win matches but with horses I didn't have the same pressure.

"Tennis was my job, horses were my passion and I wanted to keep it that way."

Her current steed is now stabled at Barcelona's polo club alongside the 40 courts of her new tennis center.

Under Barcelona's brilliant blue skies, it seems Hingis has found the perfect balance between work and pleasure.

Is Belinda Bencic the next Martina Hingis?