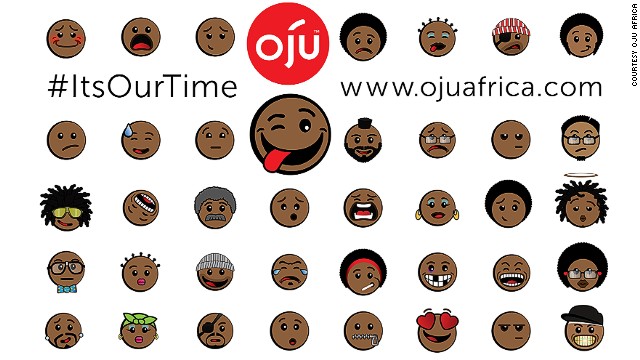 The first ever Afro emoticons have recently been launched by a Mauritius-based app company. Called "Oju," which translates to "faces" in the Nigerian Yoruba language, the icons are meant to tackle a lack of racial diversity in mobile characters. 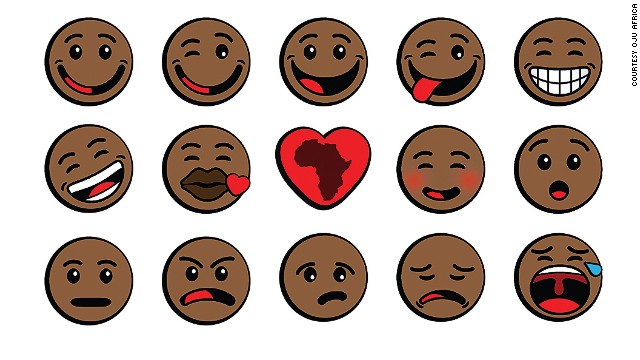 The emoticons have been designed to be used across all Android platforms and will shortly be released on iOS. 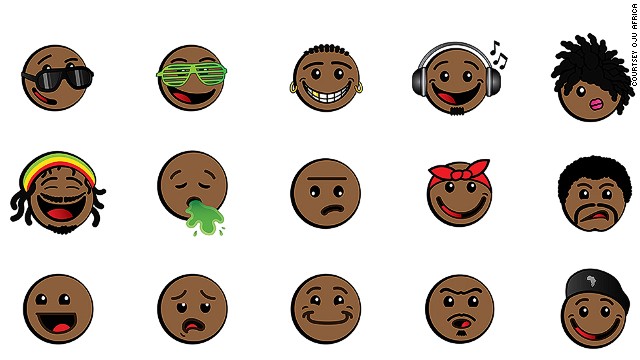 The move came after celebrities such as Miley Cyrus and Tahj Mowry petitioned Apple to update its emoji characters. Oju Africa had been working on their version since 2012, but decided to release them early after the hashtag #EmojiEthnicityUpdate started trending on Twitter. 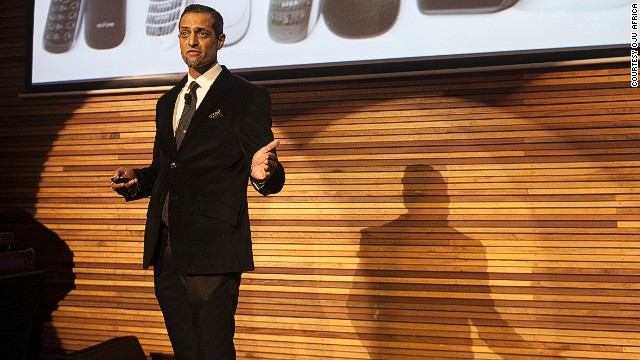 CEO Alpesh Patel, pictured above, told CNN: "It's very important for us, as a small African company, to make it known to the world that we were the first to do it." 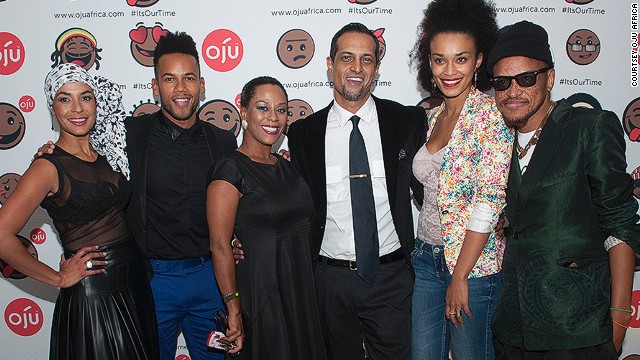 Oju Africa was officially launched at event in Johannesburg, South Africa, shown above, and has so far had 16,000 downloads, mainly from the U.S.

Patel says that he wants Oju to become an iconic African logo, in the manner of Mickey Mouse or Hello Kitty : "If you look at the main logo with the tongue sticking out, he's a cheeky, very friendly, cool African character that also works in digital by the smilie, but also in non-digital by traditional character licensing." Patel wants to see it stamped on cereal packers, nappies and even made into toys. 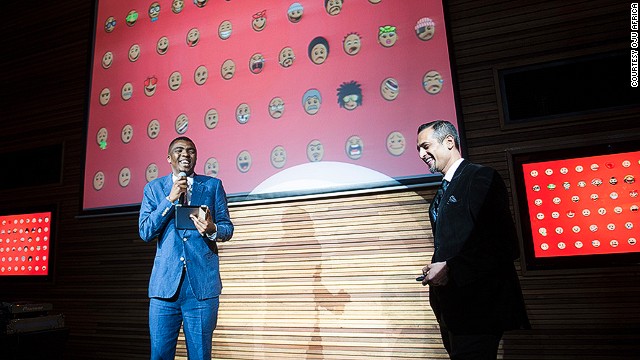 He adds that the company wanted to include Africa in all digital trends, and show that innovation is not something that only happens in the West: "With the Oju Africa emoticons, we are sharing African soul, funk and unparalleled smiles with the world," he explains.
HIDE CAPTION
Driving diversity
Leaping ahead
The power of social
Beating competition
Going across borders
Creating a brand
Changing the narrative
<<
<

(CNN) -- As in most aspects of life, timing in business is essential.

About one month ago, following complaints by celebrities like Miley Cyrus and Tahj Mowry over a lack a racial diversity in Apple's emojis (the cartoon-like icons used to spruce up text messages), a company executive told MTV that the tech giant was working to update its set of characters.

The news quickly had Twitter buzzing as people joined the #EmojiEthnicityUpdate discussions -- but that wasn't the end of the story.

Without wasting any time, a Mauritius-based app company called Oju Africa announced a few hours later that it had already tackled the lack of racial diversity by introducing its own set of Afro emoticons on Google Play Store.

RT if you think there needs to be an #emojiethnicityupdate

The company said it had been working on the icons since late 2012 and was planning to officially launch them on April 10. Yet, the social media hype after Apple's response prompted them to speed up their release date -- trumping market-leading companies in the process.

"Within a couple of hours of seeing that, we put our press release out and we already claimed ownership -- that we have actually developed this already," chief executive Alpesh Patel told CNN. "It's very important for us, as a small African company, to make it known to the world that we were the first to do it."

The emoticons are designed to work on all Android platforms, and will shortly be available on iOS. The company, a division of mobile devices brand Mi-Fone, says that so far there've been more than 16,000 downloads, the majority of which have come from the United States.

CNN's African Start-Up caught up with Ugandan-born Patel to find out what's been the response to the Afro emoticons, his plans for the future and why he wants to see Oju on the packet of cereal boxes.

CNN: Why did you decide to launch the Afro emoticons?

Alpesh Patel: It's something that we thought about since late 2012. We decided to do it because of our core business, Mi-Fone. We had a look at the offerings in the market and said what can we do to make our phones more African; what can we do with the software, because all of the phones are kind of looking the same now.

We actually looked at it and said "you know what, there's actually a lack of black smilies" -- every phone that we looked at had yellow smilies so we said "why can't we have some smilies, or some emoticons, that are more relevant to the people that we supply to?"

The reason we launched it three weeks ago is because of this petition from Miley Cyrus and MTV -- petition to Apple CEO complaining about the lack of racially diverse emoticons and Apple said "yes, we're going to look into it." But within a couple of hours of seeing that, we put our press release out and already claimed ownership -- that we have actually developed this already. We're the first ones in the world to do it and people should work with us and use our emoticons because they represent people of color in a very nice way, they're not derogatory at all. 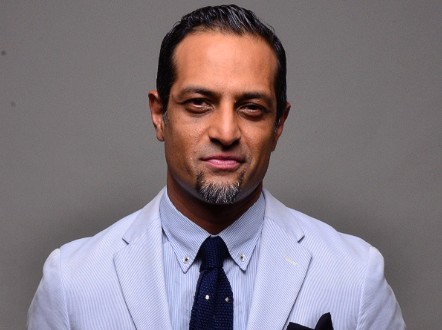 CNN: How do you feel about beating tech giants?

AP: I don't think really it's about beating anyone to it -- I just think that it's very important for us as, a small African company, to make it known to the world that we were the first to do it. Big companies work with small companies all the time. We would like the big companies to work with us.

We've developed something very unique, very innovative. It's been a big hit over the last three weeks and we feel that it will really help lift African innovation into the global audience because really not much things come out of Africa which you can sell overseas, most of the stuff will start from overseas and into Africa.

We feel that it will really help lift African innovation into the global audience.
Alpesh Patel, Oju Africa

CNN: Are you afraid your emoticons might fall out of favor when bigger companies release their own icons?

AP: No, the big companies have the muscle anyway, they'll do whatever they want to do. At the end of the day, we will just continue with what we're doing, we don't have those budgets and resources like they do so really today it is about who makes the loudest noise, but at least we were the ones to make the noise first.

We're just going to keep on saying to people, "why do you want to actually go and develop and waste money when you can go right now to the Google Play Store in Android and download the Oju Africa app for free?" There's no need to go and reinvent the wheel -- it's already available and it's out of Africa where it's even better than someone in London or New York doing this. We've actually done this in Africa.

CNN: How many downloads have you had so far?

AP: We've had 16,000 downloads and most of them are from the U.S. -- we've had downloads from very seasoned markets and they've looked at it and said "hang on a minute, wow, this is a really cool innovation but it's coming from Africa." You know innovation is not something that belongs to the West, so we're very happy with what's happened but obviously we've got a long way to go.

CNN: Do you think that there should be more cartoon characters from Africa?

Today Africa does not have its own Mickey Mouse, does not have its own Hello Kitty, there is no African character brand, and we said "hang on minute, we're sitting on something that has huge potential worldwide. I mean if you can imagine an Oju cereal packet like Coco Pops with Oju collectibles, if you can imagine Oju nappies for babies, an Oju chocolate bar, an Oju toy -- the possibilities are endless and this is what I believe really will help lift Africa.

CNN: What is the role of mobile in helping in the development of African countries?

AP: Mobile is basically what makes Africa go round today, what makes Africa work today. We never had any fixed infrastructure so Africa has come from nothing to wireless and in that process we've been able to develop some superior networks in Africa compared to the ones in the western world.

The mobile phone has become central to everyone's life -- contrary to popular belief the world is not round anymore, it's actually a four-inch screen for most mass market African consumers because this is where they're going to do all their business.

Milena Veselinovic contributed to this report.