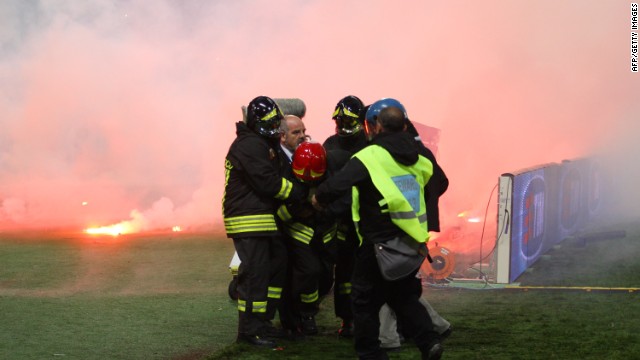 A firefighter is injured by a flare before the Italian Cup Final. 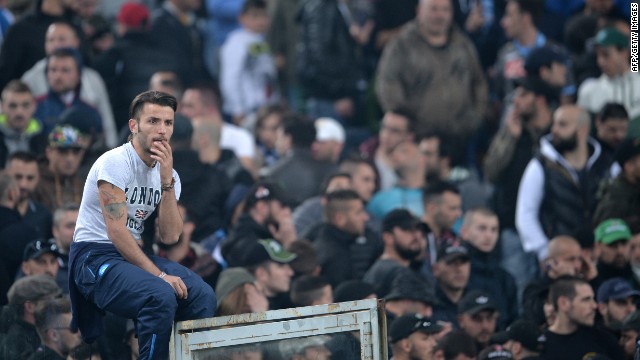 The start of the final between Napoli and Fiorentina was delayed after violence followed local reports that several fans had been shot. 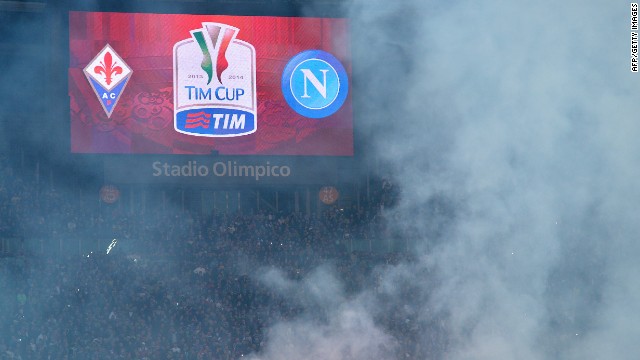 Smoke rises over Rome's Olympic Stadium before the Italian Cup Final. Napoli's ultras pelted the pitch with flares when news of the violence spread. 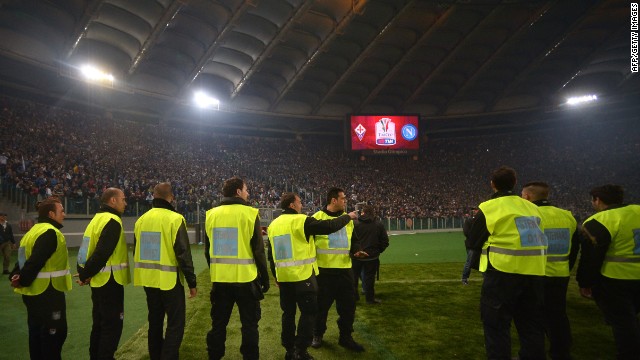 After Napoli players remonstrated with the ultras, the game began 45 minutes late. 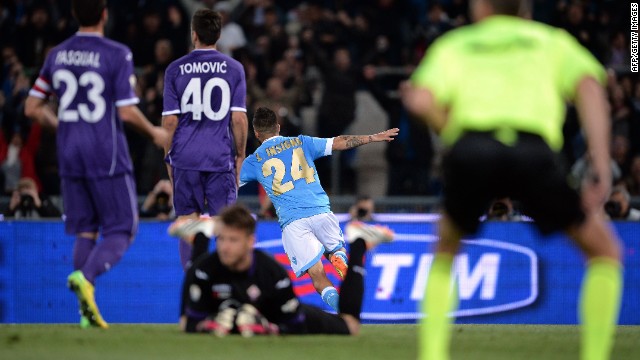 Napoli quickly go into a two goal lead thanks to Lorenzo Insigne, who scored both. 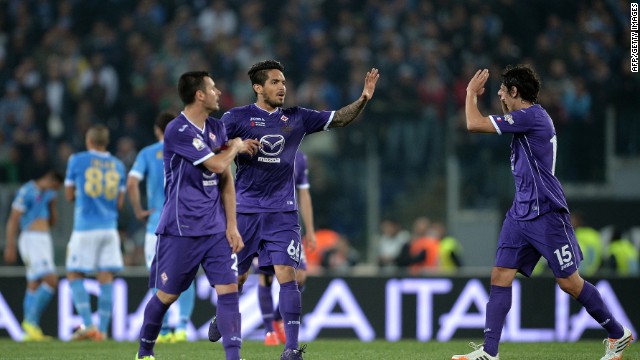 But the first half finished 2-1 after Juan Manuel Vargas kept Fiorentina in the tie. 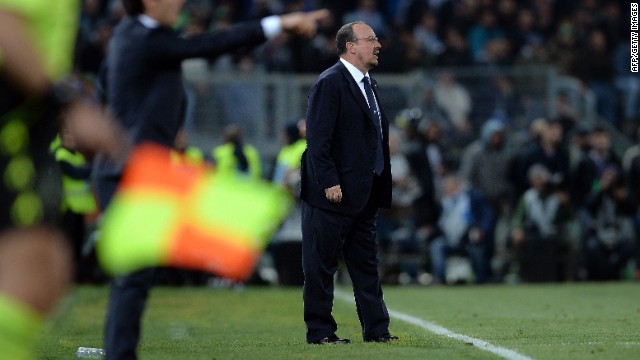 (CNN) -- Three Napoli fans received hospital treatment and one remains in a critical condition Sunday after violence marred the Italian Cup final between Napoli and Fiorentina in Rome.

Reports from domestic news agency ANSA said three Napoli supporters suffered gunshot wounds in clashes before Saturday's match in the Olympic stadium, while another from Rome was hospitalized with injuries.

The condition of one of the Napoli fans, a 30-year-old, remained "critical but stable" after an operation to remove a bullet from near his spinal cord, doctors said.

There have been conflicting reports of exactly who was responsible for the incidents and who fired the shots, but with almost 30,000 fans from each club arriving in a capital already boasting two other clubs, Roma and Lazio, the potential for violence was high and sadly this proved the case.

After news of the pre-match shootings filtered through to Napoli's fans in the Curva Nord (North End), the match was delayed and no official reason given.

An uneasy stand off followed between the authorities and Napoli's ultras -- the club's hardcore, organized fan group -- who pelted the pitch with burning flares as the match was initially suspended.

At one point Napoli's Slovakian striker Marek Hamsik appeared to remonstrate with the ultras in a bid to calm the situation down before being ushered away.

"These incidents are simply unacceptable," said Maurizio Beretta, the president of Lega Serie A, according to AFP.

"We appeal to the fans who are here for the final to treat it as it should be -- an evening of sport and football and not one that should give rise to episodes of violence."

"A football match shouldn't be about battles between two sets of supporters," said Italian Senate president Pietro Grosso, as quoted by AFP.

"We're here to see a final, to enjoy the game in a festive and sporting atmosphere. I'm saddened to see that this kind of thing is still going on."

After the delay a fine game of football finally broke out.

Napoli's players, visibly effected by the atmosphere surrounding the game, raced out of the blocks and into a two goal lead.

Twenty two year old Italy international Lorenzo Insigne, who was born and raised in Napoli, scored twice and could have had a hat trick.

But Fiorentina fought back with Peruvian Juan Manuel Vargas and were then denied what appeared to be a legitimate goal that was called offside right before half time.

The second half was a much cagier affair as Napoli coach Rafa Benitez, looking for a trophy in his first season at the club, tried to close the game down.

Everything had gone to plan for Benitez and Napoli but a second yellow card for Swiss international Gokhan Inler with just over 10 minutes to go set of a frenetic end to the match.

But Napoli broke away on the counter attack and Belgian international Dries Mertens made it 3-1, securing the club's fifth Coppa Italia success.

Meanwhile, in Spain, Barcelona's hopes of defending the La Liga title suffered a serious setback after conceding an injury time equalizer against Getafe.

Lionel Messi and Alexis Sanchez had twice given Barcelona the lead. But on both occasions Angel Lafita scored, his second with only minutes remaining to make it 2-2.

There had been emotional scenes before the game at Camp Nou as a gigantic banner was hoisted to honor Tito Vilanova, the club's former coach who died last week of throat cancer.

Atletico play Barcelona at the Camp Nou in the last game of the season in what still be a title decider.