A week in eastern Ukraine

Editor's note: Nick Paton Walsh is an Emmy award-winning senior international correspondent for CNN International. He is currently covering the crisis in Ukraine. Follow Nick on Twitter at @npwcnn.

Slovyansk, Ukraine (CNN) -- CNN's Nick Paton Walsh and his team traveled to Slovyansk, in the north of the Donetsk region, on April 26. He has filed daily reports from the area as the crisis in eastern Ukraine unfolds. 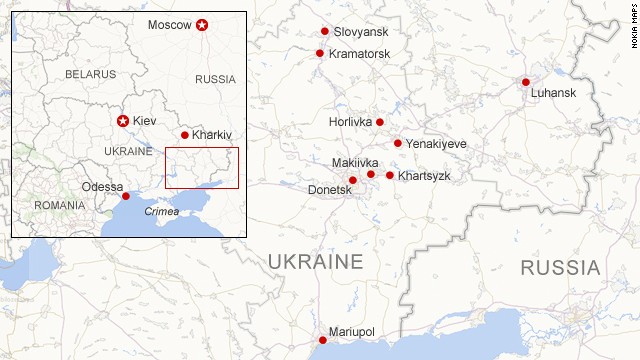 Where unrest has occurred in E. Ukraine

Where unrest has occurred in E. Ukraine

This is their journey throughout the week.

On Saturday, April 26, the team went to the funeral of Alexander Lubenets, a young man who was killed at a separatist checkpoint at Kombikormovyi on the outskirts of Slovyansk. There was grief and anger at the central government in Kiev, which people say has turned against them.

The team attended a bizarre news conference given -- under duress -- by captured military observers from the Organization for Security and Co-operation in Europe and the self-appointed mayor of Slovyansk, Vyacheslav Ponomarev. The military observers would end up being held for more than a week, before they were freed with the intervention of an envoy of Vladimir Putin.

The team traveled south of Slovyansk to the town of Kostyantinivka after reports that separatists had launched their latest move there. By now, the takeover of key buildings by pro-Russian militia has developed a familiar, smooth routine. Locals now come out to have their photos taken with the gunmen.

The team followed up the story of Alexander Lubenets, talking to his father, a former Soviet soldier, in the nearby village of Khrestysche. "We are all fighting for our land," the father said. On the other side of this conflict, there are gruesome deaths, too. Three bodies found dumped in a river -- all three, investigators say, bear torture marks from knives.

The team talked to the men controlling the checkpoint at Kombikormovyi, where Lubenets was killed. Early that morning, the men had seen Ukrainian armor roll toward them again, only to pull back. At another checkpoint not far away, the team saw heavier armed new arrivals for the first time. Their equipment was closer to what they had seen the previous month in Crimea.

At this stage, more than a week after Kiev had promised a stepped-up campaign against the separatists, the team has seen little evidence of it.

The separatists now running Slovyansk seem to have firmed up plans to hold a referendum, which could pave the way for the eastern regions to break away from Ukraine.

Inside the local Communist Party offices, under the gaze of Comrade Lenin, a local party official said she is preparing voter lists ahead of the poll. The team also returned to the checkpoint at Kombikormovyi, where they found that the militia is pulling back in anticipation of another Ukrainian advance.

Ukrainian troops made their first serious move to reassert control over Slovyansk. Paton Walsh reported from the outlying village of Andreevka, where Ukrainian APCs found their way blocked by angry locals waving flags of the self-declared Donetsk People's Republic.

The team also saw discarded shoulder-held missile launchers, of the type suspected of bringing down two Ukrainian helicopters earlier in the day.

The team reported from Kramatorsk, to the south of Slovyansk. Early morning reports suggest that the Ukrainians have moved in. Announcements coming from Kiev claimed that a number of key locations have been regained from separatists. Though it is clear that Ukrainian forces have passed through the town, the team found no evidence of a sustained presence there. They did, however, hear rare voices of disdain for the actions of the pro-Russian forces.