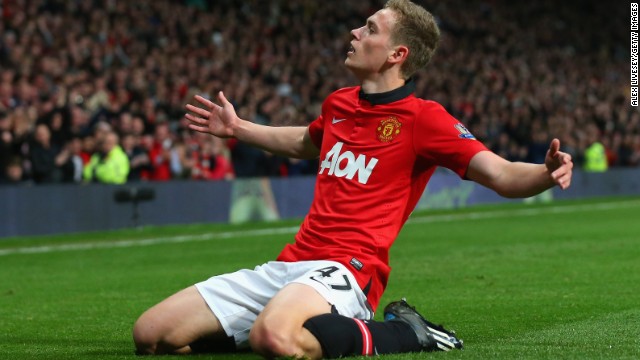 (CNN) -- On the night where one of the club's greats may have played his final game, a new star shone brightly.

Ryan Giggs may have appeared in the famous red shirt for the last time in his illustrious career although the 40-year-old has yet to confirm his retirement.

Giggs, who has presided over the team as interim manager since the sacking of David Moyes, looked emotional as he spoke to supporters following the 3-1 victory against Hull City.

Last ever appearance at Old Trafford as a Manchester United player? Ryan Giggs brings himself on with 20 mins to go pic.twitter.com/5SF7J3JPFo

It was a night when Giggs gave youth its chance and was repaid handsomely as 18-year-old James Wilson gave a glimpse of the future.

Wilson, who has progressed through the ranks at Old Trafford, scored twice on his debut -- not bad for a player who wasn't even born when Giggs won his first title with United.

Giggs' future is unclear with just one match of the season remaining -- and he looked to be feeling the emotion during his short speech.

"I'd just like to say a big thank you from all the players and all the staff for your support this year," Giggs said as he addressed the crowd at the end of the game.

"We know it's been tough this season and over the years we've been spoiled with the success we've had, but you've always supported the team and the staff, and I'm sure in the coming years we'll bring you more success.

Giggs, the most decorated player in the history of British football, has won 13 league titles with United, two Champions League crowns and a host of cups since making his debut as a teenager against Everton in March 1991.

A one-club man, the Welshman has become synonymous with the Alex Ferguson era where United dominated English football.

He will now await to see who the club bring in to replace Moyes on a permanent basis -- but whoever takes over appears to have found a gem in young Wilson.

The striker, who has scored goals for United's younger teams throughout his time at the club, is one of the most highly-rated young English players in the country.

A regular for the England under-19 side, Wilson showed his class to net twice before Robin van Persie secured victory.

It was also an emotional night for defender Nemanja Vidic.

The Serbia defender was given a great send-off by the home crowd following his final appearance in an United shirt at Old Trafford.

The 32-year-old, who will join Inter Milan at the end of the season, established himself as one of the best defenders in the Premier League after arriving from Spartak Moscow in 2005.

Vidic won five league titles and the 2008 Champions League during his time with the club but will test himself in Italy's Serie A.

"I had so many great times here," Vidic told the crowd.

"It is hard to speak because of the emotions. Most importantly I would like to thank the players, the manager and all the coaches. Thank you for everything and especially to the fans, you have been fantastic to me all these years."

Meanwhile, in Italy, minnow Sassuolo produced an astonishing 4-3 victory away at Fiorentina to secure three vital points in its battle against relegation.

Domenico Berardi scored a hat-trick for the visiting team and while Giuseppe Rossi managed his first goal since returning from injury, Fiorentina was unable to stave off defeat.

That result ends Fiorentina's hopes of qualifying for next season's Champions League -- which was confirmed by third-place Napoli's win over Cagliari.

Dries Mertens, Goran Pandev and Blerim Džemaili scored the goals to wrap up a comfortable 3-0 win for the home side.