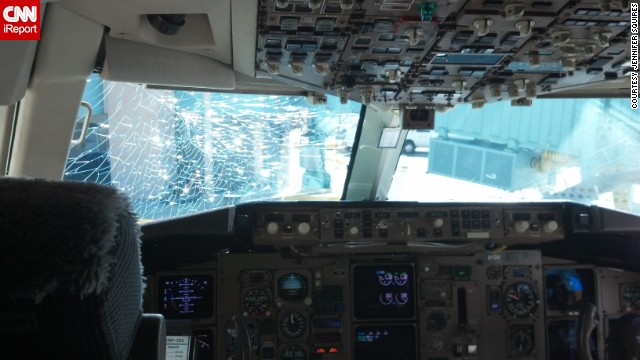 A CNN iReporter caught this picture of her airplane's damaged windshield after landing.
STORY HIGHLIGHTS

(CNN) -- A cracked windshield was not part of traveler Jennifer Squires' flight plan when she boarded a Delta Air Lines flight from Atlanta to Los Angeles on Saturday, May 3.

The Boeing 767-300 aircraft was flying at 38,000 feet when the pilot told passengers over the intercom that they would be making an emergency landing in Albuquerque, wrote Squires, via e-mail.

"I immediately thought someone was ill," she wrote. "A few minutes later he (the pilot) told us that because of pressure, the windshield in the cockpit arched, bubbled, and then shattered."

Not the entire windshield, clarified a Federal Aviation Administration spokesman. "Our initial information was that the outside part of the windshield shattered but the interior part remained intact," wrote FAA spokesman Lynn Lunsford, via email.

"All windows and windshields are at least double paned," said Delta spokesman Morgan Durrant said via e-mail. "This is a rare occurrence but the established procedure is to divert."

There was no loss of cabin pressure, and the airplane landed in about 15 minutes, Squires said. The aircraft had taken off at 8:58 a.m. Eastern Time and landed in Albuquerque at 9:49 a.m. local time (11: 49 a.m. Eastern Time), according to FlightAware.com.

"As I exited the plane, I asked if I could see the damage," wrote Squires, who took her picture at that time. "The pilot and co-pilot were in the cockpit, and I thanked them for getting us down safely."

Squires, who shared the story with CNN iReport, credited the crew's skill and demeanor. "They were very calm. The whole crew was in fact very professional and quite calm. I really didn't fear for my life, and I don't think anyone else was overly reactive or worried."

The airline told passengers it was flying another aircraft from Los Angeles and also offered to re-book passengers on other flights to Los Angeles, Squires said.