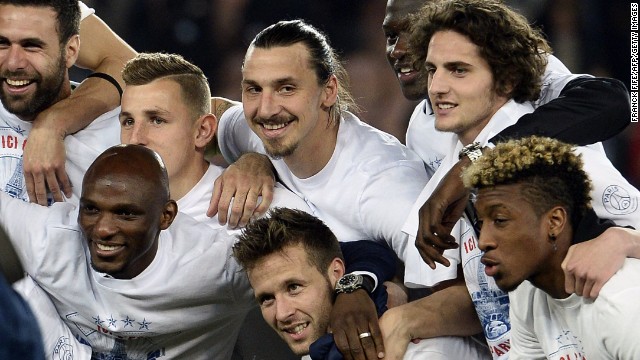 PSG's players celebrate after clinching the league title for the second season in succession.
STORY HIGHLIGHTS

(CNN) -- Without even needing to kick a ball, Paris Saint-Germain was confirmed as champion of France Wednesday.

PSG was crowned winners for the second season in succession following Monaco's 1-1 draw against Guingamp.

The result left PSG with an unassailable seven point lead and sparked wild celebrations before the team's game at Parc des Princes.

Monaco had appeared set for victory when Dimitar Berbatov headed home in the 77th minute only for the visiting side to level through Fatih Atik.

With the title wrapped up, PSG appeared to take its foot of the gas against Rennes -- losing 2-1 after taking an early lead through Ezequiel Lavezzi.

The visitors hit back through Foued Kadir and Paul-Georges Ntep to snatch victory.

Defender Alex had a great opportunity to equalize late on but his effort hit the crossbar.

PSG, which had already won the League Cup earlier in the season, has led the league title race since it thrashed Bastia 4-0 in October.

Laurent Blanc, the club manager, led his side to the quarterfinals of the Champions League where it was beaten by Chelsea.