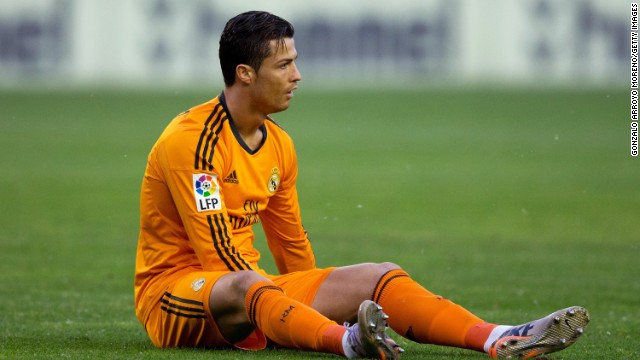 In a season where Real Madrid has appeared irrepressible at times, a 1-1 draw against relegation-threatened Valladolid was not what manager Carol Ancelotti might have anticipated.

A ninth minute injury to Cristiano Ronaldo, making him doubtful for this weekend's game against Celta Vigo and perhaps even the Champions League final, merely rubbed salt into the wounds.

Ronaldo appeared to leave the field as a precautionary measure with a hamstring strain before his teammates were forced to settle for a frustrating point against a resilient Valladolid.

The result leaves Real four points adrift of leader Atletico, who face Malaga on Sunday before a final day showdown with Barcelona.

"It is practically gone now but while there is a mathematical chance then Madrid are obliged to keep going," goalscorer Sergio Ramos told reporters.

"It has been a long season and it takes its toll on the body.

"We wasted a unique opportunity and we will now have to examine it calmly. With 10 minutes to go we relaxed, and against a side battling for survival, they are always going to make it difficult for you,"

The title is now surely between leader Atletico Madrid and second place Barcelona.

Should Barcelona defeat Elche, it will need to see off Atletico at Camp Nou to claim the title.

Real, which began the contest without the injured Gareth Bale, adjusted to the loss of Ronaldo and moved ahead 10 minutes before the break.

Ramos, who has scored five goals in his past four games, unleashed a fine free-kick from 25-yards which flew into the net.

The home side, which has struggled throughout the season for goals, improved after the interval and slowly took the initiative.

The loss of Ronaldo, who has scored 31 league goals this season and 50 in all competitions, will be of greatest concern to Ancelotti.

Real faces Atletico in the Champions League final on May 24 in Lisbon and will be keeping a close eye on the Portugal midfielder over the next week.

Anceloitti's side, which takes on Celta Vigo in its next match, finishes the campaign at home to Espanyol on May 18.