Part of complete coverage on
Best of USA
SHARE THIS 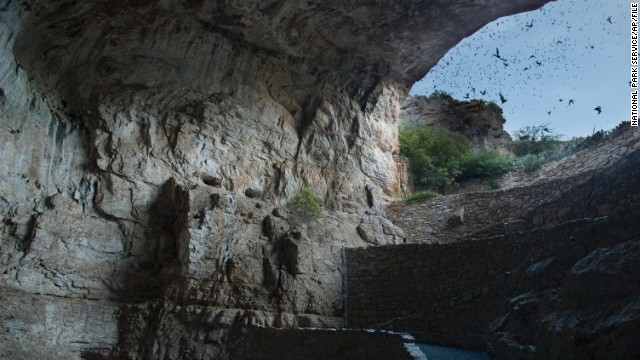 Thousands of bats swarm out of the cave mouth each evening at sunset in Carlsbad Caverns National Park in New Mexico to hunt for bugs for food. (If you're an early riser, they return to the caves in the pre-dawn hours). The best flights to see usually occur in July and August. 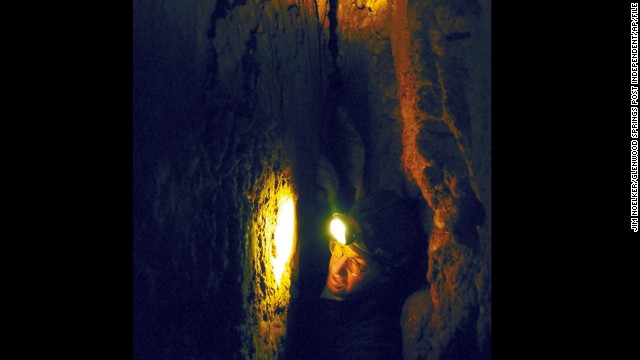 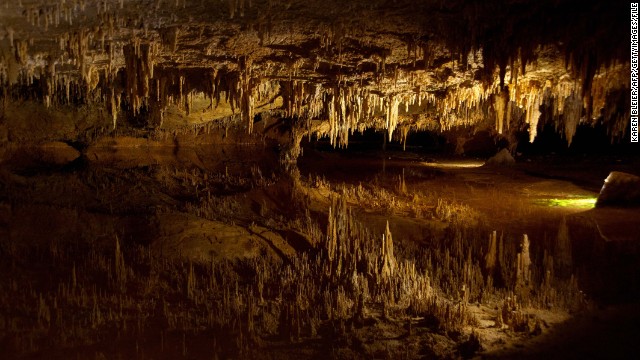 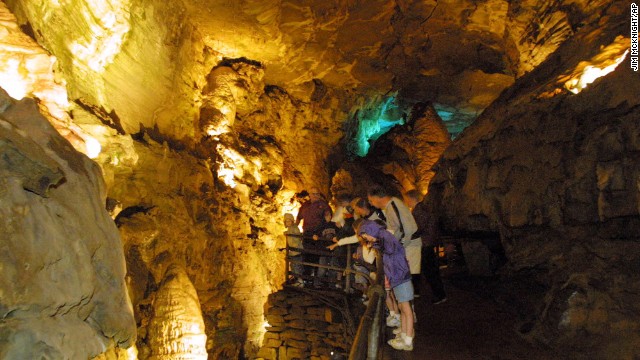 It might get hot above ground in upstate New York during the summer, but Howe Caverns at Howes Caves will be noticeably cooler underground. 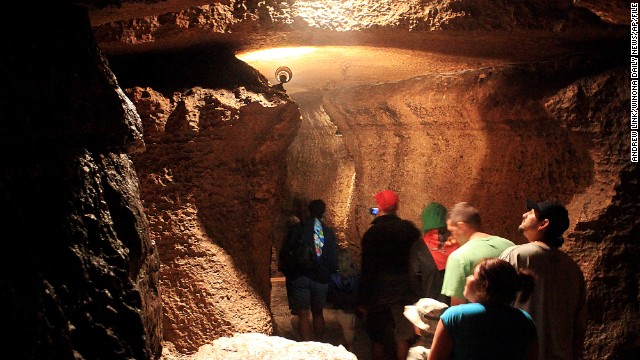 Niagara Cave near Harmony, Minnesota, has a 60-foot waterfall and an underground wedding chapel. 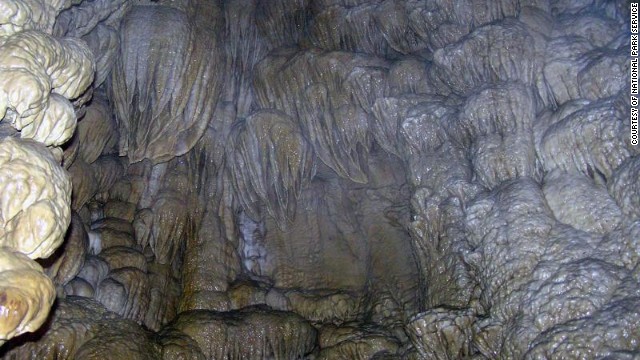 The Oregon Caves National Monument is one of the few known marble caverns, featuring rooms such as Paradise Lost, shown here. 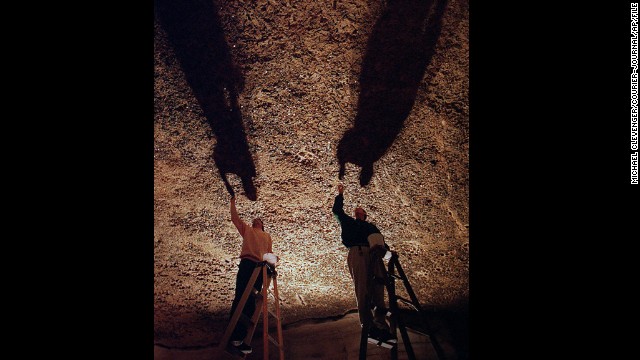 Marengo Cave visitors have tossed coins toward Penny Ceiling, where they get stuck in its soft, claylike surface. Every few years, staffers remove them, shown here. 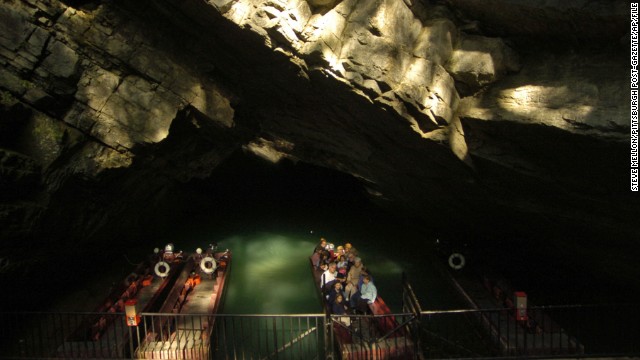 (CNN) -- Far beneath our feet, amazing caverns yawn and twist.

The heart of anyone who stumbles on one must race with the thrill of discovery as well as a terror of encountering creatures in the dark.

Formed by geological processes over thousands of years, caves in the United States were often used by Native Americans well before Europeans arrived.

Though mapped, excavated and fitted with lights and guard rails, "show caves" -- those open to the public for tours -- are still fascinating to explore, especially when the sun burns hot above.

The most famous of America's underground destinations is the 46,000-acre Carlsbad Caverns National Park in New Mexico.

Visitors can take a self-guided tour of the main rooms, or a ranger-led foray into creepily named niches such as the Hall of the White Giant, the Rookery and Spider Cave.

Speaking of creepy, swarms of bats make a great show for visitors during summertime, leaving the cave each evening and returning in the early hours; call the park (575-785-3012) for exact times to watch their flight.

Entrance fee is $10 for adults, free for children 15 and under. Guided tours are extra and vary in difficulty, length and age requirements. For guided tour reservations, call 877-444-6777 or visit recreation.gov.

In the 1890s, the Fairy Caves in Glenwood Springs became some of the first caves in the world lit with electric lights.

Following an 82-year closure, they reopened in 1999, and today visitors ride gondolas up a 4,300-foot tramway to the entrance. The original Fairy Caves, which contain nooks such as the Exclamation Point lookout and Eternal Towers underground canyon, were damaged by exposure early on but are undergoing gradual restoration.

The fully preserved Glenwood Caverns section can be seen on foot or via a more challenging crawling tour.

They're also reminiscent of giant church organs, and in the 1950s mathematician Leland Sprinkle rigged up the Great Stalacpipe Organ, a contraption with mallets that strike stalactites to produce an otherworldly sound. It's played for every tour by an automated system.

Admission -- including tour and entrance to Luray Valley Museum -- is $29 adults, $17 children 6-12 and free for children 5 and under. Tickets to a Garden Maze and Rope Adventure Park on site can be bought separately. 540-743-6551; www.luraycaverns.com

In a pasture 40 miles west of Albany in 1842, Lester Howe noticed his cows gathered on a spot where cool breezes could be felt. His investigations led him into dark recesses extending 15 stories below ground, including a subterranean lake extending for a quarter mile.

Contemporary visitors to Howe Caverns can take a 90-minute walking tour with boat ride, a two-hour lantern tour that recreates the lighting of Howe's early descents, or a two-hour spelunking tour.

The traditional tour is $25 adults, $13-$21 for children 5-15 and free for children under 5. Reservations are required on lantern and spelunking tours, which are $35 and $108, respectively, and have age and fitness requirements. Outside attractions such as a rock wall, air jumper and ropes course are ticketed separately. 518-296-8900; www.howecaverns.com

Like Niagara Falls, Niagara Cave has made a name for itself as a home for romance and matrimony: Its underground wedding chapel has been the site of more than 400 nuptials.

Well-preserved marine fossils dating back hundreds of millions of years are another highlight of the hourlong tour, which costs $14 for adults, $8 for children 4-12, and is free for children 3 and under. 800-837-6606; www.niagracave.com

Nicknamed "the Marble Halls of Oregon," the Oregon Caves National Monument is one of the few marble caverns to be found.

It features rooms such as Paradise Lost, the Ghost Room and Banana Grove; an underground stream called the River Styx; and hunger-inducing formations named for popcorn, bacon and soda straws.

Discovered by a 19th-century bear hunter, the cave contains the 50,000-year-old remnants of a grizzly, among other fossils.

Accounts of Marengo Cave's discovery differ in their details, but the story of a young brother and sister who ventured in with candles in 1883 is enchanting enough to be represented on the attraction's logo.

Choose from a 40- or 60-minute guided walking tour; the latter takes in the Penny Ceiling, an upside-down wishing well where coins tossed upward stick to thick silt.

Don't feel like trekking? Consider Penn's Cave, where you cruise along an underground stream, watching trout swim below and formations drift by.

One stalagmite is dubbed "the Statue of Liberty," but these caves were known well before that landmark was built. A fanciful legend describes an 18th-century French trapper who eloped with the Indian maiden Nita-Nee against Indian custom and was left to perish in the cave's far reaches.

You don't have to be an adrenaline junkie to take a dare.
Nature's most spectacular shows
updated 1:23 PM EDT, Wed April 23, 2014

Fireworks are fantastic and human endeavor has its place, but sometimes Mother Nature outshines any performance we can produce.
29 beach photos that'll make you drool
updated 2:09 PM EST, Sat February 22, 2014

Check out the photos CNN.com readers have shared and submit your own.
Blood Falls and other natural oddities
updated 5:25 PM EST, Fri January 17, 2014

Earth never stops surprising us. Every corner of the planet offers some sort of natural peculiarity.
10 things you didn't know about Las Vegas
updated 10:58 AM EDT, Wed July 23, 2014

Not many cities evoke as many instant associations as Las Vegas.
ATL24: A day in the life

For 24 hours, we made the world's busiest airport our destination and found a world unto its own. Join us on our journey. What you see will surprise you.
22 can't-miss U.S. beaches
updated 3:34 PM EDT, Tue August 13, 2013

Beaches along the coasts of the United States call to shoreline explorers year-round.