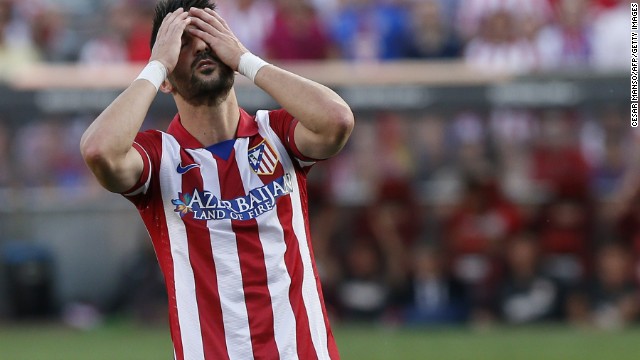 David Villa puts his head in his hands as Ateltico Madrid draw 1-1 with Malaga.
STORY HIGHLIGHTS

All three sides challenging for the Spanish title failed to win on the season's penultimate weekend ensuring the title race will go to the final day.

Atletico Madrid drew 1-1 at home to ten-man Malaga, Barcelona were held to a scoreless draw away to Elche while Real Madrid fell to a 2-0 defeat at Celta Vigo.

The results mean only Barcelona or Atletico can now win the title.

Both sides will face each other in the season's final round of fixtures at the Nou Camp next weekend in what is sure to be a dramatic and emotional occasion.

Atletico will be particularly disappointed with their failure to win Sunday as three points against 13th placed Malaga would have seen them crowned champions in front of a passionate Vicente Calderon crowd.

The Rojiblanco, who were without top scorer Diego Costa due to injury, missed numerous chances in the first period and fell behind in the 66th minute after mistakes by defender Toby Alderweireld and goalkeeper Thibaut Courtois.

Alderweireld allowed an aimless long-ball bounce over him enabling Malaga striker Samuel Garcia to nick the ball off Courtois who had come needlessly charging from his goal in an attempt to make up for his teammates initial error. Garcia then composed himself before bundling the ball into the empty Atletico net.

Lesser teams may have crumbled under the pressure of such a misstep but Atletico and Alderweireld were undimmed by their carelessness and hit back shortly after.

The Belgian defender rose to head a Diego Ribas corner beyond Malaga goalkeeper Willy Caballero to level the scores at 1-1 after 74 minutes.

Aware Barcelona were being held and Real losing, Atletico went for the kill. Caballero saved well from David Villa twice before Malaga were reduced to ten men after defender Marcos Angeleri was harshly shown a second yellow card for bringing down Villa at the edge of the away side's penalty box.

Jose Sosa hit the side netting from the resultant free-kick as injury time approached -- but Atletico would have one final chance to win it.

Adrian Lopez tip-toed his way into the Malaga box before striking a curling shot that looked to be heading towards the top corner only for another heroic Caballero save to deny the Atleti sub.

Speaking after the match, Atletico manager Diego Simeone maintained he was proud of his team despite the result, telling reporters that "the players gave their maximum."

The Argentine also revealed he hopes star striker Diego Costa will be fit for next weekend's showdown where "nobody believes we can win in Barcelona."

While that last comment may be an early attempt at mind games, Atletico's draw means Barcelona's failure to win at Elche is not as catastrophic as it could have been.

The Catalan's will still have to beat Atleti on the final day to secure the championship, however, something they have failed to do in five attempts this season.

Andres Iniesta came closest for a laboring Barca against an Elche side who are struggling to avoid relegation.

The Spanish international midfielder smacked the crossbar with a ferocious first-half volley while Alexis Sanchez and Lionel Messi also both missed good opportunities to secure victory.

"What a league final awaits us on Saturday," tweeted Iniesta after learning of Atletico's failure to win. "With our people we can get it."

While Barca and Atletico have one final chance to claim glory next weekend, the same cannot now be said for Real Madrid.

A dithering Sergio Ramos was dispossessed by Celta striker Charles Dias de Oliveira who went on to round Diego Lopez and fire the ball into the Madrid two minutes before half-time.

After the match, dejected Real Madrid midfielder, Isco, told the club's website that Real had "let the league slip because of our own mistakes."

"Now we just have to learn from it and put our minds on the last league match as a preparation for the final of the Champions League."