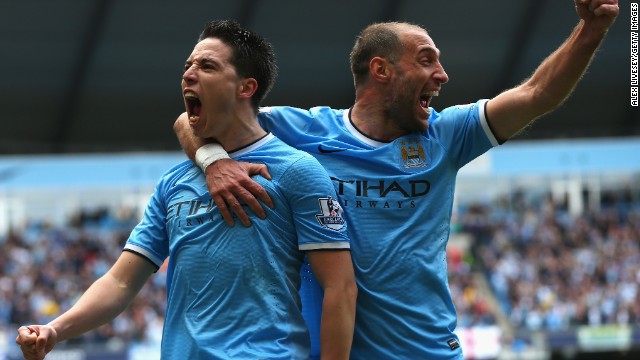 (CNN) -- Manchester City are the champions of England once more after clinching the EPL title on the season's final day.

City defeated West Ham 2-0 at the City of Manchester Stadium Sunday putting them out of reach of second placed Liverpool who themselves defeated Newcastle United 2-1 at Anfield.

Samir Nasri and Vincent Kompany scored the goals for City on a day that was less dramatic than the last time the blue half of Manchester secured the Premier League crown (City scored two injury time goals against QPR to win the title in the final game of the 2012 season) but the celebrations were just as jubilant and colorful.

Triumphant City fans invaded the pitch to congratulate their heroes at the final whistle, setting off flares and blue smoke bombs before clearing away so the trophy could be presented.

"It's an amazing feeling. There is no word to explain our feeling right now," City's French midfielder, Nasri told Sky Sports after the final whistle.

"I'm just so happy for the manager (Manuel Pellegrini) as well because its his first title in Europe. He's done an amazing job. He remained calm all season."

The triumph marks City's second title win in three seasons but just the fourth in the clubs 134-year-history.

Bankrolled by the immense wealth of Sheikh Mansour bin Zayed bin Sultan Al Nahyan and the Abu Dhabi Investment Group, City have been a near unstoppable attacking force all year.

Big money signings such as Yaya Toure, Sergio Aguero, Alvaro Negredo, David Silva and Samir Nasri -- all brought to the club in the time since Sheikh Mansour's reign began in 2008 -- have each been outstanding.

"I manage a great group of players and a great institution," said City manager, Pellegrini. "(It's a) very special group. Maybe they were in a difficult moment when I arrived. They believe in the way I play and we try to play the year in the right way."

"This whole year comes from a lot of work without and within ... at the last, this was the best team in the league.

City's captain Vincent Kompany added to his manager's sentiments: "I'm so happy. I think this team has more than just talent. It's got heart and real soul."

Over at Anfield, the mood was decidedly less celebratory despite the home side coming from behind to beat Newcastle United 2-1.

Eleven consecutive victories had made Liverpool favorites for the title before they dropped points at home to Chelsea and then away Crystal Palace in recent weeks.

Victory on the final day means they finish the season two points behind City in second place.

Liverpool Captain Steven Gerrard was magnanimous in defeat although put perspective on what was ultimately a successful year for the Anfield club whose main aim was to finish in the top four and secure a Champions League place for next season.

"(I'm) absolutely devastated, I can't sugar coat it. (But) we can't be too down its been a fantastic season. We need to bounce back and try go one better (next year)."

"We have to congratulate Manchester City. They been the best over 38 games so congratulations to them."

"To get to the top four was the aim. Its a real compliment that people have seen us challenging," Rodgers added.

Elsewhere in England, Norwich City's relegation was confirmed by a 2-0 defeat at home to Arsenal.

The Canaries required victory and a massive swing in goal difference to have any chance of beating the drop.

Goals from Aaron Ramsey and Carl Jenkinson, however, ensured Arsenal would go into next week's FA Cup final with Hull in buoyant mood.

The only team that Norwich could have caught, West Brom, lost 2-1 at home to Stoke although the result was of little relevance due to Arsenal's victory.

Ryan Giggs' time in temporary charge of Manchester United came to an end with a 1-1 draw at Southampton. England striker Rickie Lambert gave the Saints the lead before Juan Mata equalized for United.

Giggs is widely expected to be replaced in the United hotseat by current coach of the Dutch national team, Louis van Gaal in the coming weeks.

Everton secured fifth position and a place in next season's Europa League with a 2-0 victory away to Hull City while Tottenham overcame Aston Villa 3-0 at White Hart Lane.

In the day's remaining fixtures, Chelsea came from behind to beat already relegated Cardiff City, Fulham and Crystal Palace drew 2-2 while Swansea defeated in-form Sunderland 3-1 at the Stadium of Light.