Manuel Pellegrini: I want to build a dynasty at Manchester City 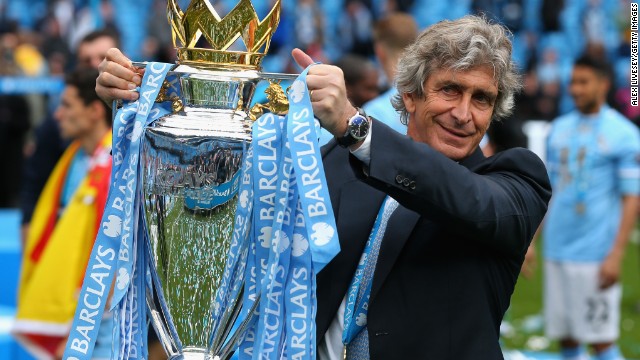 The 60-year-old, fresh from leading City back to the top of English football at the first attempt, is already planning for next season -- and, by the sound of it, many years to come.

Pellegrini, who signed a three-year deal last June after replacing Roberto Mancini, also won the League Cup and reached the last-16 of the European Champions League.

It comes at a time when city rival Manchester United is in disarray, struggling to fill the vacuum left by Alex Ferguson, who led the Old Trafford club to unparalleled success over two decades.

"It depends on the owners of the club," Pellegrini told CNN when asked about his plans to take City forward.

"My way of thinking is that if you want to develop a club, the best way is to keep the manager for so many years if you can.

"Of course, at important clubs, the results are always very important, but with patience I think you can do better.

"A big club must always have ambition. We will start thinking about how we can improve, we will analyze a lot of things and will try and be a very competitive team next year in the Premier League, FA Cup and Champions League."

Under Pellegrini, City has become a far more attractive side to watch and the team's goalscoring record has been remarkable.

In the Premier League alone, City plundered 102 goals in 38 games, while also triumphing at Wembley by defeating Sunderland 3-1 in the League Cup final.

Yaya Toure scored 20 league goals from midfield, while Sergio Aguero -- who missed a large part of the season through injury -- hit 17, and fellow striker Edin Dzeko came up trumps with 16.

The shift in style from a more cautious approach adopted under Mancini has been well received by the City fans, and Pellegrini feels vindicated after the early doubts surrounding his appointment.

"It's a style of football that I've played wherever I've worked in South America and different countries such as Chile, Argentina and Ecuador," said Pellegrini, who then went on to manage Spanish clubs Villarreal, Real Madrid and Malaga.

"I also tried to play attractive football in Spain and be an offensive team. So doing it in a new league and the most difficult league in the world, it's not just about winning the title it's about winning with a style of football.

"I don't want to compare one with the other. Roberto won a title before me and had another idea of the best way to play. I think he was very important for the club also."

One area in which City is yet to taste success is the Champions League -- which its owners are desperate to win.

In May 2013, chief executive Ferran Soriano stated that he wanted the club to win "five trophies in the next five years."

"I think we were very unlucky in the Champions League," added Pellegrini, whose team lost to Barcelona in the second round.

"But I'm sure that we've made a step forward this year and I hope next year will be better, including the Champions League."

In recent weeks City has reportedly been in discussions with UEFA as to the severity of sanction it will face under the European governing body's Financial Fair Play regulations.

The 73-year-old was presiding over the investigatory chamber of the Club Financial Control Body, and was expected to sign off any agreement with the Premier League club.