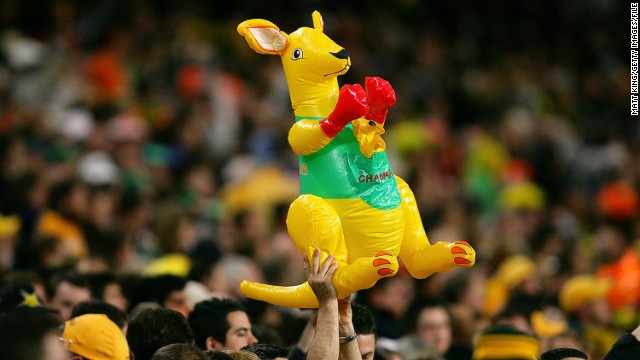 Hopping mad: Australian football fans and officials are not impressed by the slogan that will adorn their team bus this summer.
STORY HIGHLIGHTS

(CNN) -- A ball hasn't been kicked yet, but have we seen the World Cup's first own goal?

Football fans around the world have been having their say on social media after FIFA announced the results of a slogan competition run by Korean car company Hyundai, one of the tournament's sponsors.

The "winning slogans," which will be emblazoned on team buses for the month-long event, are anything but in some fans' eyes.

News that the Australian team bus will wear the words "Socceroos: Hopping Our Way Into History!" was met with derision.

"Whose mum came up with that ultra cheesy slogan?" read one tweet.

Australian Football Federation CEO David Gallop took an equally dim view of it as the country's 30-man preliminary squad for Brazil was announced.

"Don't worry too much about the other slogans that you might have read about. Just say, 'Go you Socceroos,' " Gallop said, The Australian reported.

Right now in sponsorship, and football generally, there is a big emphasis on fan engagement.
Simon Chadwick, Coventry University

Other national teams' nicknames have been put to better use, with Ghana's slogan perhaps being the highlight.

The quarterfinalists in South Africa four years ago will travel in a bus bearing the phrase, "Black Stars: Here to illuminate Brazil," while Ivory Coast's slogan, "Elephants charging towards Brazil!" also has some fun with the team's alias.

Other teams, however, will have to make do with more enigmatic messages.

One of the tournament favorites, Argentina, won't win any prizes for "Not just a team, we are a country," and nor will 2006 champions Italy with "Let's paint the World Cup dream blue."

The Japan world cup slogan is brilliant "SAMURAI, THE TIME HAS COME TO FIGHT !"

The U.S. stick with the motoring theme with "United By Team, Driven By Passion," while Dutch fans will hope the slogan "Real Men Wear Orange" can help steer the Netherlands all the way this time around after losing to Spain -- "Inside our hearts, the passion of a champion" -- in the 2010 final.

"In principle, at least, it was a good idea to run this competition ... but quite how significant and far-reaching having a slogan on the side of a bus is a moot point," Simon Chadwick, professor of Sport Business Strategy and Marketing at the UK's Coventry University, told CNN.

"I think there is a broader issue about corporate influence on the World Cup and on football in this.
Simon Chadwick, Coventry University

"Right now in sponsorship, and football generally, there is a big emphasis on fan engagement -- trying to get the fans as close as you possibly can to having an association with the sponsorship deal you are involved in," he told CNN.

"Effectively what you've got here is a collective view of what your country brand stands for. By using these slogans you are positioning your country as a brand in a particular way.

"So, if you look at Greece for example -- 'Heroes play like Greeks' -- you're then into Trojans, (being) resolute, and that works very, very well, and Japan -- "Samurai, the time has come to fight!

Why must we keep embarrassing ourselves on a global stage, Hopping our way into history.. Really @Socceroos?? #Brasil2014

"These are, in many ways, all very good positioning statements or very good brand slogans."

But Chadwick has some sympathy for Gallop and the Australian team.

"How is it that a commercial partner of FIFA rather than the football association itself decided what would be on the side of the bus?" he says.

"I think there is a broader issue about corporate influence on the World Cup and on football in this.

"It's an issue about joined-up thinking. I can understand why FIFA has done this, but I don't think you can do it without involving the national association as well."

Here's the list in full. Let us know what you think.

Not Just A Team, We Are A Country

Socceroos: Hopping Our Way Into History!

Dragons In Heart, Dragons On The Field!

Brace Yourselves! The Sixth Is Coming!

A Lion Remains A Lion

Here Travels A Nation, Not Just A Team!

My Passion Is Football, My Strength Is My People, My Pride Is Costa Rica

With Fire In Our Hearts, For Croatia All As One!

One Commitment, One Passion, Only One Heart, This Is For You Ecuador!

The Dream Of One Team, The Heartbeat Of Millions!!

Impossible Is Not A French Word

One Nation, One Team, One Dream!

We Are One Country, One Nation, Five Stars On The Heart

Samurai, The Time Has Come To Fight!

Only Together We Can Win

The Past Is History, The Future Is Victory

No One Can Catch Us

Inside Our Hearts, The Passion Of A Champion

United By Team, Driven By Passion