Sharapova out of Rome as Murray sets up Nadal meeting 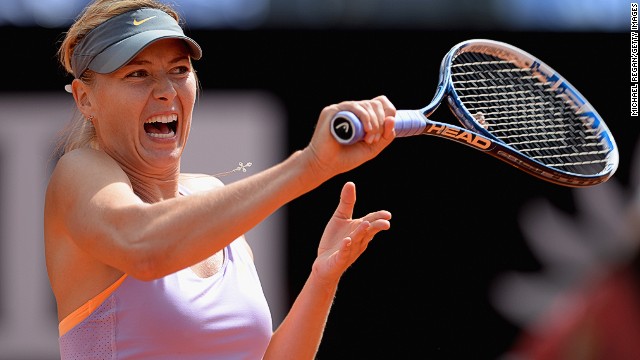 (CNN) -- It was a bad day on the clay for Maria Sharapova as she was bounced out of the Rome Masters by Ana Ivanovic, Thursday.

It was the first time anyone other than world No.1 Serena Williams had beaten the Russian on the red stuff since the 2011 French Open.

Sharapova had been tuning up for this year's grand slam at Roland Garros in fine fettle, winning tournaments in Stuttgart and Madrid, but Ivanovic stormed to 6-1 6-4 victory to end her run in the third round of the Rome event.

"My energy level today maybe was not the best," Sharapova told reporters in Rome. "But Ana played a really great match, she came out with winners from all over the court and she was the better player.

"This can't take anything away from the last two weeks and I'm quite excited for the week coming up for the grand slam."

Great match today guys! Thank you for all your messages. Very proud of all the efforts. Looking forward to tomorrow's match #ajde 💪😊🇮🇹#rome

Wawrinka, the world No.3, said the upset would make no difference to his preparations for this month's French Open.

"I am not focused on winning the French Open, it's so far away and there are so many players ready to win," he said.

"I know if I am ready, feeling good and my level is there to win a lot of matches but I don't expect to win the French Open.

"There's Rafa, you have Novak, Roger is going to be ready and fit. I need to focus on myself, on the draw, and to be ready."

Murray celebrated his 27th birthday with victory over Jurgen Melzer while Nadal cruised past Mikhail Youzhny.

The Wimbledon champion revealed low-key birthday celebrations before turning his thoughts to his first meeting with Nadal since 2011.

"I've had two cards and two cakes, but no presents or anything," said Murray. "I'm hoping when I go home there will be some. If there isn't a couple I will be pretty disappointed.

"It won't be a bad thing to play against Nadal. I haven't played him for maybe three years.

"With the French Open and Wimbledon coming up I haven't practiced with him hardly at all either, so I would be quite interested to play against him before to see how his game has changed.

"It might be better to play against him now instead of the French or Wimbledon."