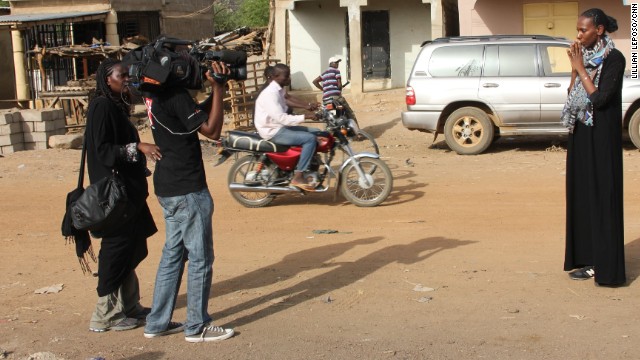 Nima Elbagir (right) and the CNN crew in Chibok, Nigeria after more than 200 schoolgirls were taken from the town.
STORY HIGHLIGHTS

(CNN) -- The militants pulled into the northeastern Nigerian village of Chibok under cover of darkness, their target a girls' boarding school filled with students ahead of final year exams.

Armed and wearing military uniforms, they told the girls they were there to protect them.

The girls started to assemble in the yard as ordered to, not realizing the men were from Boko Haram -- the group whose name roughly translates as "Western education is sin" -- until it was too late. More than 200 were loaded onto trucks and spirited away: the group's leader later announced that he would sell them. 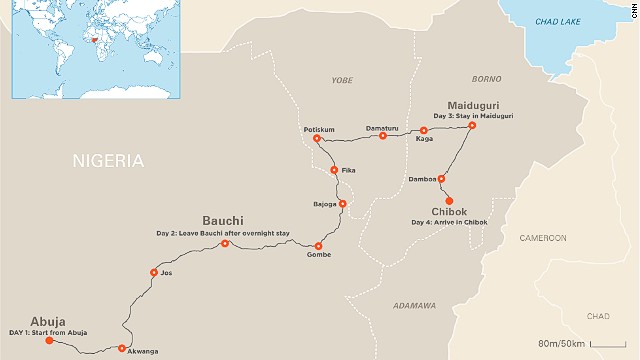 Since the mass abduction on April 14, the world's attention has been focused on Chibok, but CNN was the first global news organization to send a team to the scene of the atrocity.

The journey from the relative safety of Nigeria's capital, Abuja, to the remote countryside stalked by Boko Haram can take eight to 10 hours, but logistics and security concerns meant that it took CNN international correspondent Nima Elbagir's team four days to complete the trek.

For most of the route, the road was tarmacked and the team constantly stopped at checkpoints manned by the military, police or vigilantes looking out for militants. But for the final 45 minutes the tarmac and checkpoints disappeared and the team swerved through the bleak, potholed landscape at full speed with flak jackets beside them.

Some girls managed to escape Boko Haram, making a desperate dash for freedom after the militants loaded them into cargo trucks.

"We would rather die than go," one of those girls told CNN. With fear in her eyes and voice, the young woman, who asked not to be identified, described what happened on that horrendous night.

Families had sent their girls to Chibok Girls Secondary School for a desperately needed education but Boko Haram's attack left the school a burned-out shell.

Chibok is part of Borno state, where 72% of primary-age children never attended school, according to the U.S. Embassy in Nigeria.

The militants destroyed everything they could at the school. One of the girls who managed to flee said their attack had ended both her education and dreams of becoming a doctor.

Outrage over the mass abduction has prompted a global campaign, calling for the girls to be freed through the Twitter hashtag #BringBackOurGirls.

But in Chibok the outrage is overlaid with despair. CNN's Nima Elbagir spoke to the mothers of two of the missing schoolgirls.

They described hearing gunfire before discovering their daughters had been taken away.

The kidnapping has left an indelible mark on Chibok. During the day, it looks like a normal village. But at night the fear and terror is visible.

The men arm themselves with whatever they can -- machetes, homemade bow and arrows, in the hope that they will be able to protect their families. CNN's team joined them.

Nima and her crew returned to Nigeria's capital, Abuja, safely.

Around the world, the #BringBackOurGirls campaign continues and foreign governments including the United States, Britain, France, Israel and China have offered help to Nigeria's government find the girls.

But the schoolgirls are still missing, their relatives still praying for their return and the residents of Chibok still haunted by the attack that left them cowering in the bush as Boko Haram plundered their village.

Arwa Damon meets two young orphans, now in Niger, whose mother died years ago -- and whose father was killed in a Boko Haram attack in Nigeria.
River between life and death
updated 6:41 AM EDT, Tue June 10, 2014

A small river marks the border between Niger and Nigeria -- a shallow divide between security and the horrors of Boko Haram.
Hunt focuses on Lake Chad
updated 5:59 AM EDT, Tue June 10, 2014

Police in Nigeria's capital Tuesday made a U-turn, saying a ban on protests in support of the more than 200 girls kidnapped in April does not exist.
Official: Kidnapped girls located
updated 2:36 AM EDT, Tue May 27, 2014

A large part of northern and central Nigeria is now at the mercy of intensified attacks by Boko Haram, and the group seems to be embarking on a new phase of its campaign.
Why can't Nigerians watch this movie?
updated 10:02 AM EDT, Wed May 21, 2014

It's one of the most important Nigerian stories to hit the big screen -- yet the director says Nigeria's bureaucracy is purposely preventing its release.
Don't glorify Boko Haram
updated 7:51 AM EDT, Mon May 19, 2014

Opinion: The media turns Boko Haram into 'superstar monsters' -- which is exactly what they want.
Mother of missing girl: 'Our hearts hurt'
updated 8:24 AM EDT, Tue May 13, 2014

CNN's Nima Elbagir speaks with the mothers of two missing Nigerian schoolgirls.
Girl: 'How I escaped Boko Haram'
updated 9:18 AM EDT, Mon May 12, 2014

With fear in her eyes, a young woman tells CNN's Nima Elbagir, the first journalist to visit Chibok, how she fled gun-toting Islamic extremists.
'Now is the time for Afro-realism'
updated 6:39 AM EDT, Fri April 11, 2014

Over the last 20 years, the narrative on the African continent has shifted from Afro-pessimism to Afro-optimism.
Nigerian women got world's attention
updated 7:25 AM EDT, Thu May 8, 2014

Biyi Bandele, who recently directed Oscar nominated Chiwetel Ejiofor in "Half of a Yellow Sun," discusses his remarkable journey.
Bring Back Our Girls
updated 6:24 AM EDT, Wed October 22, 2014

From regular people to celebrities, here are some of the people participating in the movement.
A 'new economy?' Nigerians don't care
updated 5:33 AM EDT, Fri April 11, 2014

Nigeria woke up to a brand new economy, apparently. But the country are suffering and its people responded with a hiss.
Meet 'Nigeria's Mark Zuckerberg'
updated 5:00 AM EDT, Mon April 7, 2014

At 23, many people around the world are still at university -- at that age, Gossy Ukanwoke had already started one.
How 'Africa's Oprah' rules a continent
updated 12:23 PM EDT, Fri April 18, 2014

Oprah, if you're reading this, for goodness sake return this woman's calls.
Are you there? Send your stories

Are you in Nigeria? Share your thoughts on the schoolgirls' kidnapping, but please stay safe.