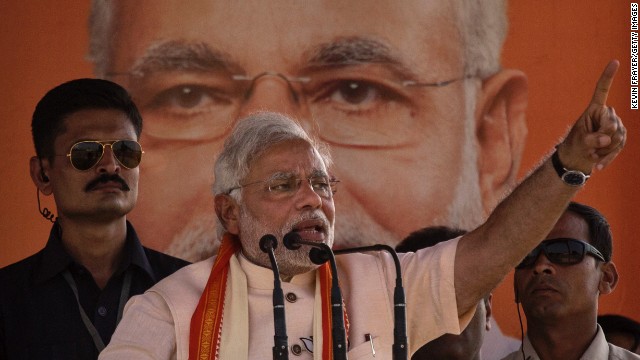 BJP leader Narendra Modi gestures during his speech at a rally by the leader on May 8 in Rohaniya, near Varanasi India.
STORY HIGHLIGHTS

Editor's note: Sunny Hundal is a British-Asian journalist and blogger who has written about Asian issues for a range of publications including The Guardian and The New Statesman. He's founder and editor of left-leaning blog, Liberal Conspiracy. The opinions expressed in this commentary are solely those of the author.

(CNN) -- It appears almost certain that Indians will elect Narendra Modi as their next prime minister following the world's biggest election.

Established as a secular and liberal nation in 1950, India will find itself in uncharted territory as it has never before had a hardline Hindu nationalist at the helm.

This raises an important question: what will Modi the prime minister be like? Will he sweep away the corruption scandals blighting the country's reputation and do a better job of rejuvenating India, or will he inflame religious tensions as some fear?

Much of the criticism aimed at Modi has focused on the riots of 2002 when hundreds, possibly thousands, of Muslims were butchered by Hindu mobs, while his government was accused of standing by and watching. But if a Prime Minister Modi carries on like he did as Chief Minister of Gujarat state and as the candidate for the Bharatiya Janata Party (BJP) during campaigning, there are plenty of reasons to be worried about the future. The future Modi is a terrifying prospect if he is based on the past Modi.

In power, the BJP candidate displayed an alarming disregard for the rule of law, was blamed for exploiting dozens of barely-investigated extra-judicial killings for political gain, swept away criticism of his crony capitalism, surrounded himself with religious zealots and exaggerated his role in economically developing his home state. Plus, comments made by his key allies during the election campaign illustrate that a Modi government will be much less tolerant of criticism, hostile towards press freedom, and further polarize the country along religious lines.

Take the extra-judicial killings as an example. In 2012, the Supreme Court of India ordered an inquiry into at least 20 cases from 2003 to 2006 where it was alleged the police had staged the death of innocent people. Amnesty International says at least 31 people were unlawfully killed by Gujarat police in such "encounters."

In one incident in 2004, the police claimed they had killed four terrorists conspiring to assassinate Modi, including a 19-year-old woman by the name of Ishrat Jahan. Modi openly branded her a terrorist straight after her death despite a lack of evidence. An inquiry by the Central Bureau of Investigation (CBI) later found the entire incident was faked; the four were picked up and killed in police custody while weapons were arranged to stage a shootout. The state government denied Modi was involved and he was never charged with any crime related to the incident.

In 2010, Modi's right-hand man and the Home Minister for Gujarat, Amit Shah, was forced to resign after he was charged over allegations of murder, conspiracy, kidnapping and extortion by the CBI. But during the current election campaign he was by Modi's side, making inflammatory speeches where he talked of "revenge" for the riots in 2002 and telling voters to reject parties with Muslim candidates. The Electoral Commission was forced to ban him from addressing rallies as a result. The charges were eventually dropped against Shah due to insufficient evidence.

But Shah wasn't the only controversial aide on the campaign trail. One key BJP leader, Giriraj Singh, said critics of Modi had a "place in Pakistan and not in India." Another campaign ally, Pravin Togadia, who is president of the BJP's sister-organization, the VHP, said Muslim households should be "evicted" from Hindu areas.

Modi didn't condemn any of these remarks, saying only that he was focused on good governance. But even his record of governing Gujarat is mixed. 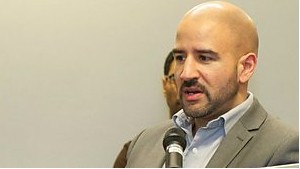 When people claim that Gujarat underwent an economic miracle under Modi, they usually ignore other Indian states. The state of Bihar saw a bigger growth in GDP than Gujarat in the decade from 2000. Over the last three decades, other states such as Haryana, Punjab and Maharashtra had a larger rise in average income per head than Gujarat. The state has undoubtedly done well since the liberalization of the 1990s, but so did the states of Maharashtra, Haryana, Punjab, Kerala, Bihar and Tamil Nadu. Why should Modi alone get credit? It's not explained what he did different to get credit, nor how the Gujarat model can be easily replicated across India.

Meanwhile, Gujarat was declared the most polluted state in 2010, and three of its rivers were found to be the most polluted in India. There have also been accusations of crony capitalism amid allegations the government handed out contracts to Modi allies at rock-bottom prices.

His liberal supporters have deluded themselves into thinking Modi will be too weak to challenge India's liberal and secular institutions, but strong enough to pull the levers to deliver economic growth. He is meant to have micro-managed Gujarat into an economic powerhouse but somehow went missing when massive riots took place under his watch.

The broader context is that India is seeing a rising tide of intolerance whipped up by Hindu nationalist groups that have forced books to be banned, intimidated journalists and threatened people for criticizing their leaders. Modi has always been a member and strong supporter of the right-wing group Rashtriya Swayamsevak Sangh (RSS), an organization that wants to remake India into a Hindu nation, and puts their interests above other groups.

There is little chance that Modi will change his style of governance. Rather than a welcome change, this is the most worrying prospect of all.

READ: What India can learn from China