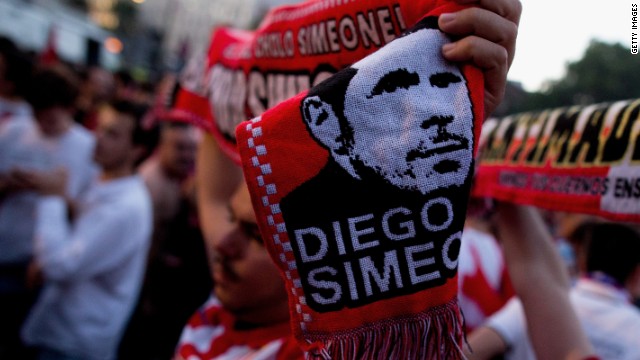 After one of the tightest and most exciting title races in Spanish history, Atletico Madrid was crowned La Liga champion Saturday. The club's resurgence can largely be attributed to coach Diego Simeone. 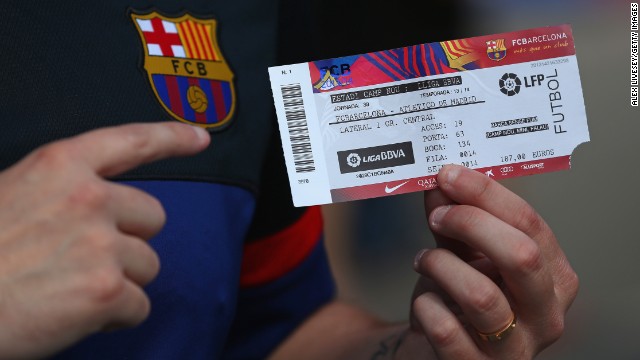 Both Barcelona and Atletico knew that victory would earn them the championship. Here a fan shows off a ticket for the title decider at Barca's Nou Camp. 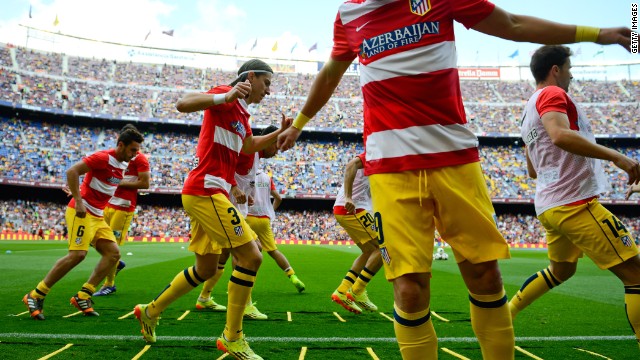 Ateltico Madrid warmed up in front of a partisan home crowd. While more than 90,000 Catalans were in the Nou Camp, less than 500 tickets were given to Atletico fans. 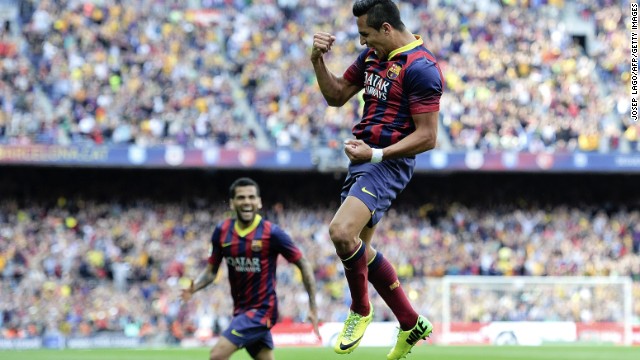 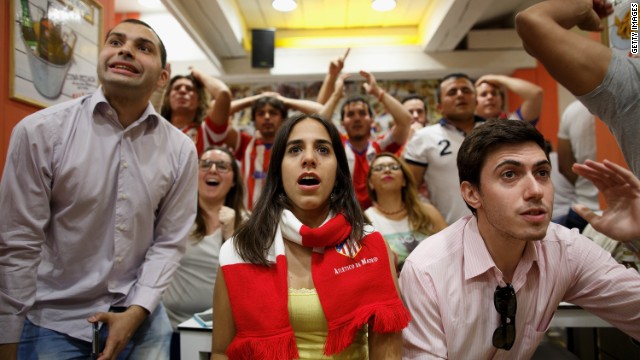 Having gone 1-0 down, Atletico's chances of winning a first title since 1996 appeared slim. Fans watch, rapt, as the match ebbs and flows. 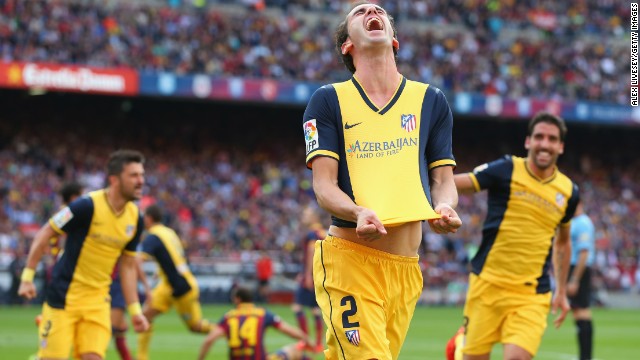 But Diego Godin scored a second-half equalizer, which was enough to seal Atletico's 10th title overall -- 12 behind Barca and 22 adrift of the record held by city rival Real Madrid. 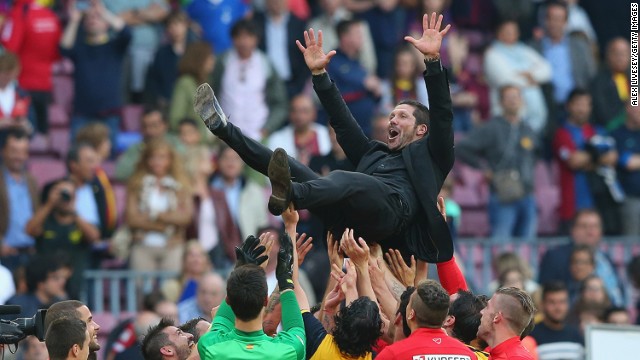 A jubilant Simeone was thrown in the air by his players following the 1-1 draw. 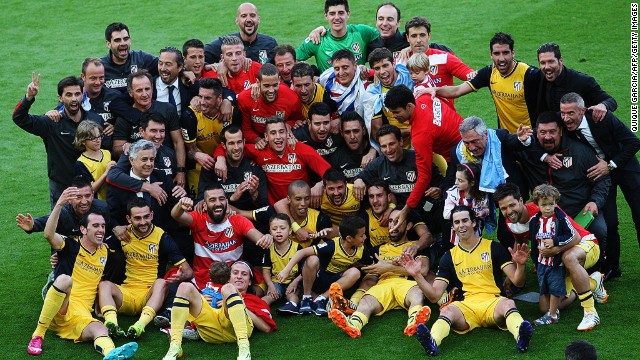 Atletico's players, staff and family members pose for the cameras following a dramatic denouement to the La Liga season. 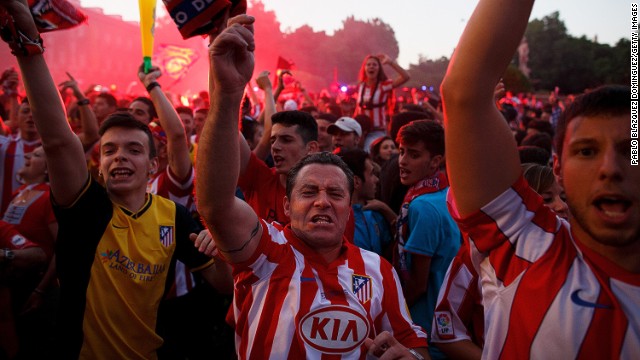 The worry and the waiting is over: Atletico fans celebrate in Madrid's Neptuno Square. 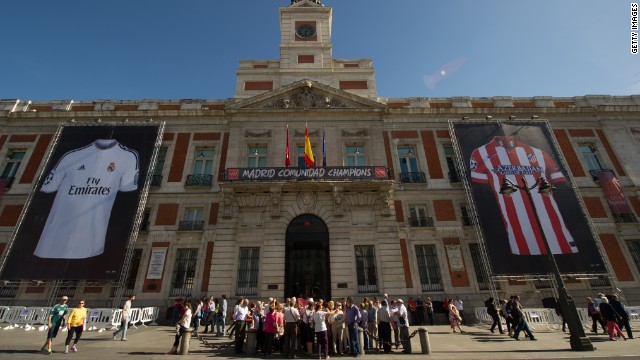 Now attention turns to the UEFA Champions League final next weekend, where Atletico will play Real in a Madrid derby. 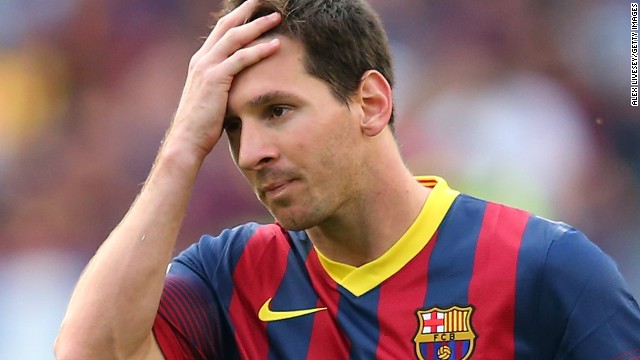 For Barcelona, the future is less certain. Star player Lionel Messi agreed a new contract before the Atletico game, but a new coach will need to revamp an aging squad. 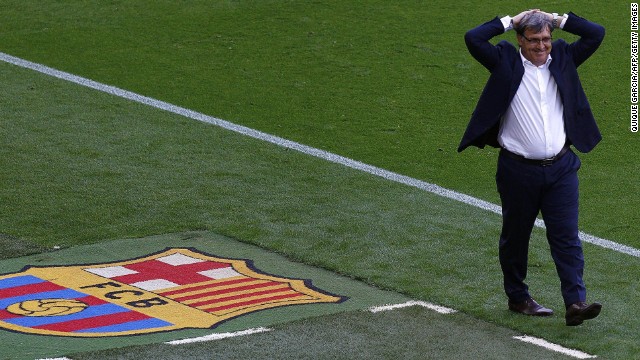 Messi's fellow Argentine Gerardo "Tata" Martino quit after just one season in charge at the Nou Camp, and is expected to be replaced by former Barcelona star Luis Enrique.
HIDE CAPTION
A new reign in Spain
The golden ticket
The pressure is on
First blood: Barca
The magic of soccer
The golden goal
Victory bumps
The underdogs celebrate
Red letter day
Derby day
New era for Barca
Martino departs
<<
<

Barcelona, Spain (CNN) -- In Madrid and Barcelona, they will be talking about this for many years to come.

Of all the ways to break Barca's monopoly on Spanish league titles, going to the home of the champions and robbing them of their crown in their own backyard takes some beating.

In the Catalan heartland Saturday, unfashionable Atletico Madrid produced a storybook ending to one of the most enthralling seasons Spanish football -- or indeed any European league -- has ever produced.

But as Atleti celebrated, the soul searching began in Barcelona.

For the first time since 1951 (and only the third time ever), the destiny of the title lay in the hands of two teams facing each other on the final day. Barca entertained an Atletico team which hadn't won the domestic league since 1996 -- during which time Barca had added eight more La Ligas to the club's roll of honor.

The equation was simple: win, and Barca would be crowned champions for a fourth time in five seasons; draw or win, and Atletico would take the title for the first time in 18 years, when current manager Diego Simeone was captain.

In the end, it was deservingly, fittingly, gloriously Simeone's triumph -- and one that now propels the Argentine coach into the stratosphere, such is the epic scale of the revolution he has presided over since taking charge of "Los Rojiblancos" in December 2011.

A team that rarely won anything, that only found new ways of losing, was at once transformed; Europa League triumph in 2012 was quickly followed by the UEFA Super Cup and then the Spanish Cup in 2013. Simeone had molded and inspired a group of disparate talents into a squad with a win-at-all-costs, never-say-die mentality.

With the league now in the bag too, Simeone and his team have the chance to add the ultimate prize to their ever-expanding trophy cabinet when they meet arch-rivals Real Madrid in Saturday's European Champions League final in Lisbon.

"I would say that this win means something for everyone," said Simeone, who saw his team gain the 1-1 draw they needed despite losing the services of 27-goal striker Diego Costa and midfield mischief-maker Arda Turan inside the first 20 minutes.

"It shows that there is more than one way to win. It is one of the most important days in the history of Atletico Madrid."

Yet how few Atleti were there to celebrate such a seismic feat. Officially, 447 of their fans were present at the 98,000-capacity Camp Nou, though a few others were easily seen dotted around the gigantic arena.

They managed to make themselves heard, however, especially when Diego Godin leveled just after halftime and again at fulltime. The Atleti stayed right where they were for at least an hour after the final whistle to sing and dance and acclaim their heroes.

Those men must have looked tiny, like Subbuteo figures, from their position right at the top of the third tier behind the goal where Godin created history, but it didn't seem to matter one bit.

And to their credit, Barcelona ensured Atleti would have even more treasured memories of their special day as they stayed true to their "Mes que un club" ("More than a club") motto.

'They showed Barca is a great club'

The home fans responded to the apparent ignominy of having their title taken away from them on their own turf by rising as one the very moment the game was over, proceeding to give Atletico's players the standing ovation their herculean effort deserved. Two minutes later and "Atleti, Atleti" reverberated around the amphitheater as Simeone and his gladiators, almost disbelievingly, looked up and soaked in the adulation.

"Barca players and coaches came to congratulate me immediately after the game," added Simeone. "They showed Barca is a great club."

So what of this great club? For one so used to winning and for fans usually so quick to wave their white handkerchiefs as a way of registering their disdain, they seemed awfully accepting of their fate.

The mood in the city all day was upbeat, yet strangely free from the tension that usually engulfs occasions of such enormity; don't forget, this was a title that coach Gerardo Martino had already conceded two weeks ago, before a succession of bizarre results handed his side one last unlikely shot at glory.

It never felt like their title to win, though. With the heartbreaking trauma of ex-coach Tito Vilanova's tragic passing in April still fresh in the mind, and with several players mooted to be leaving this summer, even before Saturday the focus had shifted to next season and the future.

An emotional month reached a crescendo as first long-serving goalkeeper Victor Valdes -- who has been injured since March -- said his farewells on Monday and then on Thursday club captain Carles Puyol, a mainstay of Barcelona since the mid-1990s, gave his final press conference before walking away from the Camp Nou.

It is not so much half a new team Barca are looking for over the next couple of months as almost a replacement soul.

What next for Barca?

Former captain Luis Enrique, who played for the Catalans with distinction between 1996 and 2004 and managed Barcelona B from 2008-11, was appointed Monday as the club's new coach after leaving his post at Celta Vigo.

Enrique led Celta Vigo to ninth place in La Liga in his only season in charge, after a difficult first senior appointment at Italian club Roma in 2011-12.

Now that Lionel Messi -- arguably the world's greatest footballer and certainly its best-paid exponent -- has signed a new contract, Barca must try to rediscover what made them one of the most breathtakingly successful teams the sport has ever seen.

"I feel so bad, I feel disappointment and disillusionment," said midfielder Andres Iniesta on social media. "Next year we will fight to give you the joys that you and this club deserve."

As for Atletico, whose fans celebrated long into the night at Neptuno Square in the Spanish capital and then took to the streets of Madrid Sunday as their champions paraded through the city on an open-top bus, the focus is rather more short-term.

At the Stadium of Light in Lisbon on Saturday, they will seek to put their name on the biggest trophy of them all for the very first time, and in the process deny city rivals Real "La Decima" -- the 10th European Cup/Champions League title that has so frustratingly eluded the club since 2002.

Simeone, a man who has the underdog spirit coursing through his veins, will already be licking his lips in anticipation.